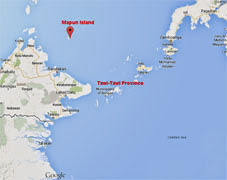 Unidentified gunmen attacked a fishing trawler off the southern Philippine province of Tawi-Tawi and killing its skipper, reports said Monday.

The weekend attack occurred off Mapun Island after a group of armed men on a speedboat hijacked the trawler and shot the skipper. One fisherman jumped off the boat for fear of being killed, but he remains missing.

Nine other crewmen were unharmed by the gunmen, who fled after the shooting. The identities of the slain skipper and the missing crew man were not immediately known, but the trawler came from the province of Palawan and was on a fishing expedition in Tawi-Tawi.

It was unknown if the attackers were locals protecting their rich fishing ground in the area. The trawler has returned to Palawan on Monday.

There was no statement from local authorities on the attack.

http://www.mindanaoexaminer.net/2014/07/trawler-attacked-off-tawi-tawi-province.html
Posted by Retired Analyst at 3:28 AM