Suspect to be arrested for 'cyber sedition' related to Marawi crisis

From Rappler (Jun 13): Suspect to be arrested for 'cyber sedition' related to Marawi crisis

One person will soon be arrested for spreading terrorist propaganda online in relation to the Marawi crises, Information and Communications Technology Secretary Rodolfo Salalima said on Tuesday, June 13.

“May huhulihin na (Someone will soon be arrested), cyber sedition,” Salalima said during a Palace news briefing on Tuesday.

This person is believed to be behind online propaganda in support of efforts to overthrow or subvert the authority of the Philippine government.

In a chance interview, Salalima confirmed the person’s online activities are related to the plot of terrorists, led by the Maute Group, to take over Marawi City.

The Department of Information and Communications Technology (DICT) is “involved” in efforts to track down social media accounts aiding terrorists responsible for the Marawi siege, said Salalima.

“To the extent that they commit cyber crimes, then DICT takes over,” he said.

If operations go smoothly, it’s likely that more than one person will be arrested in the coming days for cyber sedition, the Cabinet official hinted.

“We were able to track about more than one [suspect] last night,” said Salalima.

The DICT chief refused to give more details about the arrest to be made and the agency’s operations against terrorist social media accounts.

On June 9, the Armed Forces of the Philippines (AFP) requested Facebook Philippines to take down 63 accounts being used by the Maute Group and their sympathizers to spread propaganda.

“These 63 accounts are spreading malicious information that affect the information landscape and mindset of every Filipino,” said Army 1st Infantry Division spokesman Lieutenant Colonel Jo-ar Herrera in a Davao City press conference.
AFP spokesman Brigadier General Restituto Padilla also asked Filipino netizens not to spread terrorist propaganda, including a video of terrorists in Marawi ransacking a Catholic Church. He said such videos are used by terrorists to fan hatred between religious groups.

The Islamic State or ISIS, an international terror group the Maute Group and Abu Sayyaf leaders have pledged allegiance to, is known for its use of social media to spread propaganda and recruit members. (READ: How to fight ISIS on social media)

The group has designated Abu Sayyaf leader Isnilon Hapilon as its "emir" in Southeast Asia. Taking over Marawi City was supposed to have been the first major step towards the establishment of an ISIS wilayat or province in Mindanao.

http://www.rappler.com/nation/172796-cyber-sedition-person-arrested-marawi-crisis
Posted by Retired Analyst at 2:12 AM No comments:

The policemen are rescued in a joint operation by the AFP, PNP, local government, and civil society groups 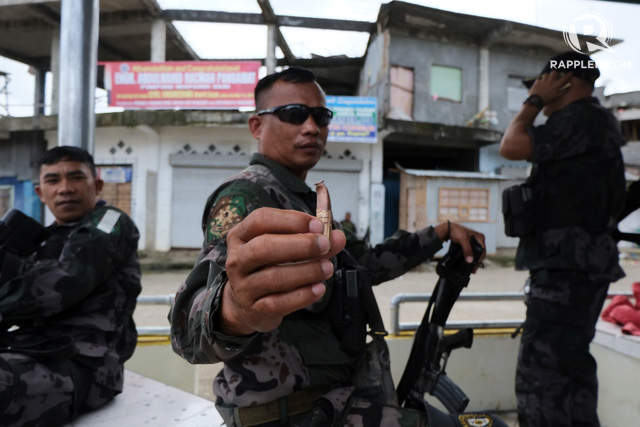 DANGER IN MARAWI. A policeman shows a .50mm caliber bullet from the Maute Group sniper who fired on them. File photo by Bobby Lagsa/Rappler

Five policemen who were trapped in areas dominated by local terror groups in Marawi City were rescued by government forces on Tuesday morning, June 13.

The 5 were rescued alongside 5 civilians through a joint operation by the Armed Forces of the Philippines (AFP), the Philippine National Police (PNP), the local government, and civil society groups, according to Task Force Marawi commander Major General Rolando Bautista.

The PNP had earlier said several of its men were trapped in Marawi City following an attempt by the Maute and Abu Sayyaf terror groups to take control of the city on May 23.

One cop, identified as Police Officer 2 Khomennie Mamalapat, escaped on June 4. He immediately called his direct superior, who then instructed him to report to a nearby police station. His status was confirmed on June 12.

Last Friday, June 9, 13 Philippine Marines were killed after a day-long battle with the local terrorists. The troops were able to push forward against the enemy.

A total of 58 soldiers and police have been killed since the clashes started on May 23. (READ: PH honors 'heroes of Marawi' with noontime salute)

The majority of Marawi City has been evacuated but some civilians remain trapped in areas where the terrorists are concentrated. Over 1,600 civilians have been rescued.

The attempted takeover of Marawi City prompted President Rodrigo Duterte to declare martial law over the entire Mindanao, also on May 23. He suspended the privilege of the writ of habeas corpus as well.

http://www.rappler.com/nation/172805-trapped-police-rescued-marawi
Posted by Retired Analyst at 2:03 AM No comments: 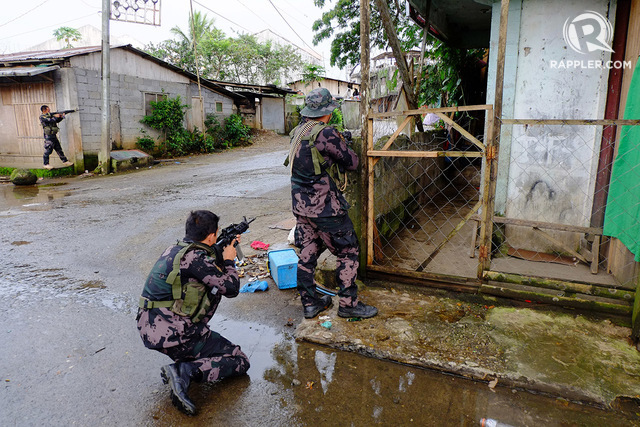 Solicitor General Jose Calida submitted to the Supreme Court (SC) ahead of oral arguments Tuesday, June 13, a consolidated comment that contains some information about the Maute terror group and its supposed links to the Islamic State (ISIS).

Calida's information and assertion in the comment can be gleaned as the government's stance on ISIS, as he is the top lawyer defending President Rodrigo Duterte and his martial law proclamation before the High Court.

In the comment, Calida said the government had known as early as 2014 that there were links to ISIS being established by local groups in Mindanao. This is contrary to the stance taken by government at the time, under former president Benigno Aquino III: there is no ISIS in the Philippines.

Here are some of the other things Calida said about ISIS in his consolidated comment uploaded online by the Office of the Solicitor General (OSG). (READ: Nullify martial law? Your guide to the SC oral arguments)

1. The Philippine link was established as early as 2014.

Citing the Armed Forces of the Philippines (AFP), Calida said propaganda materials obtained from ISIS indicate that local groups had already pledged their allegiance to the caliphate as early as November 2014.

2. There are 4 local groups who have pledged their allegiance to ISIS.

"These groups have formed alliances for the purpose of establishing a wilayah (province) in Mindanao," the Solicitor General said.

3. The military has been monitoring Hapilon since December 2016.

Hapilon and 30 followers, including 8 foreign terrorists, were put under surveillance in Lanao del Sur in December 2016, according to Calida.

Citing military intelligence, the Solicitor General said Hapilon performed a symbolic hijra or pilgrimage to unite with other ISIS-inspired groups in mainland Mindanao.

This, Calida said, marked the start of Hapilon pledging allegiance to ISIS, which ends after 5 steps in the presentation to ISIS leadership for approval. (READ: Admit ISIS presence in the Philippines, analyst says)

4. Hapilon is the designated ISIS emir in the Philippines.
"The appointment of Hapilon as its Philippine emir was confirmed in a June 21, 2016 video by ISIS entitled, 'The Solid Structure.' The video hailed Hapilon as 'the mujahid' authorized to lead the soldiers of the Islamic State in the Philippines," Calida said. (READ: What ISIS follower Isnilon Hapilon's transcripts reveal about his childhood)

5. The military knew as early as April that the Maute Group had moved to launch an attack on Marawi.

The military launched a surgical operation in Marawi on May 23, 2017 with Hapilon as the target. However, Calida said they knew as early as April that the Maute Group was on the move.

"AFP intelligence reports disclose that as early as April 18, 2017, Abdullah Maute had dispatched his followers to the cities of Marawi, Iligan, and Cagayan de Oro to conduct bombing operations, carnapping, and 'liquidation' of AFP and PNP personnel in the said areas."

6. The Maute Group wanted to raze Marawi during Ramadan.

"The ISIS-inspired local rebel groups had intended to burn down the entire city of Marawi on the day of Ramadan, or on May 26, 2017. The said attack would have served as the precursor for other rebel groups to stage their own uprisings across Mindanao in a bid to simultaneously establish a wilayah in the region," Calida said.

"However, the planned attack by the rebels was foiled when government troops attempted to serve the warrant on May 23, 2017. This forced the ISIS-inspired local rebel groups to prematurely execute their planned siege of Marawi," he added.

7. The Marawi attack was a precursor to establishing an ISIS province in Mindanao.

"The unified pledge of local rebel groups to ISIS is a consolidation of their efforts to establish a wilayah in Mindanao – with [the] Marawi siege setting the stage for this purpose," Calida said.

There are 5 steps needed to gain the approval of the ISIS leadership, Calida said, and the 4th "requires the conduct of widespread atrocities and uprisings all across Mindanao."

"In a video recording retrieved by the AFP, Hapilon, the Maute brothers, and other unidentified members of ISIS-inspired local rebel groups in Mindanao were documented while planning the attack in Marawi, as a prelude for another attack outside of the said city," Calida said. (READ: Video shows terrorists planning Marawi attack – report)

These information, cited by the Solicitor General, is his main defense against the petitioners who said the Marawi siege is not an act of rebellion but a mere uprising to protect Hapilon. (READ: Calida invokes technicality to have martial law petitions dismissed)

"The siege of Marawi City cannot simply be characterized as the result of counter-measures against the government's pursuit of Hapilon, but is a strategic and well-coordinated attack to overthrow the present government and to establish a wilayah in Mindanao," Calida said.

http://www.rappler.com/nation/172777-isis-military-marawi-crisis-martial-law-calida
Posted by Retired Analyst at 1:52 AM No comments: