AFP chief on nationwide martial law: 'We can never tell'

From Rappler (Dec 16): AFP chief on nationwide martial law: 'We can never tell'

'It depends on developments and of course it will depend on the actions of the other side,' says Armed Forces chief General Rey Guerrero


"As for the other parts of the country, nobody can tell. It depends on developments and of course it will depend on the actions of the other side," he added.

President Rodrigo Duterte earlier said a nationwide declaration of martial law is possible if the New People's Army (NPA), the armed wing of the Communist Party of the Philippines, grows and becomes a bigger threat after the cancellation of peace talks. (READ: Duterte on nationwide martial law: All options on the table)

Duterte said this will be the call of the military and the police.

Año is now an Undersecretary at the Deparment of the Interior and Local Government tasked to supervise the police. (READ: Duterte generals see no reason for nationwide martial law)

NPA presence is concentrated in Mindanao but they are also active in pockets of Luzon and the Visayas. But Esperon, Lorenzana, and Año said the communist rebels outside Mindanao can be reduced to a police concern.


https://www.rappler.com/nation/191420-general-guerrero-nationwide-martial-law
Posted by Retired Analyst at 10:35 PM No comments: 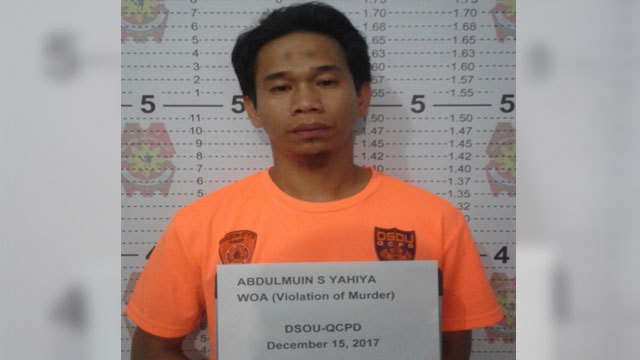 QCPD director Police Chief Superintendent Guillermo Lorenzo Eleazar said 35-year-old Abdulmuin Yahiya was arrested at around 10 am.
He was issued a non-bailable warrant of arrest by the Isabela City, Basilan Regional Trial Court in August 2006. But he remained in hiding as a tricycle driver at the Salaam compound in Tandang Sora Avenue, until his arrest on Friday.

Police suspect Yahiya is part of the Abu Sayyaf because of his close ties with Hadji Taufik Sanihin Yahiya, who used the aliases Nonong Yakan or Nonong Yahiya.

The latter is one of the known hardcore members of the Abu Sayyaf. He is also wanted for 9 counts of murder and 4 counts of frustrated murder.

None of Yahiya's neighbors at the compound knew he has a standing arrest warrant. He was even an active member of the Salaam Crime Watch Group.

(The arrested wanted person became a member of the Salaam Crime Watch Group and he served well, but even if he wanted to change his ways, he still has to answer to the law.)

(That's why I'm so thankful for our Muslim brothersy at the Salaam compound for their continued cooperation and support for our endeavors.)

https://www.rappler.com/nation/191531-qc-police-arrest-suspected-abu-sayyaf-member-murder
Posted by Retired Analyst at 10:28 PM No comments:


AN ALLEGED finance logistics officer of the New People’s Army (NPA) surrendered to the 39th Infantry Battalion on Tuesday, Dec. 12, on its headquarters in Arakan, North Cotabato.

1Lt. Silver Adell Belvis, the civil-military operations (CMO) officer of 39th Infantry Battalion, identified the suspect as alias Danny, who worked for Squad Abe and Front Committee 53 for one year, who brought with him his M1 Carbine rifle.

Danny told soldiers that his NPA commander, alias Jecko, has been pocketing the cash that was promised to them when they joined the rebel group. The commander also allegedly scrimped on food even with all the money they collected.
“The NPA always claims that the government is corrupt but the truth is that they are the ones that are corrupt,” he added.

The surrender of Danny was made possible through the effort of a tribal leader in the locality of Arakan Valley. He will be enrolled in the Comprehensive Localized Integration Program (CLIP) offered to former eebels.

In his statement, Lt Col. Harold Argamosa, commander of 39th Infantry Battalion, noted that many NPA members were tricked by the propaganda of the communist organization. “The challenge is on how to reach this individual in order for them to be enlightened from these communist deceit,” Argamosa said.

“We are always open for those NPA that would like to surrender, there are many ways in addressing your issues, taking up arms should not be the choice,” he added.
http://mindanaotimes.net/alleged-high-ranking-npa-leader-surrenders-to-army/
Posted by Retired Analyst at 10:16 PM No comments:

Authorities have identified suspects in the killing Friday of a barangay secretary in Magpet, North Cotabato.

But Chief Inspector Rommel Constantino, chief of Magpet Police, said they already have the profiles of the suspects but cannot as yet divulge their identities.

Joel Ecnad, secretary of Barangay Manobisa in Magpet town, was gunned down, at around 11:20 a.m. on Friday in a thickly populated community in Poblacion, Magpet, by one of the two armed suspects who wore black bonnets.

Police said that after the gunmen made sure their target was dead, they withdrew to an unknown direction on board a black SkyGo motorcycle without a plate number.

Ecnad’s friend, identified only as Marilyn, was hit by a stray bullet. She sustained a gunshot wound on her left arm.

http://www.mindanews.com/top-stories/2017/12/suspects-in-murder-of-magpet-barangay-secretary-identified/
Posted by Retired Analyst at 10:13 PM No comments:

Six soldiers under the 30th Infantry Battalion sustained minor wounds when a grenade exploded while they were on patrol in a village in San Francisco town in Surigao del Norte Wednesday evening, Major Arvin L. Dugho, the battalion’s press information officer told MindaNews on Saturday afternoon

He said the soldiers were conducting a patrol in Barangay Magtangale at 6:25 p.m. on December 13 when a suspected New People’s Army (NPA) members lobbed a hand grenade.

Injured soldiers were rushed to a hospital in Surigao City for medical treatment.

“No one was seriously hurt and they are now back in the camp,” Dugho said.

http://www.mindanews.com/top-stories/2017/12/6-soldiers-hurt-in-grenade-blast-in-surigao-town/
Posted by Retired Analyst at 10:07 PM No comments:

The Philippine Army (PA) has admitted there are threats posed by a new group of New People’s Army (NPA) in Pangasinan, however, this makes the military more determined to end insurgency in the province.

Colonel Henry A. Robinson. Jr., commanding officer of the 702nd Infantry (Defender) Brigade, admitted that one of PA's targets "is to work for the declaration of Pangasinan as insurgency-free.”

Robinson was here on Thursday when he briefed the Pangasinan’s Peace and Order Council and the Anti-Drug Abuse Council during a joint meeting at the Pangasinan Technology and Development Center here.

He told the councils that the Army is confronted by a new group of communist terrorist named Nueva Ecija-Pangasinan Commission (NEPC).

NEPC is composed of two armed groups: the KLG Caraballo and LGP 1, he said.

He said the KLG Caraballo is operating in eastern Pangasinan, specifically in the municipalities of Umingan, San Quintin, Natividad and San Nicolas.

LGP is found in some municipalities of Nueva Ecija, he said.

Robinson added the 702nd Brigade is exerting all efforts to have the province of Pangasinan declared “peaceful and insurgency-free.”

The Army is conducting anti-insurgency operations which clipped the capabilities of the KLG Caraballo group.

The operations are carried out to minimize the threat of the armed group and to ensure security in the province, he said.

Governor Amado Espino III, chairman of both councils, hailed the initiative of the PA to declare the province as insurgency -free.

He recalled that Pangasinan was first declared insurgency-free in 2010 under the leadership of his father, then -Governor Amado T. Espino, Jr., now congressman of the fifth district of Pangasinan.

Foreign Affairs Secretary Alan Peter Cayetano on Friday assured that the Philippines would raise the issue of reported Chinese developments in the South China Sea in an upcoming bilateral consultative meeting with China.

Cayetano said this when asked about the recent Asia Maritime Transparency Initiative report, which said China has completed or began working on about 72 acres, or 290,000 square meters in Spratlys and in the Paracels within 2017.

Cayetano said he is aware of reports about "certain activities" in the strategic waterway, but assured that the Department of National Defense and the Armed Forces of the Philippines are always on a close watch.

Cayetano guaranteed that on a bilateral level, this subject will be addressed, particularly during the China-Philippines bilateral consultative meeting expected to be held in the first quarter of 2018.

"If it's brought up in multilateral, 'di tayo aatras (we will not back off) from discussing it and coming up with a solution," he added.

He revealed that in old areas where claimants already constructed infrastructure in the past, countries are "still building."

"Sa (In) old areas, we monitored that a lot are still building sa kanilang hawak (where they have claims). Sa (In) Pagasa, we're repairing. Malaysia, Vietnam, China are repairing. But everyone is saying it's defensive," he said. "So that's where the Code of Conduct (COC) comes in."

He said not a part of Pagasa or any of its features has been lost since President Rodrigo Duterte became president.

"We lost a lot in the previous administration and administrations," he said. "Again, we're not blaming them, but we're trying to solve that problem."

AFP to use 2-pronged offensive in Mindanao

From the Philippine News Agency (Dec 17): AFP to use 2-pronged offensive in Mindanao

With a year-long extension of martial law in Mindanao, the Armed Forces of the Philippines (AFP) will be intensifying operations against the New People's Army and terrorist groups operating in the region.

The announcement was made by AFP chief-of-staff Gen. Rey Leonardo Guerrero in a briefing at Camp Aguinaldo, Quezon City on Friday, saying residents should expect military operations intensified in scope and coverage.

Guerrero said more patrols and checkpoints will be conducted in areas known to be infested with communist rebels to deter terrorist actions.

The agreements have greatly reduced kidnapping incidents as only 11 have been recorded this year compared to the 36 or 37 posted in 2016.

Senior defense and military officials of the Philippines and the People's Republic of China on Friday conducted talks to bolster the two nations’ bilateral defense cooperation.

The ADST is the bilateral dialogue mechanism between the Philippines and China, which was established under the purview of the 2004 Memorandum of Understanding (MOU) on Defense Cooperation.

Since 2005, four ADSTs have been alternately hosted by the two countries, with the last held in Beijing in 2013.

Andolong said the 5th ADST provided both sides the opportunity to exchange views on the current regional security situation and flesh out concrete plans to cooperate in addressing security concerns mutually faced by the Philippines and China.

Specifically, the discussions underscored defense cooperation in addressing non-traditional security challenges, such as terrorism and violent extremism, as well as man-made and natural disasters.

The Philippines and China also agreed to increase cooperation in the area of training and education, not only to share expertise and best practices, but also foster friendly relations between both peoples.

The talks also emphasized the importance of the West Philippine Sea (South China Sea) for the region’s economic growth and development.

Along this line, both sides expressed support for the peaceful settlement of disputes through lawful, non-coercive, and transparent means.

The Philippine side likewise expressed optimism that the adoption of the Framework for the Code of Conduct in the South China Sea (COC) last August has brought the two nations closer to the long-sought conclusion of a binding and meaningful COC.

In conclusion, both sides expressed confidence that with avenues for open and substantive dialogue, such as the ADST, the Philippines and China would be able to further cooperate and manage differences towards contributing to a peaceful, stable, and prosperous region.