.... Major Harold M Cabunoc, the Army Spokesperson, said that Major General Joel P Ibañez has assumed as Commander of the 5th Infantry Division located at Camp Melchor Dela Cruz in Upi, Gamu, Isabela....Ibañez, 53, was the former Commander of the Training and Doctrine Command, Philippine Army based in Capas, Tarlac. He once commanded the Army Reserve Command (ARESCOM), wherein he was instrumental in enhancing the training system of the POTC cadets, as well as the Army’s programs for the reservists. He also commanded the 1003rdBrigade in which led to the success of the Army's in Davao del Norte. As a young lieutenant, he saw combat actions in serving as Platoon Leader of Bravo Company and later on as Company Commander under the 5th Infantry Battalion, 1st Infantry Division. He also led the 74thInfantry Battalion, 2nd Infantry Division operating in . Ibañez is a proud member of the in . He hails from Talisay, Negros Occidental. He received numerous awards such as the Distinguished Service Star, Military Merit Medals and several campaign medals and ribbons. 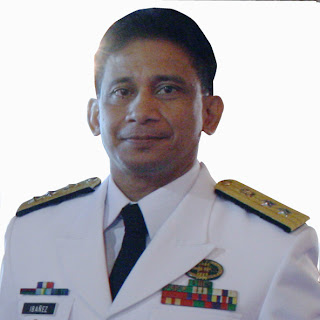 http://rangercabunzky.blogspot.com/2012/10/army-in-north-luzon-welcomes-new.html
Posted by Retired Analyst at 11:09 PM No comments:

The Philippines wants U.N. member countries to be more pro-active in insisting that the rule of law - not the force of arms - be the basis of resolving intensified Asian territorial disputes, including Manila's rift with Beijing, Foreign Secretary Albert del Rosario said Tuesday. In a speech before the U.N. General Assembly, an annual gathering of heads of state and top diplomats from 193 countries, Del Rosario said maritime disputes have recently intensified in Asia and there was an urgent need for all governments to comply with their international obligations to settle those rifts "without threats or use of force, under the UN Convention on the Law of the Seas,” or UNCLOS....

Email ThisBlogThis!Share to TwitterShare to FacebookShare to Pinterest
From InterAksyon (Oct 2): Army general is new chief of force provider for NOLCOM

Maj. Gen. Joel Ibanez on Tuesday assumed his post as the new commander of the Army’s 5th Infantry Division based at Camp Melchor Dela Cruz in Barangay Upi, Gamu, Isabela.... The 5th ID serves as the force provider of the Northern Luzon Command (NOLCOM) currently led by Lt. Gen. Anthony Alcantara. The area command is based at Camp Servillano Aquino in Tarlac City....

http://www.interaksyon.com/article/44549/army-general-is-new-chief-of-force-provider-for-nolcom
Posted by Retired Analyst at 10:31 PM No comments:

A group of suspected New People’s Army rebels burned three cargo trucks and a tractor owned by a sugar planter in Hacienda San Andres, Brgy. Andres Bonifacio, Cadiz City Sunday, after harassing a military outpost in the area.... Police investigations showed that such incidents usually occur during the milling season, and are aimed to remind or punish sugar planters, who fail to pay revolutionary taxes demanded from them by the NPA.

http://www.visayandailystar.com/2012/October/02/topstory9.htm
Posted by Retired Analyst at 10:27 PM No comments:

The medical first responder course is, the medic, a bridge between the injured Soldier on the ground to the hospital," said Master Sgt. Rodney Cowden, combat medic, 18th Medical Command (Deployment Support), U.S. Army Pacific. Cowden went on the say that the course consists of an overview of what medical first responding is, tactical combat casualty care, liter carries, maneuvers and trauma lanes. The event is held for the first time in Manila Philippines at the Philippine army Headquarters in Fort Andres Bonifacio Metro Manila. U.S. Army medical personnel teamed up with their Philippine counterparts to exchange information about U.S. Army medical training and instructing techniques, including applying bandages and tourniquets. The group then discussed and reviewed the current Philippine army medical program to develop a common standard for teaching medical techniques throughout the Philippine army....

....U.S. Army medical personnel teamed up with their Philippine counterparts to exchange information about U.S. Army medical training and instructing techniques, including applying bandages and tourniquets.

Posted by Retired Analyst at 5:51 PM No comments:

Email ThisBlogThis!Share to TwitterShare to FacebookShare to Pinterest
From the Philippine Star (Oct 1): 'No imminent threat against westerners'

The Armed Forces of the Philippines (AFP) today disputed the travel advisories issued by four countries last week, saying that its intelligence units did not detect an imminent threat against westerners. The United States, Britain, Canada and Australia have issued security alerts to their citizens in the Philippines, particularly in Metro Manila, citing an imminent security threat bared by the US Embassy in Manila, believed to remain until (October 10). "Our intelligence units did not monitor any imminent threat or any violent (activities) from a terrorist group or other groups," said AFP spokesman Col. Arnulfo Marcelo Burgos at a press briefing....

http://www.philstar.com/Article.aspx?articleId=854933&publicationSubCategoryId=200
Posted by Retired Analyst at 10:36 AM No comments:

Email ThisBlogThis!Share to TwitterShare to FacebookShare to Pinterest
From the Philippine Star (Oct 2): EU vows continued support to conflict-affected areas in

http://www.philstar.com/Article.aspx?articleId=855123&publicationSubCategoryId=200
Posted by Retired Analyst at 10:32 AM No comments:

Email ThisBlogThis!Share to TwitterShare to FacebookShare to Pinterest
From the Philippine Star (Oct 2): Charges vs Abus tagged in Zambo bus bombing dropped

The Department of Justice has dismissed for lack of evidence the charges filed against four Abu Sayyaf militants tagged in the bus bombing in this city last Aug. 16.  In an interview over a local television station over the weekend, city prosecutor Ricardo Cabaron said the testimonies of the witnesses did not establish that Hud Limaya, Maymay Limaya, a certain Toto and another unidentified suspect were behind the explosion.  The explosion that hit a Rural Transit bus along the Maria Clara Lobregat Highway in Barangay Guiwan left seven people dead, including the bus conductor....

http://www.philstar.com/nation/article.aspx?publicationSubCategoryId=67&articleId=854862
Posted by Retired Analyst at 10:29 AM No comments:

Three alleged members of a New People’s Army (NPA) unit operating in the hinterlands of Lake Sebu town in South Cotabato have surrendered to government forces following a series of negotiations. Lt. Col. Alexis Noel Bravo, commander of the 27th Infantry Battalion, said Monday the rebels decided to surrender mainly due to their “difficult situation in the mountains and uncertainty of their cause.” He identified the returnees as Lumbin Malon Lumbay, Adong Lumbay and certain Jimboy, who reportedly belonged to the NPA’s Guerrilla Front 73....

Email ThisBlogThis!Share to TwitterShare to FacebookShare to Pinterest
From MindaNews (Oct 1): NDFP says indemnity for Davao blast victims not stopgap

The National Democratic Front of the Philippines (NDFP) has denied that its indemnification order for the victims of the grenade blast in Paquibato District, Davao City last month was a “stopgap,” and argued that what they did was in “stark contrast to the denial of responsibility by the Armed Forces of the Philippines for the Hacienda Luisita massacre in November 2004.” Late last month, NDFP Southern Mindanao spokesperson Rubi del Mundo said they have issued the indemnification order after admitting that a New People’s Army (NPA) unit was responsible for the grenade blast in Barangay Fatima, Paquibato District last September 1....

Email ThisBlogThis!Share to TwitterShare to FacebookShare to Pinterest
From the Philippine Star (Oct 1): 9 NPA members surrender in S. Cotabato

Nine communist rebels surrendered to the military in South Cotabato in the last three months and have received livelihood assistance from the government. Lt. Col. Alexis Noel Bravo, commander of the Army’s 27th battalion, said the former rebels are now under their custody “With the localized social integration program of local government units, their basic needs are provided and their families are secured and supported,” Bravo said....

http://www.philstar.com/nation/article.aspx?publicationSubCategoryId=200&articleId=854824
Posted by Retired Analyst at 3:36 AM No comments:

Email ThisBlogThis!Share to TwitterShare to FacebookShare to Pinterest
From InterAksyon (Oct 1): AFP denies report that says it deployed 800 Marines to disputed territory near Palawan

The Armed Forces of the Philippines (AFP) on Monday denied a report that it deployed 800 Marines to Palawan, near the disputed Spratly Islands. Only less than 80 Marine personnel from the 3rd Marine Brigade, who arrived in Palawan last Friday, were deployed to the Western Command area, AFP spokesman Col. Arnulfo Burgos Jr. said. "There is no truth to the published reports that the recent deployment of 800 Philippine marines personnel in the area of the Western Command....

http://www.interaksyon.com/article/44472/afp-denies-report-that-says-it-deployed-800-marines-to-disputed-territory-near-palawan
Posted by Retired Analyst at 3:26 AM No comments:

Email ThisBlogThis!Share to TwitterShare to FacebookShare to Pinterest
From the Philippine Information Agency (Oct 1): Vigilance key in combating NPA extortion-Army

A military officer lauded the residents of Barangay Telafas, Columbio, Sultan Kudarat for their vigilance in alerting local authorities about the presence of rebels in the area that led to a 45-minute firefight which left two rebels dead and one member arrested, dawn of Saturday. Lt. Colonel Alexis Noel Bravo, commanding officer of the 27th Infantry Battalion said the timely information sent by the residents was enough for authorities to respond promptly....Bravo identified the captive as Renato Arema who was turned over immediately to the Columbio police for further investigation.....
http://www.pia.gov.ph/news/index.php?article=2381349055701
Posted by Retired Analyst at 3:19 AM No comments:

The rage against the new cybercrime law continues as three more government websites were defaced early Monday by hacker groups who strongly oppose the controversial measure. The websites of the National Telecommunications Commission (NTC), Food Development Center and Philippine Information Agency (PIA) were inaccessible on Monday morning as they were defaced by hackers "Private X" and "Anonymous Philippines." The websites were again operational as of this posting....

Email ThisBlogThis!Share to TwitterShare to FacebookShare to Pinterest
From the Mindanao Examiner (Oct 1): Sayyaf fighter killed, 2 others wounded in Philippine clash

...Capt. Albert Caber, a spokesman for the 1st Infantry Division, said the weekend fighting erupted in the village of Mebak in Sumisip town, a known stronghold of the al-Qaeda-linked rebel group.m“The fighting broke out in Mebak village where troops are operating against the Abu Sayyaf and we killed one of them – Mohammad Aliman - and wounded two others – Kirum Tampuri and Kursi Umangkat – and there were no military casualties,” he told the regional newspaper Mindanao Examiner....

Posted by Retired Analyst at 2:49 AM No comments: