From Rappler (Apr 6): Carlito Galvez Jr is next AFP chief

President Rodrigo Duterte has picked Lieutenant General Carlito Galvez Jr, who was among the generals on the ground during the Marawi siege, to lead the military 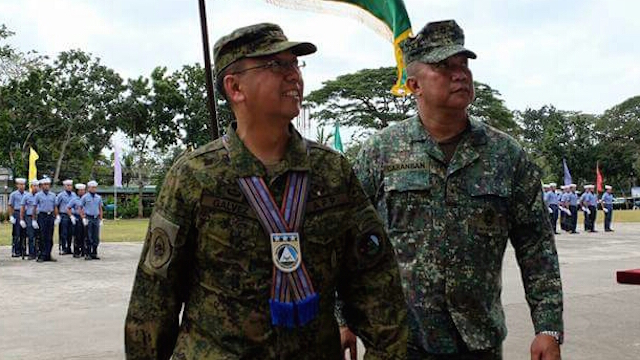 Presidential Spokesman Harry Roque told this to reporters during a sudden press briefing in the Palace grounds on Thursday evening.

Galvez will take the place of AFP chief General Rey Leonardo Guerrero, who is retiring on April 24, after Duterte extended his term by 4 months. Galvez is set to retire in December.

The 55-year-old officer brings to the post a rich combat and administrative experience dealing with threat groups in some conflict areas in the country, as the Duterte administration strives to implement a 4-year-old peace deal with the Moro Islamic Liberation Front.

As Westmincom chief, Galvez was among the generals on the ground during the Marawi siege.

He is a member of the Philippine Military Academy Class of 1985.

https://www.rappler.com/nation/199642-carlito-galvez-jr-armed-forces-philippines-chief
Posted by Retired Analyst at 9:16 AM No comments: 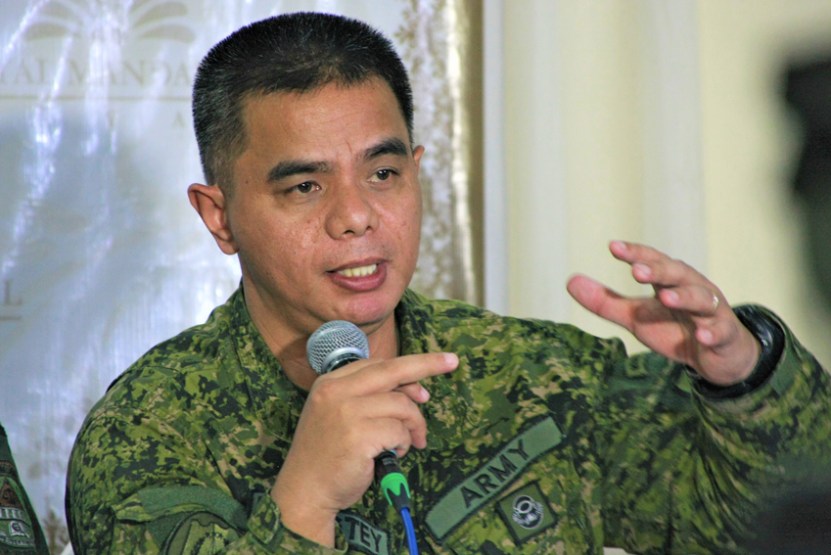 The Armed Forces of the Philippines-Eastern Mindanao Command urged businessmen to coordinate with the military and other local authorities after the recent reported burning of heavy equipment allegedly by the New People’s Army (NPA) in three areas in Davao City.

AFP-EMCs public information officer Major Ezra Balagtey, in a press conference on Wednesday, said they are trying to develop the Investment Protection and Security Operation Mechanism (IPSOM) to protect construction companies in the region.
On March 31, suspected NPA fighters burned down one bulldozer and a backhoe in Sitio Sta. Maria in Barangay Fatima, Paquibato District; four dump trucks and one backhoe owned by the Leonard Trucking Services in Purok 4, Sitio Saudan and Purok 14, Sitio Quarry in Barangay Callawa, Buhangin District; and one backhoe in Purok 8, Barangay Dalagdag in Calinan District.

Balagtey said that under the IPSOM, AFP units will coordinate with construction firms for any threats in their respective construction areas.
Gains in peace talks

For its part, Presidential Adviser on the Peace Process Jesus Dureza last Monday lashed at the NPA for the senseless destruction of heavy equipment in Davao City.

“The act unnecessarily squanders whatever gains we have been quietly getting lately in our common effort with the rebels to return to the negotiating table,” said Dureza.

In response, National Democratic Front of the Philippines chief peace negotiator Fidel Agcaoili said Dureza should direct any complaints through the proper channels instead of using these as a scapegoat for difficulties in resuming stalled negotiations.

Agcaoli refuted Dureza saying “what about, the continuing killings of NPA fighters, even those unarmed and undergoing medical treatment the continuing arrests, detention, threats and harassment of open legal activists and even UN rapporteurs, and the terror attacks against communities, occupation of schools and public places like health centers that have led to forcible displacements of tens of thousands of residents?

NDFP also said the Joint Monitoring Committee under the CARHRIHL (Comprehensive Agreement on Respect for Human Rights and International Humanitarian Law) can address complaints raised by the Philippine government against the NPA.

Meanwhile, in his privileged speech during the City Council’s regular session on Tuesday, Councilor Danilo Dayanghirang challenged the NDFP to review its “strategy and methodology” in advancing their struggle.

Dayanghirang said “I hope the leadership of the NDFP and the NPA will review its methodology, its strategy to advance what they are fighting for. We have the same purpose and that is to elevate and emancipate the life of Filipino people from poverty.”

He proposed that instead of destroying properties, the NDFP should allow progress and parallel to that is to participate in the electoral process.

NDFP’s Fidel Agcaoili clarified that the NPA unit operating in the area has not yet issued any statement regarding the incident.

Agcaoili urged the councilor to “look deeper” in the situation of exploited Filipinos and why they joined the armed revolution.

“The semifeudal and semi-colonial social system has been with us for more than a century. Our people have suffered so much despite the good intentions of well-meaning people to institute reforms. yet the ruling classes of big landlords, compradors and corrupt high government officials have refused to heed the peoples demand for change. So the people have no other recourse but rely on their own efforts to bring about radical social change in the country,” said Agcaoili.

He maintained that the stalled peace talks between the government and the NDFP is supposed to address the roots of the armed conflict in the country.

“Precisely, the peace negotiations,” Agcaoili added, “are meant to address the roots of the armed conflict, forge agreements that would bring about basic social, economic and political reforms, and lay the foundation for a just and lasting peace in the country.”

http://davaotoday.com/main/politics/afp-plans-biz-protection-oplan-vs-npa-offensives/
Posted by Retired Analyst at 9:10 AM No comments:

Año tells communists: You cannot demand peace, yet do violence

From the Manila Bulletin (Apr 5): Año tells communists: You cannot demand peace, yet do violence

In the wake of the Holy Week attacks allegedly perpetuated by communist rebels in Davao City, Department of the Interior and Local Government (DILG) officer-in-charge (OIC) Eduardo M. Año asked them to show genuine sincerity if they want to pursue the peace talks with the government.

Gen. Eduardo Año (AP Photo/Bullit Marquez, File / MANILA BULLETIN)
He also demanded that the rebel groups should stop all forms of hostilities, extortion activities and burning of construction or farm equipment and instead build mutual trust with the government to achieve genuine peace.

“You cannot demand peace yet do violence. Peace negotiations require an enabling environment for your side and the government panel to hear out each other and arrive at sincere agreements,” Año said.

He insisted that there is no use talking peace if government forces and civilians are dying with the rebel groups continuing to commit lawlessness.

Such move by the rebel forces according to Ano is contrary to getting back to the peace table since talking peace needs confidence-building measures.

The DILG Chief urged the NDF-CPP-NPA (National Democratic Front – Communist Party of the Philippines – New People’s Army) “to reciprocate the sincerity of the government and others concerned such as the Royal Norwegian Government and at least 60 members of the House of Representatives both calling for President Duterte to revive peace talks.”

Nonetheless, Ano assured that with or without peace talks, the Duterte administration welcomes with open arms all rebels who will lay down their arms and return to mainstream society.

He added that “among the proof of the government’s sincerity is the DILG’s Enhanced-Comprehensive Local Integration Program (E-CLIP).”

The E-CLIP facilitates the mainstreaming of former NPA rebels and Militia ng Bayan as productive citizens. The program also compensates and remunerates all turned-in firearms.

For the past three years, the DILG has provided financial assistance to hundreds of former communist rebels. P59.68-million has been utilized for immediate assistance to 471 former rebels, while 459 got livelihood assistance, 361 with reintegration assistance, and 132 were given firearm renumeration.

A halfway house is a temporary residence that serves as the processing center for former rebels. It could be a new structure that is established in provinces or highly urbanized cities that have expressed the need for such facility.

Just recently the President approved the release of almost half a billion pesos to support the E-CLIP, enough to support the more than 1,000 expected surrenderees for 2018.

“We call on the families, relatives and friends of rebels to help us convince them to go down from the mountains and take this life-changing opportunity,” he noted.

As for the police and soldiers, the DILG manages the KIA/WIA (Killed-in-Action/Wounded-in-Action) One Stop Assistance Program Management that oversees the delivery of harmonized and streamlined government packages for the beneficiaries of battle or duty casualties of the Philippine National Police and the AFP.

https://news.mb.com.ph/2018/04/05/ano-tells-communistsyou-cannot-demand-peace-yet-do-violence/
Posted by Retired Analyst at 9:05 AM No comments: