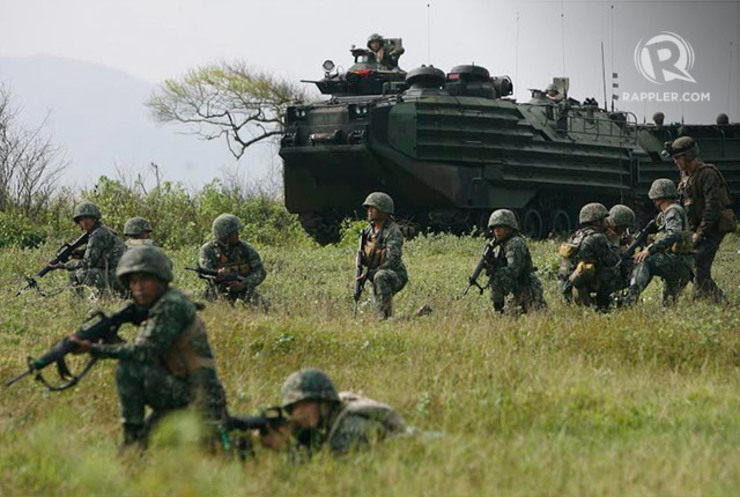 JOINT EXERCISE. Filipino troops position themselves near a marine amphibious assault vehicle manned by their US counterparts during a mechanized assault exercise as part of the 2014 Amphibious Landing Exercise (PHIBLEX) at the Naval Education and Training Command (NETC) in Zambales on Sunday. Around 1,000 Filipino and 3,000 US marines and sailors will join the annual joint military exercise that will last for 12 days. Photo by Ben Nabong/Rappler
ZAMBALES, Philippines - Over 6,000 Philippine and United States marines carried out a military exercise on a Philippine beach Sunday, October 5, near a disputed reef occupied by Chinese ships which has become a potential regional flashpoint.

The American and Filipino troops, aboard 5 US amphibious, armoured assault vehicles landed on the deserted beach facing the South China Sea in the latest in a series of combat exercises that began on September 29.

With the USS Germantown amphibious dock landing ship overseeing events from the sea, the Filipino and American troops rushed from their vehicles and took up combat positions.

"The US has always been a good ally of the Filipinos and if they need our assistance, we will be here for them and we think this exercise really reinforces that," said Lieutenant Colonel Robert Rice, an officer of the US training staff.

However he declined to link the exercise to China's growing restiveness in the region, saying such talk was "speculation."

His Filipino counterpart, Lieutenant Colonel Dennis Hernandez said the exercises were intended to boost the capabilities of a marine amphibious brigade, based in the island of Palawan, the closest outpost to the South China Sea.

The exercise took place near a naval outpost on Zambales on Luzon island, 220 kilometers (137 miles) east of the disputed Scarborough Shoal on the South China Sea.

The shoal, a traditionally-rich fishing ground, has been effectively taken over by China following a tense year-long standoff with the Philippines in 2012.

China claims nearly all of the South China Sea, including waters near its smaller neighbors' shores.

It has been accused of becoming increasingly aggressive in staking its claims to the sea, a vital shipping lane also believed to contain vast oil and mineral deposits.

Parts are also claimed by Brunei, Malaysia, Vietnam and Taiwan.

The poorly-armed Philippines has increasingly looked at the United States to boost its military capabilities amid the Chinese threat.

In April, the allies signed a defence pact that would see thousands of US troops stationed in the country in the next decade.

http://www.rappler.com/nation/71146-philippines-united-states-marines-exercises-near-scarborough-shoal
Posted by Retired Analyst at 1:27 PM No comments:

Coming up: PH, US meeting on EDCA details

From Rappler (Oct 6): Coming up: PH, US meeting on EDCA details

Armed Forces chief of staff General Gregorio Catapang Jr stressed the "importance" of the swift implementation of the ' expanded military deal with the as he is scheduled to discuss its details next week with the chief of the US Pacific Command.


("If they don't want it [military deal], they should decide. If they want it, they should also decide so that our security posture doesn't hang in the balance. The signed agreement with our American counterparts is very important.")


US Pacific Command chief Admiral Samuel Locklear III will meet with Catapang next week, October 13-14. Military spokesperson Lieutenant Colonel Harold Cabunoc said they will meet at the military headquarters in for the regular Mutual Defense Board-Security Engagement Board (MDB-SEB) meeting.


The has long sought the help of the military as the maritime tension with over the () continues to escalate. The Enhanced Defense Cooperation Agreement was signed in April but petitions were immediately filed against it on grounds that, among other arguments, it was not ratified by the Senate. (READ: Declare EDCA unconstitutional, SC asked)


The High Court is not likely to take it up in time for the meeting however, according to a source in the Supreme Court who refused to be named because he is not authorized to speak about it. "Chances are it will be taken up towards the end of the year," the source said.


The regular MDB-SEB typically discusses trainings between the two militaries like Balikatan and PHIBLEX. While the EDCA implementation was put on hold, Catapang said they should discuss the details so it can be implemented immediately should the SC give it the go-signal.


"Where do they want to preposition their humanitarian equipment? And what are the areas that can developed for the prepositioning?," Catapang said.


"The planning should be continuous so it can be executed immediately... If it's a go, we already have plans. If it's a no go, we will keep it in the filing cabinet," said Catapang.


EDCA expands existing cooperation activities between the and the to increase the presence of American troops in the and to include two new activities. The military can build military facilities and preposition defense assets in “agreed locations” that have yet to be determined by the two countries.


Under the agreement, these details will be decided by Catapang and Locklear as co-chairs of the Mutual Defense Board.


The earlier announced plans to offer the Oyster Bay naval outpost in Palawan and the Naval Education and Training Command in Zambales, both facing the .

http://www.rappler.com/nation/71175-mdb-seb-meeting-edca
Posted by Retired Analyst at 1:24 PM No comments:


"The chief of staff of the Armed Forces of the Philippines (AFP) has directed different units to compose K9 tracking units in order to help locate the Abu Sayyaf bandits who are believed to be holding the German hostages. The intent is to put pressure on them, possibly leading to the release or rescue of the hostages in the pressure," Cabunoc told reporters on Monday, October 6.


The two German hostages were interviewed over the radio last week to air their appeal to authorities. The Abu Sayyaf threatened to kill one of them unless a P250-million ($5.62-million, 4.4-million euro) ransom is paid.


The terrorist group also wants to stop aiding the in the fight against the Islamic State group in and , which the Abu Sayyaf has pledged allegiance to. (READ: Abu Sayyaf's German hostages air appeal to authorities)


The Philippine military earlier dispatched an estimated 1,000-plus extra soldiers to Sulu. Together with the tracker dogs, the military aims to put pressure on the Abu Sayyaf, who are believed to be freely moving around the province, and contain them in a smaller area, Cabunoc said.


The tracker dogs will help the troops make sure their movements are accurate, he said.


"The chief of staff has ensured that the primary concern of the AFP is to make these actions as safe as possible for the hostages," Cabunoc added.


He cited an instance in 2000 when military pressure on the Abu Sayyaf forced them to release members of the Jesus Miracle Crusade without a firefight.


The military operation is also meant to rescue the other hostages, according to Cabunoc.


Cabunoc said the military will also continue to work with the local crisis management committee to secure the release of the hostages.

http://www.rappler.com/nation/71198-military-tracking-dogs-sulu-terrorists
Posted by Retired Analyst at 1:14 PM No comments:

KOTA KINABALU: The two Malaysians held by the Abu Sayyaf militant group in the southern Philippines are still “safe” for now.

“The victims are safe. We are waiting for the final negotiations between the kidnappers and authorities from Malaysia and the Philippines. We hope to have something positive after that,” he said, after attending prayers at the Kepayan state police headquarters mosque to mark Hari Raya Haji here.

Zakiah was abducted by Filipino gunmen from the Mabul Water Bungalows Resort in Semporna on July 12, while Chan was snatched from his fish farm in Kunak on June 16.
Comm Jalaluddin said they were working towards securing the freedom of both Malaysians who were being held by two separate groups in the southern Philippines island of Jolo.

It is learned that the gunmen are demanding up to RM5mil for Zakiah’s release and RM3mil for Chan’s freedom. However, the high price made directly or through mediators have stalled talks for their freedom.

Philippines military have earlier last week beefed up their operations in Jolo in efforts to rescue a German couple after the terror group threatened to behead them.

The spokesman, who identified himself as Abu Rame, threatened to behead one of Germans on Oct 17, if their demands were not met.

On the robbery and murder of primary school teacher Masinah Samadi, 50, at her house in Kundasang, Comm Jalaluddin said police believed that the intruder was known to the victim.

“We suspect the intruder killed her as she could identify him. We are still investigating,” he added.

On police investigations into the Sabah Sarawak Keluar Malaysia (SSKM) Facebook page, he said they could not reveal details of their investigations.

http://www.thestar.com.my/News/Nation/2014/10/06/Malaysian-hostages-held-by-Abu-Sayyaf-safe-for-now-say-cops/
Posted by Retired Analyst at 1:07 PM No comments:

The Philippine government may have stopped rehabilitation of the airstrip in Pagasa Island but this does not mean that the country has abandoned the disputed area.

Speaking to reporters, Armed Forces spokesman Lt. Col. Harold Cabunoc said the halt in planned improvements on a military airstrip in the disputed South China Sea will have no effect on supply runs to the island.

"Practically, there is no effect. As of now, we can continue our resupply operations, the logistics run, including the transport of troops for rotation," Cabunoc said.

A spokeswoman of President Aquino said the government had suspended long-planned upgrade work on a military runway in the disputed Spratly islands to boost chances of a favorable ruling at the UN against Beijing over the tense territorial row.

"We wanted to maintain the moral high ground in light of the case we filed at the (UN) arbitration tribunal regarding the West Philippine Sea," Deputy Presidential Spokeswoman Abigail Valte said, using the Filipino name for the area.

"We chose...to ease tensions and avoid any incident that may be construed as ramping up tensions or trying to provoke any of the claimant countries," Valte said over government radio on Saturday.

Pagasa is one of 9 areas in the disputed Spratly Islands occupied by Filipino troops. Hundreds of civilians are living on Pagasa Island which serves as the seat of government of Palawan’s Kalayaan town.

The runway is used mainly by military aircraft to resupply the Filipino troops guarding the island and nearby rocks, as well as a small community of Filipino civilians living on Pagasa.

The upgrade plans were suspended by Aquino "sometime in the middle of 2014," Valte said.
The airstrip project, as well as acquisitions of Navy vessels, were part of Aquino's efforts to upgrade the capability of the Philippine military, one of the most poorly equipped in the region.

China has refused to take part in UN arbitration with the Philippines, and warned Manila that bilateral ties will suffer.

The two countries have been involved in several tense confrontations in the South China Sea in recent months.

Department of National Defense spokesman Peter Paul Galvez said the decision was also meant to ease the tension in the region, even as China continue to reclaim its occupied reefs which may be turned into military bases.
http://www.abs-cbnnews.com/nation/10/06/14/ph-wont-abandon-pagasa-island
Posted by Retired Analyst at 1:03 PM No comments: