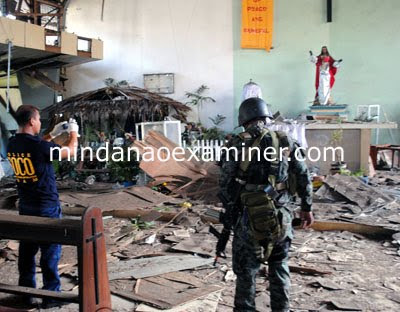 A grenade attack on a Catholic Church late Wednesday has injured 2 civilians in the southern Philippine town of Jolo, officials said.

The town’s mayor Hussin Amin said the grenade exploded outside the church, but no individual or group has claimed responsibility for the attack.

He said the blast wounded Salma Pacana, 19, and Romano Sahiduan, 25, who were just passing the area when the explosion occurred.

“They were slightly wounded in the blast and we condemned this attack and those behind it. Jolo is now peaceful and people are enjoying the tranquillity and peace environment and now this,” Amin told the regional newspaper Mindanao Examiner by phone.

He appealed to citizens to stay calm and vigilant and report to authorities any suspicious persons in their community. “We don’t want to be disturbed by this kind of incident and this is isolated and nothing to worry,” he said.

“We condemn the bombing as we also pray for the victims. We join with our brethren in Jolo particularly to the Cathedral of Mount Carmel. As we do, we should not only focus on blaming Abu Sayyaf or any other groups specially that of our Moro brethren but we should also try to analyze the current political and military and economic positioning of the United States of America,” he said.

“The timing of the spate of bombings in the Philippines and the very recent past has been observed to be when the US Embassies in some parts of the world are closed as there is supposed to be threat all over but most of all against the US,” he added.

He said the timing of the bombings came at a crucial time when the U.S. and the Philippines are talking about additional number of Americans troops to be deployed in our country with both governments saying that U.S. troops can help maintain peace in the Philippines.

“They forget that it is in violation to our national sovereignty and is a violation of the Visiting Forces Agreement. We call on our people to be rational and to be truly nationalist and not allow America to trample upon us by mocking at our very face that we cannot do it that's why they needed to be here. After all, we should suspect that this might then again be orchestrated just like the result of the MIndanao Truth Commission investigating the spate of bombings in Mindanao which was supported by the junior officers of the AFP that resulted to the Oakwood mutiny,” the bishop said.

Last year, a grenade was also lobbed at the same church, the Mount Carmel Cathedral. The grenade landed on the church’s roof where it exploded.

Previous attacks on the church were largely blamed by the authorities to the Abu Sayyaf, a small but the most notorious among rebel groups operating in the southern Philippines.

In December 2010, Abu Sayyaf rebels bombed another Catholic Church inside a police compound in Jolo town and killing at least 6 people.

Rebels scaled the church wall undetected under cover of darkness and planted the bomb and waited the next morning before detonating the powerful explosive during a mass.

Two people were also killed and 17 others wounded when Abu Sayyaf rebels also detonated a huge bomb planted outside the Mount Carmel Cathedral in July 2009. A second bomb was found near the church and had been disarmed by Filipino and US troops stationed in Jolo.

The powerful blast damaged a row of stores outside the church. 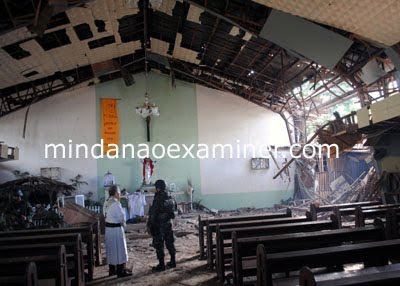 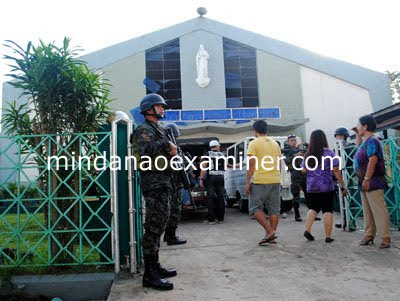 The aftermath of August 2012 Abu Sayyaf bombing of a Catholic church in Jolo town in the southern Philippines. (Mindanao Examiner Photo - Nickee Butlangan)

Letter to the Editor: No to US Drone Warfare in Mindanao and Elsewhere! US Troops Out Now!

Posted to the Mindanao Examiner blog site (Aug 15): Letter to the Editor: No to US Drone Warfare in Mindanao and Elsewhere! US Troops Out Now!

WE WELCOME the pronouncement of Mayor Rodrigo Duterte of not allowing Davao City to be used as a launching pad for US military unmanned aerial vehicles or drones nor for the basing of so-called ‘permanently rotational’ military troops. UAVs, commonly called drones, are the latest military equipment-robots boasted by the for giving it superior advantage in warfare over its enemies. This has given rise to ‘drone warfare’ as a component in its ‘war on terror.’ But what American President Barack Obama portrays as its prized war materiel possession, the realities in the battlefield and in communities betrays as its loss. Robots do not have discernment, a fundamental flaw in war and in any other human activity. Thus, this drone warfare has killed so many civilians, most of them women and children. In countries where drone warfare has been relied upon by the as its most effective weapon to track down terrorists, it is the which has gained notoriety as the world’s No. 1 Terrorist. Aside from clearly being an issue of human rights, the US-led war of terror against the peoples of the world is an aggression against the sovereignty of nations. Drone surveillances and attacks are particularly directed at countries where the has strategic economic and political interests, and where there is armed resistance. We repudiate the US-led war of terror. Mayor Duterte correctly points out that it is the which is capable of sowing terror, the way CIA agent Michael Terrence Meiring was exposed to be in possession of high-powered explosives. The bombs he was carrying self-detonated at Evergreen Hotel in in 2002, the year preceding the deadly airport and wharf bombings. Those bombings were then exposed by junior military officers to be the handiwork of top officials of the Armed Forces of the . The bombing and bomb scare situation in Mindanao, as in the string of terror in the past, show a pattern of scenario-building in order to justify military aid and intervention. It does not escape scrutiny that while was rocked by bombings, Malacanang was shamelessly asking for an increase in the number of US military rotational forces in the country, aside from justifying the continuing US-Philippine joint military exercises.

That Mayor Duterte was approached by the to use the old airport as a military base, starting with its drone program, speaks of a military design in Mindanao as part of the pivot to . It also exposes President Aquino’s backdoor compromises and sell out of the national sovereignty by expanding the coverage of the Visiting Forces Agreement and optimizing the master-and-lackey relationship between the and the under the US-RP Mutual Defense Treaty. We say No to US Drones in , and in the world! Junk VFA and MDT! InPeace Mindanao Initiatives for Peace in Mindanao Rm. 101 Kalinaw Center for Interfaith Resources 13 Francisco Avenue, Juna Subdivision, Matina, 8000, Davao City Philippines telefax: +63.82.299.4964 email: inpeace.info@yahoo.com web: www.kalinaw.com.ph facebook: inpeacemindanao

http://mindanaoexaminer.blogspot.com/2013/08/letter-to-editor-no-to-us-drone-warfare.html
Posted by Retired Analyst at 2:40 AM 2 comments:

'We are not behind Mindanao bombings’ - BIFF

From the Mindanao Examiner blog site (Aug 15): 'We are not behind Mindanao bombings’ - BIFF 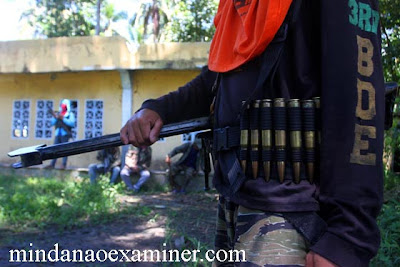 A Muslim rebel group fighting for independence in the southern Philippines has strongly denied involvements in the spate of deadly bombings that had killed and wounded dozens of innocent civilians in the restive region.

“This spate of bombings is not ours. We are fighting for the cause and freedom of the Bangsamoro people,” Abu Misry Mama, a spokesman for the Bangsamoro Islamic Freedom Movement, said in a clandestine interview with the regional newspaper Mindanao Examiner in the southern Philippines.

He said they are fighting for a jihad and has nothing to do with terror groups being linked by authorities to his group and its army of freedom fighters.

“We do not target innocent civilians, especially women and children. This is not the teachings of the holy Koran,” Mama said, although he admitted responsibility for the roadside bombing of a military truck in Maguindanao province just recently.

Authorities have linked the rebel group to the Indonesian Jemaah Islamiya and al-Qaeda, including a rag-tag army of militants fighting for the Islamization of Mindanao. The military said Mama’s group is coddling Malaysian bomber Zulkifli bin Hir, tagged as aming those who was behind the 2002 Bali bombings.

Mama denied reports linking his group to the bombings in Cagayan de Oro City and Cotabato City and others areas in central Mindanao.  He said the military and police authorities should shed light on how these bombs managed to pass through tight security checkpoints.

Security forces continue to hunt down Mama’s group, blamed by the army for the string of ambuscades on military in the South.

“The BIFF is behind many atrocities and bombings and the operation is going on to neutralize this group and so are other lawless groups behind similar attacks,” Col. Dickson Hermoso, a spokesman for the 6th Infantry Division, said in a separate interview.

Kato had led rebel forces in attacking civilian targets after peace negotiators failed to sign a Muslim homeland in 2008. The Supreme Court declared the accord unconstitutional. 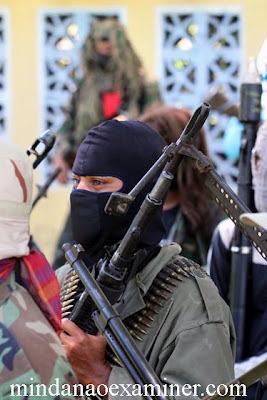 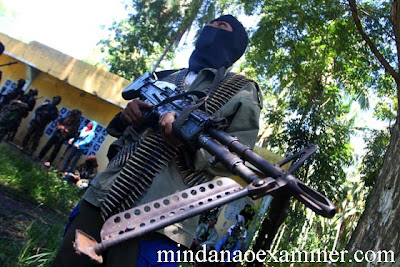 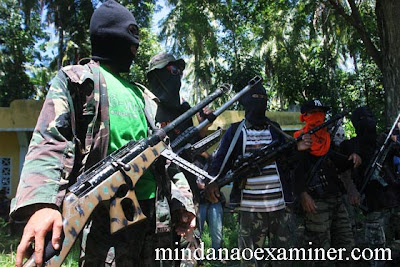 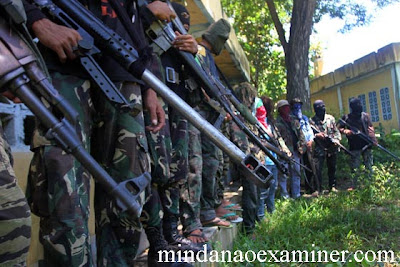 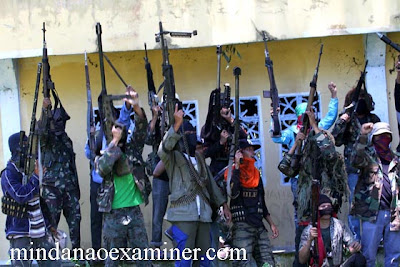 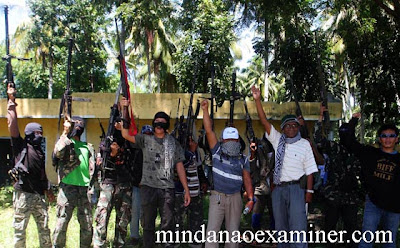 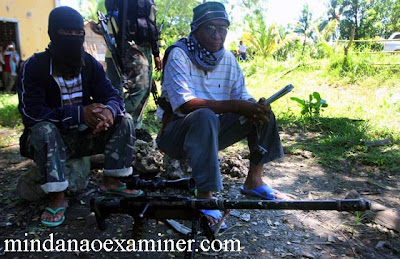 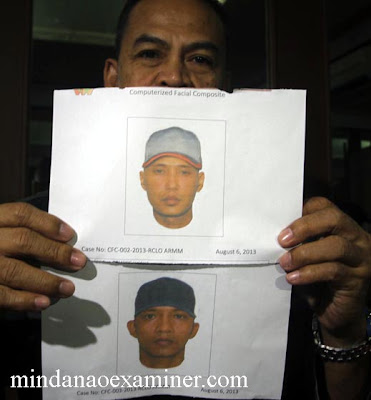 Exclusive photographs of rebel spokesman Abu Misry Mama and members of the Bangsamoro Islamic Freedom Movement during a clandestine interview by the Mindanao Examiner Regional Newspaper in southern Philippines. The rebel group has denied involvements in the spate of deadly bombings in the restive region. And Cotabato City police chief, Senior Superintendent Rolen Balquin, shows a facial composite of two suspected bombers. (Photos by Mark Navales)

http://mindanaoexaminer.blogspot.com/2013/08/we-are-not-behind-mindanao-bombings-biff.html
Posted by Retired Analyst at 2:34 AM No comments: