There is an increasing chance now, more than ever, that the Moros in Mindanao will get a better deal with the Manila government. Signs are great that the Aquino administration --- and even those not in the party in power --- are more open to finally settle this conflict in Mindanao.... What is this deal that is deemed better than any deal the Moros got in the past? In essence, this deal is about redefining the relationship between the Philippine state and the Bangsamoro in Mindanao through power-sharing and wealth-sharing.... It is time for every Moro, irrespective of group affiliations, to show selflessness by supporting this negotiation. Even a mere endorsement is a great boost to this undertaking. This is the best time for the current Moro leaders, in and outside of government, to do a “Mandela” for our people....

http://www.luwaran.com/home/index.php?option=com_content&view=article&id=2864:time-to-show-selflessness&catid=344:gggg
Posted by Retired Analyst at 8:24 PM No comments:

Effective implementation with the public’s support is key to the success of the southern peace talks beyond the signing of any agreement, an official said at the weekend. "Implementation is where the real hard and complicated work begins in achieving peace in Mindanao," Presidential Adviser on the Peace Process Teresita Q. Deles said in a statement, days before the government and Moro negotiators meet tomorrow in Kuala Lumpur for further talks.

http://www.bworldonline.com/content.php?section=Nation&title=Implementation-key-to-peace-deal:-gov’t&id=59309
Posted by Retired Analyst at 10:48 AM No comments:

The 9th Infantry Division have included events that depict the soldier’s non-traditional role in society in the conduct of its annual Squad and Team Challenge from September 25 – 28, 2013 at the grounds of Camp Elias Angeles. In this year’s Squad and Team Challenge, the participants were evaluated on Casualty Evacuation Operations, Disaster Response Operations, and Civil Military Operations. M.Gen Romeo V Calizo, Commander of the 9th Infantry Division said the soldiers need to adapt to the changing environment and situation.

http://www.journal.com.ph/index.php/news/provincial/38888-soldiers-non-combatant-role-cited
Posted by Retired Analyst at 10:33 AM No comments:

The Philippine Army based in said it will support all peace and development initiatives of the government and other cause-oriented groups as part of the AFP’s Internal Peace and Security Plan “Bayanihan.” ,Maj. Gen. Gerardo Layug, commanding general of the 8th Infantry Division, said the Army is supporting the Payapa sa Masaganang Pamayanan (PAMANA) Road Project from Mondragon to Silvino Lubos, .

http://leytesamardaily.net/2012/09/military-support-govts-peace-devt-initiatives/
Posted by Retired Analyst at 10:28 AM No comments:

Email ThisBlogThis!Share to TwitterShare to FacebookShare to Pinterest
From Malaya (Oct 1): China ups construction in Spratlys

A TOP Armed Forces official yesterday said the military has observed improvements in Chinese structures in the disputed Spratly Islands, a chain of islands and islets in the West Philippine Sea or South China Sea. “Every time we take periodic pictures of all the islands in the Spratlys, we notice some changes, we observe changes in structures,” said Lt. Gen. Juancho Sabban, commander of the military’s Western Command.

Email ThisBlogThis!Share to TwitterShare to FacebookShare to Pinterest
From Malaya (Oct 1): 12 AFP officers get new posts

Muslim leaders in the south yesterday hailed the United Kingdom’s (UK) renewed commitment of support for the current peace process taking place in Mindanao, saying there would be “no reason” for tranquility and meaningful development to take place in the region with the pooled backing of local and international institutions.

http://www.mb.com.ph/articles/375421/uk-s-peace-talks-support-hailed
Posted by Retired Analyst at 10:08 AM No comments:

THE government on Sunday said it considered the security threat against Western nations here as “benign,” even as intelligence forces continued to be on the lookout for Abu Sayyaf terrorists in Metro Manila to preempt them just in case. National Security Adviser Cesar Garcia said the United States Embassy in Manila had already provided information on the basis of its “emergency” security alert to its citizens on Friday, but did not provide details on the nature of that threat. The embassy said the threat alert would remain in effect until Oct. 10. “We are asking for more details because what they gave us was generic,” Garcia said in a phone interview on Sunday.

http://manilastandardtoday.com/2012/10/01/govt-downplays-terror-threats-in-metro-manila/
Posted by Retired Analyst at 10:00 AM No comments:

THE government on Sunday ordered the 3rd Marine Brigade to join a task force defending the country’s sovereignty on the Spratly Islands, which are also being claimed by China, Vietnam, Brunei, Malaysia and Taiwan. Western Command chief Lt. Gen. Juancho Sabban said he had issued a directive creating the Joint Task Force on the Kalayaan Island Group, which is within the hotly contested Spratly archipelago. Sabban said the 3rd Brigade will act as the command and control group of two Marine battalions stationed in Palawan, and will be responsible for the defense of the islands that are believed to be home to vast mineral deposits and a potential flashpoint for conflict in the region. He said the Marines would not be stationed on the islands but patrol the disputed area. He said the task force would be headed by Col. Andre Costales Jr.

http://manilastandardtoday.com/2012/10/01/ph-sends-more-troops-to-kalayaan-islands/
Posted by Retired Analyst at 9:57 AM No comments:

The 8th Infantry (Stormtroopers) Division, Philippine Army joins the Office of Presidential Adviser on Peace Process (OPPAP) in inaugurating P30M road project from Brgy Nenita, Mondragon, Northern Samar, yesterday September 19, 2012. The Payapa sa Masaganang Pamayanan (PAMANA) Road Project from Mondragon to Silvino Lubos, Northern Samar is part of the Pillar 3 Program which is intended for priority road networks in the Province. Other PAMANA Areas in the Province of Northern Samar covers three municipalities namely: Las Navas, San Roque and Silvino Lubos, and by 2013, Pillar 2 Program which is KALAHI-CIDDS Program will be covering the Municipality of Lope De Vega.... Email ThisBlogThis!Share to TwitterShare to FacebookShare to Pinterest
Posted to the Samar News (Sep 21):  PNP SCOUT to beef up campaign against local terrorist movement in Eastern Visayas

.... A total of 195 police personnel have officially completed the PNP Special Counter Insurgency Unit Training (PNP SCOUT) under the SCOUT Class 17-2012 while 187 others will start training under the SCOUT Class 18-2012 to be held at the Regional Special Training Unit 8 (RSTU8). The PNP SCOUT is a rigid 45-day training designed to equip police officers with the requisite skills and confidence that will give them a distinct advantage in counter-insurgency and local terrorism operation. The training puts premium on combat skills development, jungle fighting and survival techniques and also teaches the participants the principles and techniques of urban crisis response operations primarily on search and rescue (SAR), and police intervention preparedness....

“We blame the US government for its campaign against terrorism that deliberately tags Muslims as terrorists,” Bai Ali Indayla, spokesperson of Moro human rights group Kawagib told davaotoday.com. Indayla’s statement came after the controversial 14-minute low-budget film, Innocence of Muslims, stirred the Muslim community worldwide. In a protest last week in Cotabato City, hundreds condemned what they call a “US design” to demonize anew Muslims as terrorists via the said film. In the past weeks, hundreds also burned US and Israeli flags in Marawi town, Lanao del Sur while many have protested before the American embassy in Manila.

Email ThisBlogThis!Share to TwitterShare to FacebookShare to Pinterest
From the Bohol Standard (Sep 30):  Lifting Bohol out of poverty list, Gov. Rico’s defining moment

Rep. Erico B. Aumentado bared that his winning moments as governor for 9 years were “moving out Bohol from Club 20, the 20 poorest provinces of the Philippines, and ending the over four decades of communist insurgency therein”....  In the anti- insurgency front, Col. Allan Luga, then 802nd Brigade commander, declared that the 4 communist fronts in Bohol were being dismantled in 2009. Consequently, Maj. Gen. Arthur Tabaquero, 8th Infantry Division commanding general, and P/Chief Supt. Lani-O Nerez, PNP Central Visayas commander, with then Defense Sec. Norberto Gonzales officially declared Bohol as insurgency free on February 11, 2010 during the inauguration of the rebel returnees’ Bayanihan Center, a joint project of the provincial government, the Presidential Management Staff and OPAPP in Remedios, Danao.

http://www.theboholstandard.com/topstory.php
Posted by Retired Analyst at 9:12 AM No comments:

Email ThisBlogThis!Share to TwitterShare to FacebookShare to Pinterest
From the Stars & Stripes (Sep 28): US provides advanced surveillance capabilities to track down terrorists

Because the Philippine constitution bans U.S. troops from direct combat, the Joint Special Operations Task Force-Philippines plays mostly an advisory and training role in the battle against transnational terrorist groups. But perhaps the most important U.S. military contribution has been advanced surveillance capabilities to track down terrorists in dense, remote jungle. The high-tech equipment remains under U.S. control, according to Col. Mark Miller, the JSOTF-P commander.

http://www.stripes.com/news/us-provides-advanced-surveillance-capabilities-to-track-down-terrorists-1.191133
Posted by Retired Analyst at 9:03 AM No comments:


Sa ulat na inilabas ng Stars and Stripes na may pamagat na “US provides advanced surveillance capabilities to track down terrorists,” ay sinabi ni Col. Mark Miller, ang commander ng Joint Special Operations Task Force-Philippines (JSOTFP), na “when the Armed Forces of the Philippines requests information, we take their information requirements and we try to answer within whatever means we have over here in country. That includes aerial surveillance, which provides full-motion video.” 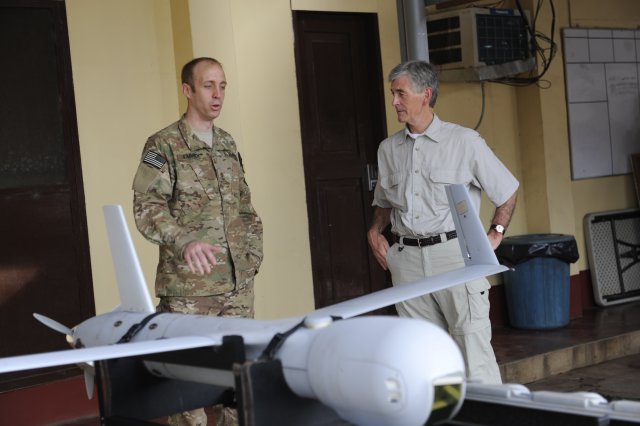 Davao Today, an online news magazine, has been following the story of the 01 September Paquibato blast incident in Fatima village, Paquibato District, Davao City.We were there when the Third Party Facilitators helped in the release of the NDFP indemnification of 5,000 pesos to the blast victims.
In reaction to the said event, Peace Panel Chair Alexander Padilla of the government of the Repulic of the Philippines (GPH) issued a statement which was posted in the OPAPP website last 21 September. In this light, we hope to get your reaction on the points raised by GPH’s Padilla....

The Philippines has deployed 800 more Marines and opened a new headquarters to guard its interests in the disputed Spratlys islands, which China also claims, a senior military official said Sunday, September 30. Straddling vital shipping lanes and believed sitting atop vast reserves of mineral deposits, including oil, the Spratlys chain in the South China Sea (West Philippine Sea) has long been considered a flashpoint for conflict in the region.... The Marines will not be stationed on the Spratlys but will patrol nearby....

http://www.rappler.com/nation/13335-afp-sends-more-troops-to-guard-spratlys
Posted by Retired Analyst at 3:55 AM No comments:

Email ThisBlogThis!Share to TwitterShare to FacebookShare to Pinterest
From InterAksyon (Sep 30): Wanted: More Filipinos in Kalayaan, as China improves 'fishermen's shelter' in Spratlys

The commander of the Western Command (WestCom) who has jurisdiction over the disputed Spratly Islands in the West Philippine Sea (WPS) confirmed on Sunday that China has continued the expansion and improvement of its military facilities in the area it occupies. “Yes, of course [they keep expanding], although they claim that these are fishermen sanctuaries, not at all. As we observed most of the time, its (facilities are) frequented by military vessels,” WestCom commander Lt. Gen. Juancho Sabban said in a phone interview....

http://www.interaksyon.com/article/44389/wanted-more-filipinos-in-kalayaan-as-china-improves-fishermens-shelter-in-spratlys
Posted by Retired Analyst at 3:51 AM No comments:

A former rebel who participated in one of the raids done by the New People’s Army (NPA) here on December 23, 1987 apologized in public during a recent peace forum held at the Kiangan Memorial Shrine,here as part of peace effort. Arsenio Humiding, who admitted that he participated in a raid at the municipal hall here, said that he is sorry for participating in said incident and that the raid was not his personal decision but that of the organization....

Email ThisBlogThis!Share to TwitterShare to FacebookShare to Pinterest
From the Philippine Star (Sep 30): 2 leftist rebels killed in firefight in Sultan Kudarat

Two New People's Army rebels were killed, another one was captured and a government soldier was injured in a firefight in Columbio, Sultan Kudarat, the military said today. Alexis Bravo, commander of the Army's 27th Infantry Battalion, said his men were responding to a report of rebel presence at Sitio Tiruray in Telafas village when the fighting broke out around 3:20 a.m Saturday....

http://www.philstar.com/Article.aspx?articleId=854479&publicationSubCategoryId=200
Posted by Retired Analyst at 3:42 AM No comments: