The Bagong Alyansang Makabayan and its affiliate organizations held a rally in front of the fountain of justice at the old Bacolod City Hall, with placards showing statements on issues on homelessness, land reform, human rights, and justice for the killings in Sagay City recently, among others.

In a statement, Bayan said that the democratic revolution led by Andres Bonifacio and Dionesio Magbuelas or “Papa Isio” should be continued as they played significant roles in the country and in Negros Occidental to pursue freedom and liberation, and free distribution of land.

The statement also said that revolutionary leader Papa Isio was betrayed by big landlords in the province for his advocacy to distribute lands to the farmers for free.

Bayan also said that landlords want to erase the history of the revolutionists through criminalizing them for pursuing land reform.

It claimed the Escalante massacre and the recent Sagay killing were among the activities made to stop farmers from claiming lands through genuine land reform. 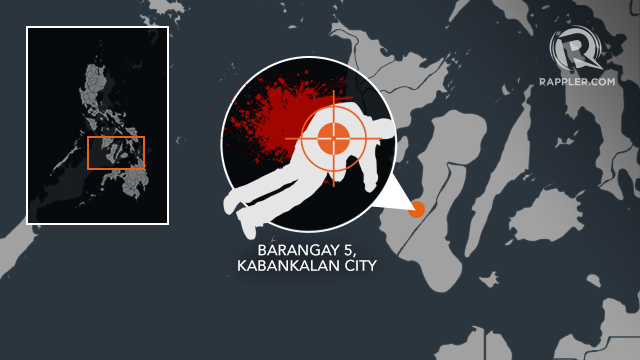 Benjamin Ramos, secretary-general of the National Union of Peoples' Lawyers-Negros Island, was in front of a store near the public plaza when he was shot at close range by two unidentified men.

Karapatan-Negros secretary-general Clarizza Singson, quoting the victim's wife, said the lawyer was having a smoke when he was attacked around 10:20 pm.

Singson said the victim was rushed to a hospital but he succumbed to 4 gunshot wounds, 3 in the front and one in the back.

Ramos, who represented a number of political prisoners, was the lawyer of youth leader and University of the Philippines Cebu alumna Myles Albasin and her 5 companions – known as the Mabinay 6 – who were arrested in March this year in Mabinay, Negros Oriental, following an alleged clash with government troopers, although they later tested negative for gunpowder residues.

The lawyer, being a peasant advocate, had also founded the farmers' organization Paghiliusa Development Group.

From the Mindanao Times (Nov 5): Two rebels surrender in ComVal after clash


Troops of the 66th Infantry Battalion encountered members of the Pulang Bagani Command (PBC) 8 of the New people's Army resulting in the surrender of two Communist guerrillas in New Bataan, Compostela Valley on Oct. 30.

Capt. Jerry Lamosao, the spokesperson of 10th Infantry Division, said soldiers of the 66th Infantry Kabalikat Battalion were conducting operations in the hinterlands when they clashed with five rebels at the vicinity of the mining site in Piagabangan, Barangay Andap, New Bataan.

The surrenderees were identified as alias Romy, political guide, and alias Dandan.
The soldiers were reportedly acting on a tip from a local miner about an armed group arriving at the mining site previously.

"For a long period of time, the NPAs operating in the area had not visited the site," he said, adding that the group has been forcibly recruiting residents to bolster their ranks.

"The NPAs in the area are now being denounced by the communities where they have previously thrived, thereby forcing them to target other places like mining areas to stage their activities and enhance their survival," he added.

“To all Kabalikat troopers, you have just further demonstrated your sincerity toward the realization of our campaign. I urge each and every one of you to remain focused toward this objective," Brig. Gen. Reuben Basiao, commander of 701st Infantry Brigade, said.

"The reduction in manpower of our enemies will surely be a significant development as we exhaust all efforts to put this to an end," he added.
https://www.facebook.com/notes/mindanao-times/two-rebels-surrender-in-comval-after-clash/2105787372775744/
Posted by Retired Analyst at 7:32 PM No comments:

From the Mindanao Times (Nov 5): 3 NPAs yield in Surigao


Three members of the New People's Army (NPA) surrendered to the Alpha Company of the 75th Infantry Battalion in Sitio Quarry Siete, Barangay Dona Carmen, Tagbina, Surigao del Sur on Nov. 3.
Capt. Edwin Leo Francisco, the civil-military operations (CMO) officer of the battalion, identified them as alias Adan, 45, resident of Barangay So Katipunan, Barangay Bunawan Brook, Bunawan, Agusan del Sur; alias Telik, 41, and alias Camote, 35, both residents of Quarry Siete.
Francisco said they were members of Guerrilla Front 14. They brought along one IED, one M653 bearing with one long magazine loaded with live ammunition; a .30 caliber M2 Carbine; and one homemade 9mm Ingram.
They will be processed to avail of the Enhanced Comprehensive Local Integration Program (E-Clip), which includes the following benefits: P15,000 for immediate cash assistance; P50,000 for livelihood assistance; and P90,000.00 - P95,000 for firearms (depending on the type of firearm) and access to other government assistance.
Lt. Col. Jaime Datuin, the commanding officer of the 75IB, thanked the surrenderees for leaving behind the armed movement.
"Let us have a great participation and give crucial value to support the spirit of democracy and living in accordance with our existing laws," the battalion commander said.
https://www.facebook.com/notes/mindanao-times/3-npas-yield-in-surigao/2105789389442209/
Posted by Retired Analyst at 7:17 PM No comments:

The Philippine Navy (PN) will formally welcome the BRP Dagupan City (LC-551) and the 200-man contingent aboard her at the Commodore Divino Pier, Naval Station Jose Andrada, Manila Thursday.

The ship and military personnel aboard her constitute the Naval Task Force 88, the PN contigent to the first-ever ASEAN-China Maritime Exercise held last Oct. 21 to 28 in Zhanjiang, China.

ACMEX 2018 is an exercise hosted by the Republic of Singapore's Navy and China’s Peoples Liberation Army Navy (PLAN).

It aims to promote regional cooperation between ASEAN Navies and the PLAN. BRP Dagupan City and the 200-man contingent aboard her left Sangley Point, Cavite last Oct. 17, arriving in Zhiangjiang, China on the 20th.

It was commissioned to the PN service in the 1990s.

"As confirmed by the Commander Naval Air Group (CNAG), the AW-159 has just started initial test flight as part of the manufacturer's trial. It is still scheduled for a series of test flights before scheduling its handover to the Philippines. According as well to CNAG, the flight signals the completion of the first unit," defense department spokesperson Arsenio Andolong, said in a text message to the Philippine News Agency (PNA) on Tuesday.

The Navy is acquiring two AW-159 helicopters for PHP5.4 billion, including their munition, mission essential equipment, and integrated logistic support.

The AW-159, formerly called the Future Lynx and Lynx Wildcat, is an improved version of the Westland Super Lynx military helicopter.

The helicopter, which has been ordered for the Royal Navy and British Army, is capable of speeds of 291 km. per hour, and has a range of 777 km., ferry range of 963 km., and an endurance of one-and-a-half hours (four hours and 30 minutes if fitted with auxiliary fuel).

The AW-159 can also be armed with rockets, machine guns, missiles, torpedoes, and depth charges.

Director Jose Maria Victor DF Ramos of the Philippine National Police’s (PNP) Directorate for Logistics led the turnover rites at the grandstand where the firearms, ordnance, and security equipment were piled up.

Ramos reminded the Calabarzon police force to show concern for the equipment.

“Kapag may nakita kayong konting sira sa ating mga kagamitan, i-report ninyo agad ito sa inyong immediate supervisor upang magawan ng paraan at hindi na lumala pa (If you notice a slight damage to our equipment, please report them immediately to your supervisor so we can find a way to fix these and prevent further deterioration),” he said.

Ramos also led the presentation of awards to deserving police officers and personnel for their dedication and commitment to the police service.


Carranza thanked the PNP hierarchy for the new weapons and hi-tech gadgets as he, Ramos and top regional police officials inspected and tried the newly-acquired security equipment before these were issued to the various police units.

“Rest assured these items will be given utmost care and would certainly be utilized in its maximum in maintaining peace and security of the people of Calabarzon,” he said.

Four soldiers, including an officer, were wounded in a firefight against Abu Sayyaf Group (ASG) bandits in Sulu, the military said Tuesday.

Dela Vega said the troops were conducting focused military operation when they clashed with some 50 ASG bandits led by Radullan Sahiron, the senior leader of the ASG.

The identities of the wounded officer and three enlisted men were not immediately released, but dela Vega said they belong to the Army’s 32nd Infantry Battalion.

The wounded military personnel were rushed for treatment to the Kuta Heneral Teodulfo Bautista Station Hospital in Jolo, the capital town of Sulu.

Dela Vega said the Abu Sayyaf bandits suffered casualties based on the report of the residents.

He said the troops recovered at the clash site 50 kilos rice, personal belongings with blood stains, and assorted medicines.

“The Joint Task Force Sulu continues to intensify the conduct of offensives against the Abu Sayyaf to neutralize the remaining bandits,” dela Vega said.

The ASG bandits are still holding nine hostages, a Dutch and a Vietnamese, and seven Filipinos.

Gaerlan said the troops from the 10th Infantry Battalion were on security operations when they chanced upon 15 NPA rebels, triggering a  firefight.

NPA rebels were believed to have suffered injuries or casualties as bloodstains were visible in their withdrawal path, the military official said, adding no soldier was either killed or wounded.

A separate clash around 7:50 a.m. on Tuesday in Jimenez town, however, wounded a soldier, Gaerlan said.

Gaerlan said the firefight ensued after troops belonging to the 14th Division Reconnaissance Company chanced upon a group of NPA rebels.

“The combat operation was conducted in response to the report of a concerned civilian regarding NPAs presence in their communities,” he said.

“The armed encounters could have been prevented if the NPAs surrendered and took advantage of the Enhance Comprehensive Local Integration Program of the government for them to go back to the mainstream society,” Murillo said.