Philippine President Rodrigo Duterte, seen here with Indian Prime Minister Narendra Modi during their meeting in New Delhi on Jan 24, said it is fine to blow up terrorists “because they wanted that life anyway.” Photo: Reuters
President Rodrigo Duterte has brushed aside a purported plan of terrorist group Islamic State (IS) to assassinate him, saying that he will not be intimidated by “mere” threats and has been living a “dangerous life” for a long time.

“I will stick to what destiny has given. If I go tomorrow, then I go,” the President told reporters over the weekend after returning from a commemorative summit between the Association of Southeast Asian Nations (Asean) and India.

“Assassination? If it’s my time, it’s my time. So I should not be deterred. I should not be discouraged by just mere threats. I’ve lived with it. I’ve been a prosecutor for nine years doing trial work. I live with a—it was a dangerous life then as it is now,” he added.

Mr Duterte, who was responding to queries from the media following a report by an Indian news outfit that he was a target of the terror group during his visit to India, has repeatedly warned against the possible retaliation of IS after the Philippine troops defeated IS-linked militants who laid siege on Marawi City for five months in 2017.

On tackling the threat posed by IS in the region, he added that Indonesian and Malaysian troops were free to enter the Philippines in pursuit of terrorists.

All Jakarta and Kuala Lumpur needed to do was to inform the Armed Forces of the Philippines (AFP) that they were pursuing terrorists, he added.

“Me, I will allow troops of Indonesia and Malaysia to come in if they are pursuing a lead…and they would think that they are able (to defeat terrorists). Just inform the Armed Forces about it,” he said.

He added that Philippines was also willing to join the foreign troops.

“Or we can be of assistance. If it is joint operation, you bring along my soldiers because that’s what I’ve been saying. Hot pursuit in the seas,” he said, reiterating a point he had made in late 2016 following discussions with his Malaysian and Indonesian counterparts.

“I said if it’s terrorist, my advice to them is just blow them up,” he said, adding that blowing up terrorists was no problem “because they wanted that life anyway.”

“They know that it is very dangerous,” he added.

As far as Asean was concerned, he said that he had suggested that the regional grouping “comes up with a format” on how to effectively combat terror.

“It’s like this, we have been talking about economics. And leaders meet almost every year to talk about Asean and what is good. But it is geared towards more of the economic problems,” he said.

India-based The Print, quoting a security agency source, had said last Thursday (Jan 25) that there were intelligence inputs that “the IS has its people and is planning to strike” against Mr Duterte.

The President’s agenda to militarily wipe out Islamist extremism from the state of Mindanao—along with the killing of Isnilon Hapilon, leader of Abu Sayyaf and ‘emir of the IS’ in Southeast Asia in the city of Marawi—has provoked the group to mobilise sleeper cells based in Indonesia, it added.

Philippines Defence Secretary Delfin Lorenzana described the threat against Mr Duterte as “normal” but assured the public that security measures were in place to ensure the President’s safety.

“The President is aware of it and his security is doing their job as they should assisted by the PNP (Philippine National Police), AFP (Armed Forces of the Philippines) and all government security forces specially on intel,” he added.

In a separate statement, National Security Adviser Hermogenes Esperon Jr. said Mr Duterte knew all along that he was a target of IS but added that the President was not demoralised.

“After PRRD (President Rodrigo Roa Duterte) smashed them in Marawi, that’s the least they could do to their nemesis. Threaten him. But we know that. PSG (Presidential Security Group) knows that,” Mr Esperon said.

http://www.todayonline.com/world/duterte-brushes-aside-report-assasination-threat-says-neighbours-troops-free-enter-philippines
Posted by Retired Analyst at 7:53 AM No comments:

The Philippine Air Force (PAF) and the United States Air Force are looking at holding bilateral training, including live-fire exercises to enhance their military cooperation.

During a meeting between Armed Forces of the Philippines (AFP) Chief of Staff Gen. Rey Leonardo Guerrero and the US Pacific Air Force Secretary Heather Ann Wilson at the Hall of Flags at Camp Aguinaldo, Quezon City on Friday, the two discussed ways on how to further strengthen the strong military relationship between the Philippines and the United States.

In their meeting, General Guerrero thanked the Secretary for the United States’ support in the successful operations against the Maute-IS group in Marawi City, especially in capability and technical cooperation.

The AFP Chief also expressed his appreciation for US military assistance in further developing the PAF’s capabilities.

Gen. Guerrero and Sec. Wilson also agreed that peace and security are essential in Southeast Asia.

Secretary Wilson is the 24th Secretary of the Air Force, one of the three components of the US Department of Defense. She is responsible for organizing, training, and equipping 660,000 air force personnel.

https://news.mb.com.ph/2018/01/29/ph-us-air-force-officials-agree-to-strengthen-military-ties/
Posted by Retired Analyst at 5:19 AM No comments: President Joko "Jokowi" Widodo and Philippine President Rodrigo R.Duterte attend a press conference at the State Palace in Jakarta on Sept.9, 2016. They signed a memorandum of understanding on maritime security in Sulu waters. (Antara/Widodo S. Jusuf)

Philippine President Rodrigo Duterte on Saturday said Indonesian and Malaysian troops were free to enter the Philippines in pursuit of terrorists.

Speaking to reporters upon his arrival from a state visit to India, the President said all Jakarta and Kuala Lumpur should do was inform the Armed Forces of the Philippines about operations to hunt down terrorists in Philippine territory.

“I will allow troops of Indonesia and Malaysia to come in,” the President said.

He said Philippine soldiers would be willing to join the operations.

“We can be of assistance,” Duterte said.

He said he had already informed his Indonesian and Malaysian counterparts about allowing their troops into Philippine territory in pursuit of terrorists.

“I said if it’s terrorist, my advice to them is just blow them up,” the President said . “Blow them up,” he said. He said he had run out of patience with terrorism, especially that of Abu Sayyaf.

http://www.thejakartapost.com/seasia/2018/01/29/duterte-order-indonesian-malaysian-troops-free-to-enter-ph--.html
Posted by Retired Analyst at 12:15 AM No comments: 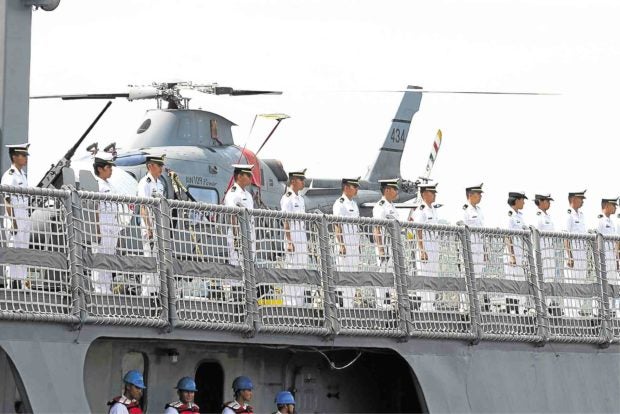 BRP Gregorio del Pilar and its crew members would take part in next month’s antiterror drills. —ARJOY M. CENIZA
DAVAO CITY — Authorities were planning to simulate their response to a terror attack that would require a lockdown of the city in what was described as a massive drill to be replicated in other urban areas nationwide.

Director Camilo Pancratius Cascolan, head of the Philippine National Police Directorate for Operations, said the antiterror drill, involving hundreds of soldiers and policemen, would take place by the second week of February.

No one would be allowed to leave or enter the city during the lockdown.

It would be the first in a series of antiterror and anticrime drills planned nationwide to test government capability to respond to threats and emergencies, Cascolan said.

This city was picked as pilot area for the exercises.

He said contingents from the Office of Civil Defense and the Bureau of Fire Protection would also be participating.

Cascolan said he was set to meet with local officials and legislators, led by Mayor Sara Duterte, prior to the conduct of the activity to discuss with them the temporary lockdown.

“This is part of our operational strategies,” Cascolan said. “The least we can get out of this is that everybody should know what to do,” he said. “Everybody will take responsibility,” he added.

Cascolan said the simultaneous exercises on terrorism and criminality would be carried out by police and other law enforcement units in downtown Davao and in vital facilities, like the Davao International Airport.

Maritime exercises would also be conducted off the coast of Davao, he said.

Soldiers, according to Cascolan, would conduct counterinsurgency operations simultaneous with the drills.

Clashes between soldiers and New People’s Army (NPA) rebels had taken place in the hinterlands of the city. The latest was on Tuesday when one junior officer was killed and two other soldiers were wounded.

“We will be inviting lots of VIPs (very important persons) from other parts of Mindanao,” Cascolan said. “This will be role-playing,” he added. The drills would be held nationwide.

A number of terror attacks struck the city during President Duterte’s tenure as mayor. 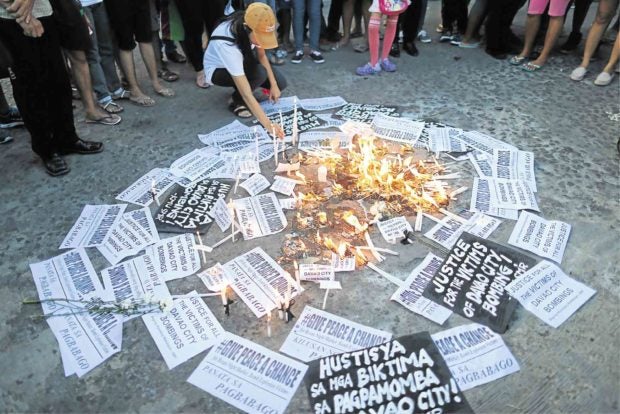 Davao City residents leave messages of sympathy and condolences for 15 people who were killed in the bombing of the Roxas Night Market on Sept. 2, 2016. —JEOFFREY MAITEM

On Dec. 28, 1993, seven people were killed while 151 others were wounded when Abu Sayyaf members set off three improvised explosive devices inside the San Pedro Cathedral. A suspect was arrested in Sulu two years after.

Terrorist bombings
On March 4, 2003, 22 people were killed and more than 150 others were injured when a bomb ripped through a waiting shed outside the old Davao International Airport. Authorities had blamed the Jemaah Islamiyah (JI) for the attack.

On April 2, 2003, 16 people were killed while 45 others were wounded when a bomb exploded at the Sasa Wharf. The JI was also tagged in the Sasa bombing.

On Feb. 14, 2015, a 12-year-old vendor was killed when a bomb exploded at the Davao City Overland Terminal in Ecoland in the village of Matina.

On Sept. 17, 2013, several moviegoers were injured when explosions took place inside theaters in two malls in the city. Then Interior Secretary Mar Roxas said a “new Muslim group” was behind the theater bombings but did not say what the group’s name was.

On Sept. 2, 2016, 15 people were killed and 70 others were wounded when a bombed ripped through the Roxas Night Market. Abu Sayyaf owned up to the bombing, but investigation revealed it was the work of Maute group.

https://newsinfo.inquirer.net/964306/davao-city-lockdown-planned-for-antiterror-drills
Posted by Retired Analyst at 12:00 AM No comments: