Mayor Climaco is becoming desperate, and she is ignoring the reality in Zamboanga, and the historical facts on the pre-colonial existence of the Moro People in the Zamboanga Region.

What a shame, and big lie!!! What has driven the bellicose mayor to desperation to shamelessly uttered such unfounded claim justifying her unwavering hardstand against inclusion of Zamboanga City to Bangsamoro? Was she in her state of sanity conscious, and prudently aware of her anti-Moro dialectic?

Such an act of provocation by the mayor is tantamount to declaration of war against the Moro fronts based in Region -9 communities. Are those valiant fighters in Zamboanga gone? Were all of them annihilated, and got martyred in protracted war since 1970? Were all of them gone forever leaving no offspring to continue unfinished task they have left of? Of course no. They are very much alive, and multiplying in numbers and existing in every community in Region- 9, contrary to Mayor Climaco-led RPOC declaration.

Such false declaration is obviously aimed, and bringing the attention of congress to urgently convince them to expunge the “opt-in” provision from BTC Draft BBL.

Will the Moros all over the island provinces, and mainland Mindanao allow her to successfully usurp a part of Moroland, and thereafter live happily at their expense? Even if the mayor has all the liberty in asserting her democratic right to freedom of speech, the Bangsamoro people should break their silence to assert their democratic right to freedom, and right to self-determination.

Most number of Barangay’s and sitios in Zamboanga City are Moro by name except for few manipulated, and concocted from Moro to Latin, i.e Sta.Maria, Sta. Barbara, San Roque, San Jose.... How can Mayor Climaco explain this? How would she unhook herself from the anomalous act?

There is no mention of Chavacano as a people in any Moro history books written, and authored by either Filipinos or foreign historians. What Book of history could you present to the world mentioning Chavacano existence before the Spaniards set foot to Moroland to affirm your claim on Zamboanga as the only “Latin City of Asia?” Which tribe or people can the Chavacanos proudly trace their roots?

Both the Tausog and Maguindanao existed before, and still existing until now, whereas the Chavacano emerged as a people only after colonialist Spaniards left the Philippines. Where were you in those glorious days? Were you hiding from the Moro overlord, the sultans?

An engraved historical landmark at the threshold of city hall reads: ANG GUSALING ITO AY SIMBOLO NG LUKLUKANG PAMAHALANG MUSLIM SA PANAHON NG PANANAKOP NG GOBYERNONG ESTADOS UNIDOS DE AMERIKA, 1906-1917”. It was then an attraction to every passing public. Now it is eternally blackened to conceal what history had to say about Zamboanga as capital of Moro province.

Mayor Climaco is being reminded by the Moros of Zamboanga Region to bear in mind that she can kill the dreamers but can never kill their dreams.

http://www.luwaran.com/news/article/1126/mayor-climaco-is-desperate--ignores-current-situation--historical-facts
Posted by Retired Analyst at 11:32 PM No comments: 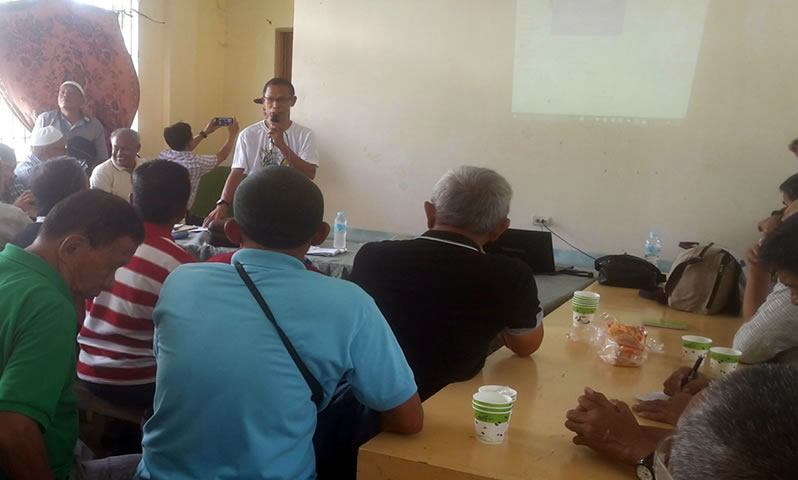 The Kutawato Provincial Committee of the Moro Islamic Liberation Front held a peace forum on the GPH-MILF Peace Implementing Process in support to the enactment of the new Bangsamoro Basic Law by Philippine Congress.

“Bangsamoro organizations like those who are present today are united in working hand-in-hand in a most civilized, and democratic means to achieve the Moro peoples’ right to self-determination as stipulated in the United Nations Charter”, said Nasser Pulindanao, FBCSOs Vice President.

Once enacted by congress, and ratified in a plebiscite, the Bangsamoro Region will replace the Autonomous Region in Muslim Mindanao (ARMM) described as a “failed experiment”.

“The Bangsamoro Assembly held in Simuay, Sultan Kudarat, Maguindanao last November 26-287, 2017 was undertaken in accordance with the executive order issued by President Rodrigo Duterte. It aimed to gather, and seek the support of the people for the immediate passage of the new Bangsamoro Basic Law. Keynote Speaker President Duterte stressed the importance of correcting the historical injustices committed against the Moro People since colonial times, and will urge congress to hold special sessions to fast track the passage of the BBL”, Abdula added.

in the passage of the draft bill in the Congress”, Abdula added. 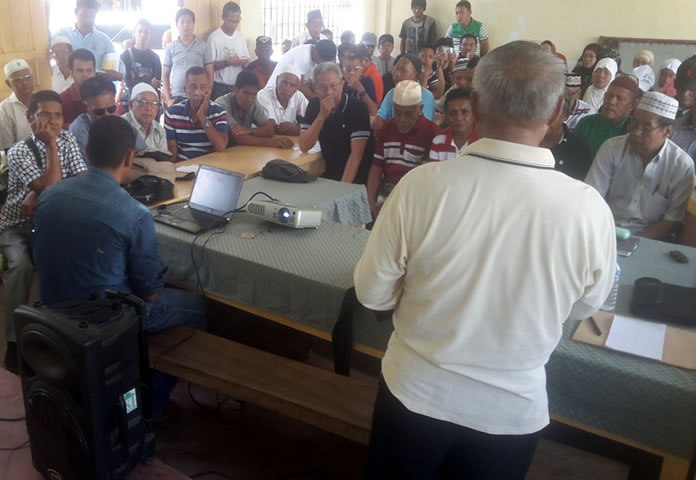 http://www.luwaran.com/news/article/1124/milf-kutawato-provincial-committee-holds-peace-forum
Posted by Retired Analyst at 10:54 PM No comments: 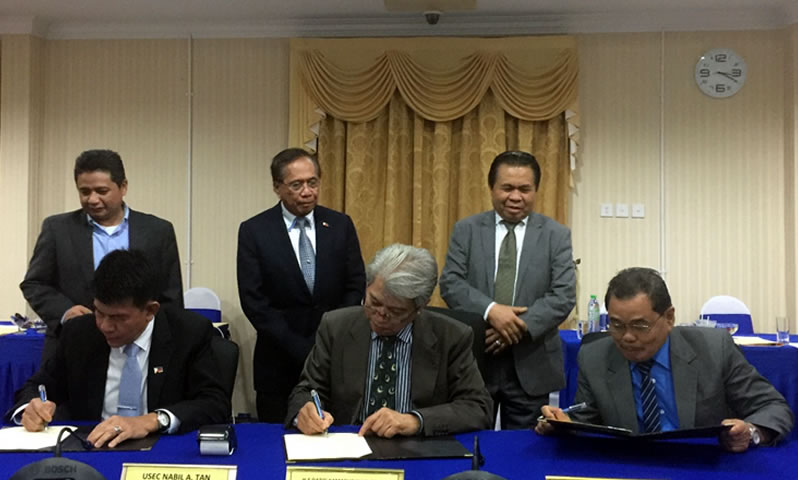 Certification renewing the mandate of the Civilian Protection Component (CPC) of the International Monitoring Team (IMT) for two years until 14 December 2019, and welcoming the Catholic Relief Services (CRS) and the Consortium of Bangsamoro Civil Society (CBCS) as members of the IMT-CPC were also signed.

Malaysian Facilitator Dato Kamarudin Bin Mustafa in his opening statement mentioned his gladness over the presence of President Rodrigo Roa Duterte in the recently Bangsamoro assembly, and hopefulness for a way forward in the peace process.

Secretary Jess Dureza, in his message expressed his fervent wish , that the peace process will move forward, though it may not happen “one time”, but rather “piece by piece” , he hopes it will come up to a real solution of the Mindanao problem. 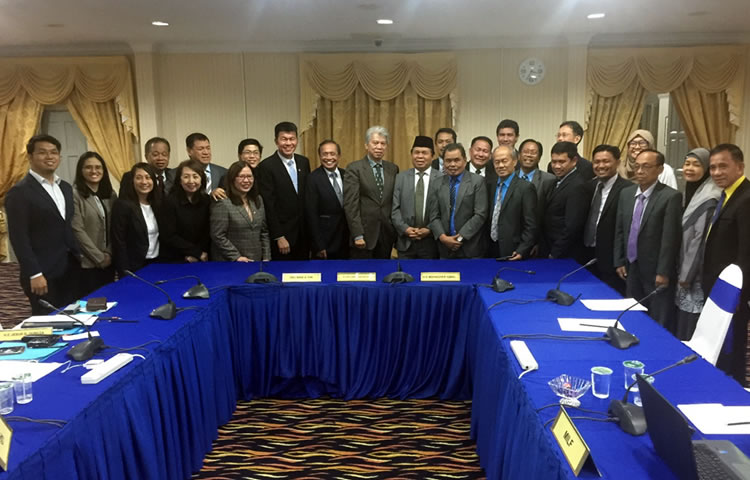 http://www.luwaran.com/news/article/1125/gph-milf-pips-hold-special-meeting-in-kuala-lumpur
Posted by Retired Analyst at 10:46 PM No comments:

MANILA (DWDD) – The Pakistan Navy Ship (PNS) SAIF (FFG-253), one of the four F-22P or Zulfiguar (Sword) Class frigates of Pakistan with onboard Anti-Submarine Warfare helicopter Z9EC had a successful three-day goodwill visit from December 14 to 17, 2017.

PN representatives accorded the visiting navy a welcome ceremony upon arrival followed by a port briefing for security and health aboard the designated PNS vessel. NPAO/MCAG

http://dwdd.com.ph/2017/12/18/navy-to-navy-engagemment-pakistan-navy-holds-goodwill-visit/
Posted by Retired Analyst at 10:31 PM No comments:

MANILA (DWDD) – The Philippine Navy served as hosts for the Goodwill Visit and Training Program of the Pakistani Navy Ship SAIF (FFG-253) on December 14-17, 2017.

The ship is one of four F-22P or Zulfiguar (Sword) Class frigates of Pakistan with onboard Anti-Submarine Warfare helicopter Z9EC.

The visit aims to revive and strengthen the Pakistani-Philippine relations. NPAO/MCAG

DWDD: SHOW OF TRUST | Extension of Martial Law in Mindanao

NSFA, Panacan, Davao City (DWDD) – Lt. General Benjamin Madrigal, Jr., the Commander of Eastern Mindanao Command (EMC) and concurrently the Martial Law Chief Implementor in Eastern Mindanao, acknowledge the grant of the extension of Martial Law (ML) – as requested by the President – as a show of trust and confidence not only by the Congress but also the different Local Government Units supporting it.

“We acknowledge that the people, through their representatives, continuously put their trust with the AFP particularly EMC when they granted the extension of Martial Law,” LtGen. Madrigal Jr. said.

“In return, with the existing mechanism established with other government agencies and multi-sectoral group, we would like to assure the public that EMC will faithfully perform its mandate to protect the people and the communities in Eastern Mindanao, and thwart any group from conducting acts of terrorism while preventing the spillover of violence and radicalism in the region. Our implementation will always be ruled by the principles of necessity, proportionality, rule of law and respect of human rights” he added.EMC PIO / MCAG

CAMP GEN EMILIO AGUINALDO, Quezon City (DWDD) – The Armed Forces of the Philippines will be celebrating its 82nd Anniversary this week.

The AFP has initiated various programs to highlight this coming celebration.

The DRC2017 aims to practice, evaluate and review the existing protocols and procedures, in facilitating a close and effective collaboration amongst response teams of the AFP, LGUs, other government agencies and NGOs; and to test their technical capabilities in responding to collapsed structure incidents involving mass casualty.

The AFP Photography Contest was also launched. The contest has three categories:
The Contest Rules and Guide were posted on the AFP Official Facebook and Website while the awarding of winners was held this Morning, December 18, at the AFP General Headquarters Grandstand.

The AFP also exhibited Static and Kinetic Display last December 9 – 10, at Bonifacio High Street, where the different capabilities of the AFP, as well as photos and videos were displayed, in line with this year’s anniversary theme. Recruitment desks for all Branch of Service were also present.

Lastly, the Kapayapaan Awards will be held on December 20 2017 as part of the AFP Day Celebration.

The goal is to recognize individuals and/or organization for their invaluable and continuing contributions/efforts in the conduct of the AFP’s DSSP Kapayapaan and AFP Transformation Roadmap.

The AFP has been presenting the Bayanihan Awards in the past years. For this year, we have changed the title to “Kapayapaan Awards” in line with the AFP DSSP Kapayapaan. AFP PAO / MCAG

CAMP GENERAL VICENTE LUKBAN, Catbalogan City (DWDD) – Elements from 20th Infantry “We Lead” Battalion while conducting pursuit operations at Barangay Hinagonayan, Catubig, Northern Samar encountered member of the terrorist group New People’s Army, which resulted to the recovery of one high powered rifle on December 18, 2017 at 7:30 o’clock in the morning.

No casualty on the government side was reported while undermined on the enemy.

It may be recalled that on December 16, 2017, troops from the 20th IB conducting Humanitarian Assistance and Relief operations to flood victims of TS “Urduja” were ambushed in the same area prompting the soldiers to be on high level of alert.

In his statement, Brig. Gen. Mario G. Lacurom, Commander, 803rd Infantry Brigade said, “Your Army in Northern Samar strongly condemns the atrocity perpetrated by the NPA in the hinter barangays that caused fear and panic among the residents. Such atrocities are clear violation of the International Humanitarian Law. We call upon the people to rally support behind your soldiers and act against these terrorists. Moreover, we criticized this kind of act of terrorist NPAs that instead of helping the victims of disaster, they are making the disaster response complicated to the detriment of those who are already affected,” Lacurom added. 8DPAO/MCAG

http://dwdd.com.ph/2017/12/19/heightened-alert-8id-troops-clash-anew-with-npa-terrorists/
Posted by Retired Analyst at 10:19 PM No comments:

SANTOLAN, Pasig (DWDD) – The Armed Forces of the Philippines and the Light Rail Transit Authority will be signing a Memorandum of Agreement, today December19, 2017 3p.m.(Tuesday) at the LRTA – 2 Depot, Santolan, Pasig City.

In return, this Command presented its gifts through the Groundbreaking Ceremony of the Repair and Enhancement of the Admiral’s and Bachelor Officer’s Quarters as well as the ongoing renovation of the Sts. Peter and Paul Chapel.

After the program, a fellowship night was held for the officers and men of Naval Forces Central. NFC/MCAG