The Technical Working Group (TWG) for the Capacity Building for Community Development in Conflict-Affected Areas in Mindanao (CD-CAAM) Project funded by the Japan International Cooperation Agency (JICA) had endorsed the adoption of the pilot project areas. The TWG adopted the two municipalities for the pilot projects during its 2nd Meeting in Davao City last week, and the CD – CAAM Project Steering Committee subsequently will have to approve these two pilot project areas....

http://www.luwaran.com/home/index.php?option=com_content&view=article&id=2871:twg-for-jica-funded-cd-caam-endorses-pilot-project-areas&catid=31:general&Itemid=41
Posted by Retired Analyst at 11:25 PM No comments:

Email ThisBlogThis!Share to TwitterShare to FacebookShare to Pinterest
From the Manila Standard Today (Oct 4): Another US submarine to dock at Subic

The United States has sent its fourth submarine to the Philippines this year, and it’s expected to dock at Subic Bay in Zambales on Thursday, according to a statement released on Wednesday by the US Embassy in Manila.... “USS Olympia (SSN 717), a submarine of the Los Angeles class design, will arrive in Subic Bay on Thursday, October 4, for a routine port call that highlights the strong historic, community, and military connections between the United States and the Republic of the Philippines,” the embassy said. “This visit will allow the ship to replenish supplies as well as give the crew an opportunity for rest and relaxation....

http://manilastandardtoday.com/2012/10/04/another-us-submarine-to-dock-at-subic/
Posted by Retired Analyst at 5:54 PM No comments:

A maritime security expert said the country's maritime security capability is 'deficient' and is unable to face the increasing tensions in the territorial disputes with China and other claimant countries in the West Philippine Sea. Dr. Samuel Bateman, Australian research fellow on maritime security said the incidents in the disputed Scarborough Shoal, which Chinese ships continue to occupy, showed that the Philippines must upgrade its naval and air capabilities. "I think the particular requirement of the Philippines is the air surveillance requirements. Presently, the Philippine armed forces do appear to lack effective maritime patrol aircraft, surveillance aircraft," said Bateman at a press briefing at the opening of the 3rd ASEAN Maritime Forum held at the Manila hotel....

http://www.gmanetwork.com/news/story/276705/news/nation/security-expert-details-deficiencies-in-phl-maritime-defense
Posted by Retired Analyst at 5:45 PM No comments:

The European Union (EU) has temporarily suspended its funding assistance to the Mindanao People’s Caucus (MPC), a non-government organization involved in peace efforts in Mindanao, pending investigation into “potential ineligible costs” in the group’s projects. In a letter dated Sept. 25, Willem Verpoest, contracts and finance head of the EU Delegation to the Philippines, informed MPC head Mary Ann Arnado that EU auditors have found “a number of potential ineligible costs” during a recent financial audit on a number of the NGO’s projects....

Some 500 indigenous people were aided by the medical-dental civic action program (Medcap) conducted by Army’s 401 Infantry (Unity) Brigade at Barangay New Maug, Prosperidad, Agusan del Sur on October 02.  Cpt. Rojel Omictin, commanding officer of Charlie Battery, 10th Field Artillery Battalion, 401B spearheaded the Medcap together with the medical teams of the Unity Brigade and the local government unit of Prosperidad, Agusan del Sur.... “This Medcap is a Bayanihan effort between Army troopers and other local government agencies to help our less fortunate brothers and sisters in far-flung barangays who cannot afford to go to expensive hospitals for consultation and medication,” Gan said....

Email ThisBlogThis!Share to TwitterShare to FacebookShare to Pinterest
From the Philippine News Agency (Oct 3): Panay island-based 82IB gets new commander

The Philippine Army’s 82nd Infantry Battalion (82IB) will have a change of command ceremony at its Camp Monteclaro headquarters in Miag-ao, Iloilo on Thursday morning. Lt. Col. Aldwine Almase will succeed outgoing commander Lt. Col. Julius Miranda who is scheduled to assume position of higher responsibility after more than a year stint as commander of the 82IB. Almase is Assistant Chief of Staff for Civil-Military Operations of the Army's 3rd Infantry (Spearhead) Division (3ID) based at Camp Macario Peralta Jr. in Jamindan, Capiz, Almase has stellar qualifications being a consistent topnotcher graduating number 4 (number 2 in the Army of his class) in the Philippine Military Academy (PMA) Class 1992....

One more day. The Philippine government (GPH) and Moro Islamic Liberation Front (MILF) peace panels today agreed to extend by one more day the ongoing negotiations to finalize the framework agreement that they hope to sign within the month. The panels had earlier scheduled the talks from October 2 to 5. Whether or not Saturday, October 6, will be the day the panels will declare that the framework agreement is done and ready for signing will depend on developments and consultations with their respective principals in the next two days. What is certain, however, is that both panels agree they are “almost there....”

Email ThisBlogThis!Share to TwitterShare to FacebookShare to Pinterest
From the Mindanao Examiner (Oct 3): Gunmen kill tribal leader in the Southern Philippines

A leader of a Higaonon indigenous tribe, who was fighting for their ancestral rights, had been killed in an attack Wednesday in the southern province of Misamis Oriental. Gilbert Paborada, also the chairman of the organization called Pangalasag, was brutally killed inside a house that has become his sanctuary for months now, according to the Alliance for the Advancement of People's Rights. The group cited the news of Paborada’s death on a report by the Rural Missionaries of the Philippines in Northern Mindanao (RMP-NMR). It said Paborada was a human rights defender at-risk.... 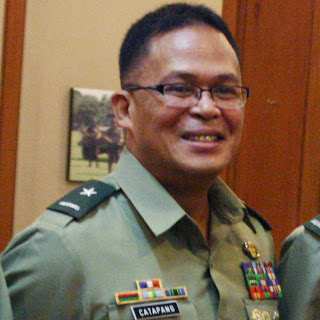 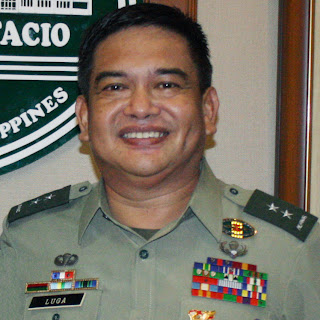 The Army has installed the new commander of the 7th Infantry Division in a simple Change of Command ceremony held at its headquarters in , Nueva Ecija at 9:30am today. Major Harold M Cabunoc, the Army Spokesperson, said that Brigadier General Gregorio Pio P Catapang Jr. has assumed the post of Division Commander, replacing Major General Allan Luga who was earlier installed as Commander of the Command....
http://rangercabunzky.blogspot.com/
Posted by Retired Analyst at 1:20 PM No comments:

Email ThisBlogThis!Share to TwitterShare to FacebookShare to Pinterest
From GMANews (Oct 3): Military operations to deter BIFM efforts against peace efforts

The Armed Forces on Wednesday has adopted “proactive measures” to deter possible attempts by the Bangsamoro Islamic Freedom Movement to sabotage the ongoing peace efforts between the Moro Islamic Liberation Front and the Philippine government. “The proactive measures include the conduct of security patrols in potential [potentially dangerous] areas, intensified intelligence collection and monitoring efforts, networking with other law enforcement agencies, and soliciting support from the populace,” AFP spokesman Col. Arnulfo Marcelo Burgos explained. These measures are to be carried out in coordination with the Philippine National Police, he added....

http://www.gmanetwork.com/news/story/276658/news/regions/military-operations-to-deter-bifm-efforts-against-peace-efforts
Posted by Retired Analyst at 1:11 PM No comments:

Email ThisBlogThis!Share to TwitterShare to FacebookShare to Pinterest
From the Philippine Daily Inquirer (Oct 3): Military hopes for respite soon in decades of warfare

At war for decades, the Armed Forcesof the Philippines sees partial relief for its battle-weary soldiers if the government seals a peace accord with the Moro Islamic Liberation Front.  Military spokesperson Colonel Arnulfo Burgos said Wednesday that an end in the decades-old Moro insurgency in Mindanao would leave the AFP having to deal only with the New People’s Army, the armed wing of the Communist Party of the Philippines. The communist insurgency, which began a few years after the end of World War II, is the longest running in .... Burgos said “it means a lot” that there has not been a single skirmish between soldiers and MILF fighters since January as both sides work in support of the peace process.

http://newsinfo.inquirer.net/282394/military-hopes-for-respite-soon-in-decades-of-warfare
Posted by Retired Analyst at 6:21 AM No comments:

Email ThisBlogThis!Share to TwitterShare to FacebookShare to Pinterest
From the Philippine Star (Oct 3): AFP to boost intel efforts vs. BIFM

The military on Wednesday said it is conducting “proactive measures” to prevent the Bangsamoro Islamic Freedom Movement (BIFM) from conducting atrocities as the peace talks between the government and the Moro Islamic Liberation Front resumes. Armed Forces of the Philippines (AFP) spokesman Col. Arnulfo Burgos, Jr. said the BIFM, which has vowed to sabotage the peace process, remains a concern. “It (BIFM) is still a security concern. We take it seriously. While it is not the most serious threat, we devote efforts on that. What is important is we (implement) proactive measures,” Burgos said.... The military said the BIFM has about 400 members.

Email ThisBlogThis!Share to TwitterShare to FacebookShare to Pinterest
From the Philippine Star (Oct 3): DND concerned about hacking spree against state websites

The Department of National Defense (DND) is concerned about the hacking of government websites and called on the critics of the embattled cybercrime law to raise their concerns through the proper channels. DND spokesman Peter Galvez said the hacking of state websites constitute a threat as it could disrupt the provision of services.... The website of the National Disaster Risk Reduction and Management Council (NDRRMC), which is under the DND, has been hacked twice....

http://www.philstar.com/Article.aspx?articleId=855582&publicationSubCategoryId=200
Posted by Retired Analyst at 6:10 AM No comments:

Bandits snatched a 70-year-old gasoline station owner and her secretary in a daring attack in Libungan, North Cotabato on Tuesday night. Libungan Mayor Manuel dela Cerna, chairman of the municipal peace and order council, said the abductors hauled Annie Datuwata and her secretary named Christabelle to a heavily-tinted van and transported them to a nearby marshland, where a pumpboat was waiting....

Posted by Retired Analyst at 6:01 AM 2 comments:

The Cabuyao Municipal Trial Court issued a warrant of arrest dated August 2, 2012 against labor leader Hermenegildo “Hermie” Marasigan. Marasigan is a member of KMU’s national council and vice-chairman of the the Pagkakaisa ng Manggagawa sa Timog Katagalugan (Pamantik), KMU’s regional chapter. According to a report from Pamantik-KMU, Marasigan is being charged with “direct assault upon a person in authority” and “slight physical injury” during a supposed incident that took place on Oct. 20, 2011 in Barangay Pulo, Cabuyao, Laguna. An official of the Philippine Army is behind the charges; the officer earlier alleged that Marasigan was guilty of “human rights violations” against a soldier....

Email ThisBlogThis!Share to TwitterShare to FacebookShare to Pinterest
From the Philippine Information Agency (Oct 2): No private armed groups in Nueva Vizcaya - PNP

.... Tabian also downplayed the possible threat of the New People’s Army rebels frequenting remote barangays of the province, particularly in the towns of Ambaguio, Villaverde, Alfonso Castaneda, and parts of Bagabag and Solano. “We only have sightings and two armed encounters with the communist rebels from May 1 to September 15. The encounters resulted to the recovery of assorted firearms, other subversive documents and communication equipments,” Tabian said.