Peace talks to be held in The Netherlands

From the Manila Bulletin (Mar 18): Peace talks to be held in The Netherlands


The fourth round of peace talks between the Philippine government (GRP) and the National Democratic Front (NDF) will be held in The Netherlands, not Oslo, Norway from April 1 to 7.
This was confirmed by a member of the GRP Panel, who said that the change in venue was to make sure that Jose Maria Sison, founding chairman of the Communist Party of the Philippines (CPP) and the NDF Peace Panel’s chief political consultant who is ailing would be able to attend the talks.
Sison, 78, has been living in exile in Utrecht, The Netherlands since 1987 and reported to be not in good health.
In fact, during the third round of the peace talks in Rome, Italy last January, Sison fell ill and had to be rushed to the hospital and was not able to attend the last days of the negotiations.
The Manila Bulletin source intimated that Sison may not be able to withstand the rigors of the two-hour flight from Amsterdam to Oslo.

The agreement on a bilateral ceasefire is expected to be on top of the agenda of the Netherland talks, which had been formally proposed by the GRP Peace Panel in Rome.

The creation of a Joint Monitoring Committee (JMC), which will oversee the implementation of a bilateral ceasefire is also expected to be tackled.

Discussions on the Comprehensive Agreement on Socio-Economic Reforms (CASER) will likewise be continued, as well as Political and Constitutional Reforms (PRC).

Both parties agreed to return to the negotiation table after informal talks were held in Utrecht last March 5.

The agreement came after the GRP and NDF terminated their respective unilateral ceasefires last month due to escalating conflicts on the ground. President Duterte was incensed over the brutal slay of four government troops that he ordered peace panel negotiators to pack up and return to the Philippines. The atrocities by NPA rebels against government troops were committed while their unilateral ceasefire was in effect.

Following appeals from various quarters to resume the talks, President Duterte relented after back channeling moves to fulfill a campaign promise to bring peace to the country.

But this time he has set conditions to “ensure that genuine peace talks are realized.”

“I want a ceasefire that is reduced in writing and the parameters clearly shown where we should be going and what we should do if it fails,” the President said.
http://news.mb.com.ph/2017/03/18/peace-talks-to-be-held-in-the-netherlands/
Posted by Retired Analyst at 1:10 AM No comments: 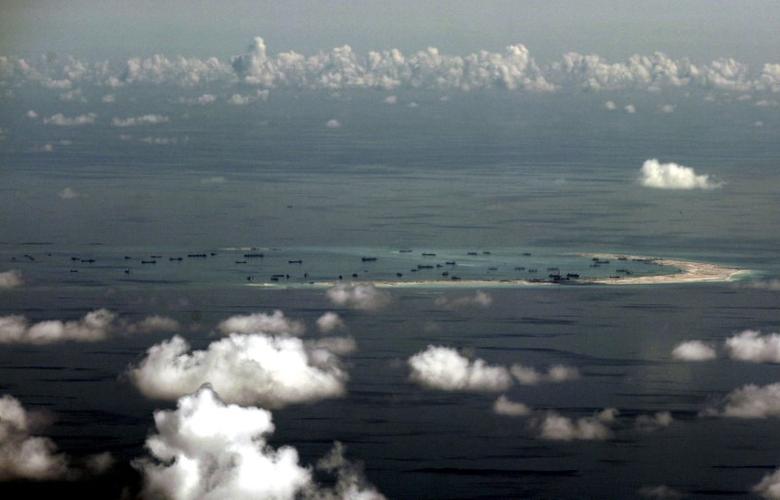 FILE PHOTO - An aerial photo taken though a glass window of a Philippine military plane shows the alleged on-going land reclamation by China on mischief reef in the Spratly Islands in the South China Sea, west of Palawan, Philippines, in this file photo dated May 11, 2015. ... REUTERS/Ritchie B. Tongo/Pool/File Photo

The Philippines said on Friday it would strengthen its military facilities on islands and shoals in the disputed South China Sea and announced initial plans to build a new port and pave an existing rough airstrip.

Defense Minister Delfin Lorenzana had been scheduled to inspect an outpost on Thitu, one of the disputed Spratly Islands, but his trip was canceled because of "safety issues" and he spent the day instead at a military base where he unveiled the development plans.

"We will build a runway and a port, a pier, for our ships" on Thitu, Lorenzana told troops at the Western Command's 41st anniversary. "We are a bit blind in that area."

Thitu is close to Subi Reef, one of seven manmade islands in the Spratlys that China is accused of militarizing with surface-to-air missiles and other armaments.

The Philippines has squabbled with China for years over the South China Sea, but relations appear to have improved under President Rodrigo Duterte, who was scheduled to meet Chinese Vice Premier Wang Yang in Davao City in the southern Philippines on Friday.

The minister said Duterte had given approval to upgrade facilities not only on Thitu but on the eight other features in the South China Sea it occupies.

Defense ministry spokesman Arsenio Andolong said landing on a porous runway on Thitu after heavy rains would have been dangerous.

A senior Philippine general said, however, the military also blocked a planned trip by a group of lawmakers to Thitu on Thursday, more because of concern over how China would react.

"That is a contested area, that is not 100 percent ours," Lieutenant-General Raul del Rosario told a Congressional hearing on Thursday.

"That's why we are concerned if you fly there. Every time an aircraft flies there, it gets a warning and there are times they fire flares towards the aircraft."

A fishing community of about 110 people live on Thitu. China has troops on islands it occupies but not civilians.

China claims most of the South China Sea, a strategic waterway through which about $5 trillion of goods passes each year. Brunei, Malaysia, the Philippines, Taiwan and Vietnam also have claims.

http://www.reuters.com/article/us-philippines-southchinasea-idUSKBN16O0SS
Posted by Retired Analyst at 12:25 AM No comments:

Government troops scored a big victory in the fight against terrorism with the killing of 21 members of the outlawed Bangsamoro Islamic Freedom Fighters (BIFF) in the past few days in Central Mindanao, military officials said on Sunday.

“The deployment of blocking forces proved effective in preventing the terrorists from escaping the mass offensives,” he said in a statement.

The BIFF, which broke away from the Moro Islamic Liberation Front, has pledged allegiance to international terrorist organization Islamic State of Iraq and Syria (ISIS) in 2014.

The recovery from the area of manuals for IED-making indicate that the slain terrorists are giving instructions on how to assemble explosive devices and launch bomb attacks, he said.

The official said the military offensives were directed against the group of Muhammad Ali Bin Abdulrahman, alias Muawiyah, a foreign terrorist; Salahuddin Hassan, a local terrorist and bomber trained by the latter; and Esmael Abdulmalik, alias Abu Toraype, the Dawlah Islamiyah Maguindanao founder and a BIFF brigade commander.

“Validations are being made on the ground on persistent reports that these terrorist (leaders) were killed in the well-planned, well-coordinated and well-executed massive air and ground operations,” de la Vega said.

He said those killed in the military operations were also “cohorts” of slain Malaysian terror suspect Zulkifli bin Hir, alias Marwan, who was killed by members of the elite Special Action Forces of the Philippine National Police in January 2016 in Maguindanao.

"With the recent successful operations, the AFP (Armed Forces of the Philippines) has dealt a severe blow on the reported ISIS cell in Central Mindanao. We are also confident that their bomb making capability was seriously degraded if not negated," Galvez said.