PH military caught in a bind as VFA termination pushed

From the Philippine Daily Inquirer (Jan 28, 2020): PH military caught in a bind as VFA termination pushed (By: Frances Mangosing) 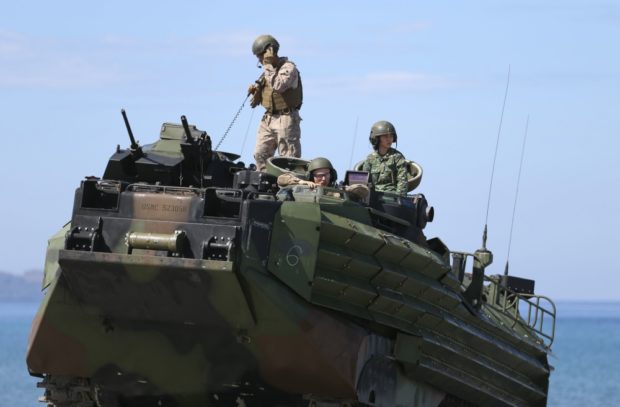 Philippine, US Marines train for the annual Balikatan exercises in San Antonio, Zambales on April 23, 2019. /US MARINES/ DVIDSHUB

The Philippine defense establishment has found itself in a tight spot after President Rodrigo Duterte declared he would terminate the Visiting Forces Agreement (VFA) between the Philippines and United States in retaliation for the revocation of the US visa of one of his closest allies, Sen. Ronald “Bato” Dela Rosa.

It was not the first time, however, that Duterte threatened to sever ties with the US, a long-time ally and former colonizer, and perhaps currently one of the Philippines’ most important security partners.

The two countries had weathered Duterte’s temper flares and his rant against the decades-old alliance since rising to power in 2016, which has put in a precarious situation the Philippines’ highest ranking civilian defense official, defense chief Delfin Lorenzana, who has had long experience dealing with the US.

In a carefully worded statement on Duterte’s latest rant against the Philippines’ defense partnership with the US, Lorenzana acknowledged that, indeed, the Philippines may “unilaterally” initiate the process of terminating VFA.

He said it is “well within the right of the Philippine government to do so if it determines that the agreement no longer redounds to our national interest.”

While he did not elaborate on the impact on the Philippines of scrapping the VFA, Lorenzana said he would discuss with the President “various scenarios” if the pact was terminated.

On Monday (Jan. 27), the Philippine Department of Justice (DOJ) is set to submit its study on the process needed to terminate the VFA.

The latest rant of Duterte directed at the US came last week after Dela Rosa said he found that his multiple entry visa to the United States had been cancelled.

There was no official reason given but it was likely because of his role in the Duterte administration’s bloody campaign against drugs, which had killed thousands of suspects and raised questions about human rights.

The cancellation of Dela Rosa’s visa was also perceived as an effect of the Global Magnitsky Act of the US which imposes sanctions on human rights violators.

“I’m warning you. This is the first time,” an angry Duterte said in a speech on Thursday. “If you do not correct that, I will terminate the basis of Visiting Forces Agreement,” he said.

The next day, the President’s interview with Russian government television network RT, which had been taped a week before, aired on social media.

Duterte lavishly praised Russia and China in some parts of the interview, saying bluntly why he would rather pursue stronger relations with the two countries instead of the US.

“America continues to look at us as a vassal state because we were under the Americans for 50 years,” said Duterte in that interview.

“I cannot get a credible posture from the Americans, I can get it from the Russians and China. It’s because they respect the sovereignty of the country, which America is totally, totally lacking,” he said.

Endgame
Viewing the President’s recent foreign policy statements in its totality, some security analysts see the latest rant targeting the VFA as an endgame for pivoting away from the US.

They say Dela Rosa’s visa woe was just a convenient excuse for Duterte to push for what he had wanted all along—a dramatic shift in alliances from the US to the United States’ biggest rivals in the world stage, Russia and China.

Since he came to power in 2016, the President was very vocal about his lack of faith in the United States and his desire to pivot to China and Russia.

Observers, though, see a VFA-less Philippines to ultimately benefit China, which has claimed virtually the entire West Philippine Sea as its territory and which the US sees as a strategic rival and military threat.

One of China’s demands in the ongoing negotiations for a Code of Conduct in the South China Sea is that parties involved do not hold military exercises in the disputed waters with countries outside the region unless concerned parties had been notified and did not object.

Military analyst Jose Custodio said the VFA, which was ratified in 1999, was a result of China’s occupation of Mischief (Panganiban) Reef in mid 1990s after Philippine senators in 1991 voted against the extended presence of US forces in Subic, once the largest military naval base in Asia.

“When the Chinese saw the Philippines had weakened, they started moving in to Mischief Reef,” said Custodio.

“As a response to that, we have the VFA. The existence of the VFA was triggered by the Chinese,” he said in an interview with ANC on Saturday. “Now he wants it basically scrapped,” Custodio said, referring to Duterte.

Mischief Reef is within the Philippines’ 200-nautical mile exclusive economic zone (EEZ) in the West Philippine Sea, which China in recent years had transformed into a massive military outpost with harbors, airstrips and other facilities.

The same 2016 ruling that invalidated China’s “historic rights” over the disputed waters, was put in the back burner by Duterte, as he pursued warmer ties and solicited economic investments from China.

The US is not a claimant in the South China Sea, but would not want complete Chinese control of sea lanes in the area. The US regularly deploys air force and navy assets to surveil the disputed waters.
‘VFA essential to Mutual Defense Treaty’

Malacanang said on Sunday that the possible termination of the VFA would not affect the other existing defense agreements with the US.

“It’s only the VFA that will be terminated. So there is nothing to speculate about our alliance with the US… The alliance will remain the same,” presidential spokesperson Salvador Panelo said in an interview over DZIQ.

The VFA governs the guidelines for visiting American troops in the Philippines. It covers the policies on visa regulations and jurisdiction over crimes committed by US military personnel.

The agreement is also the foundation for the US military to stage large-scale joint exercises with counterparts in the Philippines, such as the Balikatan, Maritime Training Activity Sama-Sama and Kamandag — trainings that further strengthen the interoperability of the two militaries in the face of rising domestic and regional security threats.

The VFA has also allowed American troops to help the Philippines fight Islamic militants during the Marawi siege in 2017, the country’s longest urban war in recent years and the biggest security crisis that ever confronted the Duterte administration.

The US has also conducted humanitarian and civic missions across the Philippines and is a force multiplier and immediate responder during disasters and calamities.

The VFA is seen as a reaffirmation of the obligations of the Philippines and US under the 1951 Mutual Defense Treaty, which mandates both countries to support each other in case of an external aggression.

“The thing is, the VFA had to correct the problem of the situation where we had no governing treaty regarding US military personnel,” Custodio said in the same ANC interview.

“It governs the presence of foreign troops, so you don’t keep trying to figure out how do you legally justify foreign troops (in the country),” he said.

Former Foreign Affairs Secretary Albert del Rosario said that while the VFA may be “imperfect,” it is an “essential agreement in effectively implementing the MDT.”

“Without the VFA, making the MDT working would be more challenging, especially since we now have specific external threats as well as more devastating natural calamities,” he said in a statement.

He said Duterte should instead accept President Donald Trump’s invitation to the US and take the opportunity to discuss about improving the MDT and VFA.

Meanwhile, opposition lawmakers led by Bayan Muna Rep. Carlos Zarate, who see the agreement as “onerous and violative” of the country’s national sovereignty, said that the VFA should be scrapped for the right reasons and not “as a bargaining chip for personal gain.”
PH military to bear the brunt

The Philippines and US have survived challenges in their alliance in recent years. Ties have remained robust and the militaries of both countries have even agreed to step up engagements in 2020.

It is the Armed Forces of the Philippines that will ultimately bear the brunt of scrapping the VFA. Some of their former colleagues are watching how the military leaders are currently walking the tight rope that stretches in the middle of an angry Duterte and a long-time security ally.

It remains to be seen whether the defense and military establishments would let the VFA collapse in exchange for a single person’s US visa.

One retired general pointed out that most of the military and police top brass had been appointed by affinity or had previously served in Davao, the home province of Duterte.

“Normally, defense and security advisers are there to provide information and balanced advice… Will they rise above a crisis and provide their principal a principled advice or kowtow to the whims and caprices of their patron?” said the retired general, who has been closely monitoring the developments on the issue.

“In Cabinet circles, they call President Duterte as ‘mayor.’ Does that make the uniformed services his ‘barangay tanods’?” the retired officer said, using the Filipino term for village watchmen.