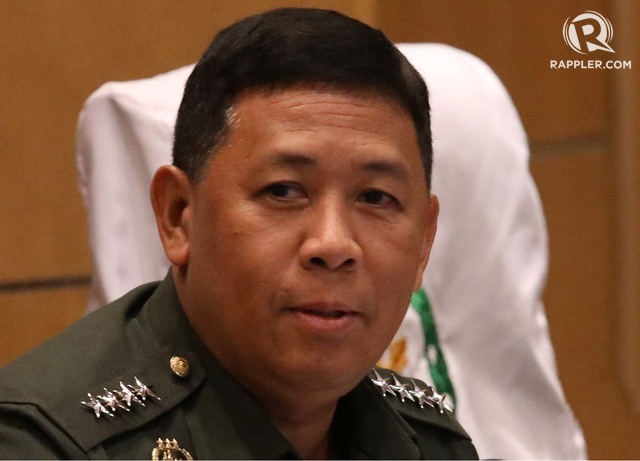 The deal allows Dito to set up communication facilities in "military camps and installations," which the AFP later clarified to mean towers and relay stations "not necessarily within military camps."

Madrigal said Dito's facilities would be "separate" from the AFP's communication lines, and the military leadership practiced "due diligence" in ruling out security threats that could arise from the agreement.

"Other than due diligence, good faith," the military chief added, emphasizing that Dito was selected through a public bidding, and it has since been licensed by the National Telecommunications Commission.

Defense Secretary Delfin Lorenzana earlier said he was unaware of the deal at the time it was signed because he was traveling abroad, and that he would "carefully scrutinize" it before giving his approval.

Still out of the country, Lorenzana said he would be back in Manila on Friday, September 20.

Madrigal denied accusations that Lorenzana was "left in the dark" or bypassed when he signed the deal, saying he followed the standard procedure of handling and initially approving such agreements before handing it over to the defense chief.

Senator Risa Hontiveros on Tuesday filed a resolution calling for an investigation into the agreement. She questioned how the deal could have been made without Lorenzana's knowledge or approval.

Senate President Pro-Tempore Ralph Recto called the deal "an electronic Trojan Horse into our camps" that was done "stealthily." He said it should have gone through "a third party expert study."

Senator Francis Pangilinan pointed out that China's 2014 Counter-espionage Law and 2017 National Intelligence Law give the Chinese government license to compel Dito Telecommunity to hand over any information it may obtain through its operations on Philippine military installations.

"Actually, all systems are vulnerable, not just to China but to any other country, depending on their capability to get into the said systems. So it's up to us to be able to ensure that we're able to protect our facility,” Madrigal said in a mix of English and Filipino.

China disputes the Philippines' sovereignty and sovereign rights in the West Philippine Sea, as it seeks a joint oil and gas exploration deal with the Duterte administration.

China has reclaimed 7 reefs in the West Philippine Sea and turned them into military bases, some equipped with missile facilities.

Defending the deal, Dito pointed out the partial foreign ownership of the Philippines' other telcos: Globe Telecom by Singapore's Singtel, and Smart Communications by Japan's NTT. However, Singapore and Japan do not have any territorial dispute with the Philippines, and are in fact its allies.

It would be unfair if the AFP denied Dito a deal similar to what it already has with Globe and Smart, Madrigal said, adding that Lorenzana or any other higher authority may reject it if they find that it threatens national security.

Madrigal is set to retire from military service on September 28.