'I am very confident of the abilities of our soldiers to do the job,' says the country's defense chief 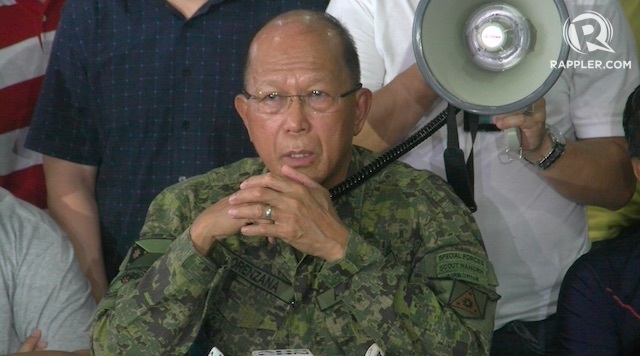 Defense Secretary and Marawi rehab chief Delfin Lorenzana on Wednesday, September 27, told a room full of legislators and government officials from Mindanao that he was “confident” that the military will be able to fulfill its pronouncement that the war in Marawi City will be done by the end of the month.

“I am very confident of the abilities of our soldiers to do the job,” said Lorenzana in a chance interview after the hearing, when asked if he was sure that the military can wrap up operations in the war-torn city by Saturday, September 30 – or within 3 days.

“That’s what the troops on the ground who told me, so I trust them,” added the defense chief, himself a military veteran who spent many years in Mindanao. (READ: Marawi battle zone: Urban warfare challenges PH military)

Mid-September, the military announced that they had penetrated a “major defensive position” of the Maute Group in Marawi City, which the ISIS-inspired terrorists tried to take control of back in late May 2017. Fighting has raged on non-stop since then, and martial law is still in place over the entire island of Mindanao.

“We are still incurring some casualties,” said Lorenzana, who said that just the other day, at least one soldier died as troops chip away the remaining areas being controled by the Maute Group.

“Ganoon katindi ang kalaban natin. Naiipit na sila, nakakapatay pa rin (The enemies are that good. They are already trapped and yet they still manage to kill),” he noted.

It’s not the first time that the military or Lorenzana, for that matter, promised a deadline for the conflict in the city. In the days immediately after the local terror group invaded the city, Lorenzana said it would be over in a matter of weeks.

The fighting has raged on for a little over 4 months.

As Marawi rehab chief, Lorenzana also briefed the House committee on Muslim affairs of the current situation in Marawi, as well as their rehabilitation plans. The task force, which he heads, has yet to come up with a timeline for Marawi’s rehabilitation.

Lorenzana explained that they will first have to finish the conflict in Marawi before it moves on to a post-conflict needs assesment. The assesment will determine which structures need to be demolishes completely or which ones will just be repaired. This will take a week or two, according to Lorenzana.

The budget department had earlier said it would release P5 billion to rehabilitate Marawi City for 2017 alone. Of those funds, Lorenzana said, only P122 million remains without allocations for rehabilitation. The rest have been earmarked for housing needs, as well as the needs of those displaced by the war.

The P122 million, said Lorenzana, can be used later on for the task force’s rehabilitation efforts.

https://www.rappler.com/nation/183568-marawi-deadline-lorenzana-september-30
Posted by Retired Analyst at 6:29 AM