If the two Moro separatist groups choose to foster ties with the Abu Sayyaf, President Duterte won't have high hopes for the Mindanao peace process 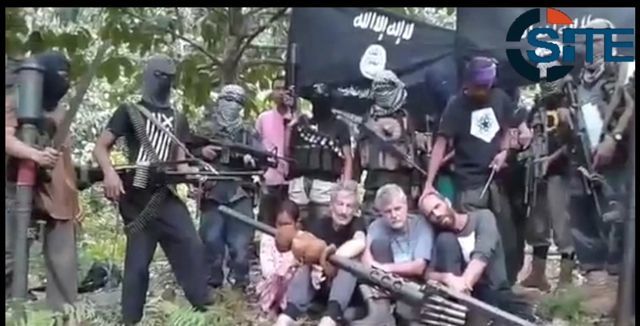 TERROR GROUP. Members of the Abu Sayyaf pose with hostages, two of whom they have already killed.

If Moro separatist groups are sincere in their willingness to cooperate with the Duterte administration in the peace process, they should cut all ties with the terrorist group Abu Sayyaf.


This was President Rodrigo Duterte’s pronouncement on Tuesday, July 26, during a speech before around 500 soldiers in Fort Magsaysay, Nueva Ecija.
“Gusto ko marinig MI(LF) at MN(LF), ‘yang Abu Sayyaf na ‘yan, wala na connection sa kanila,” said Duterte.
(I want to hear the Moro Islamic Liberation Front and Moro National Liberation Front say that they no longer have a connection to the Abu Sayyaf.)
The Abu Sayyaf is a terrorist group operating in Mindanao that began as a breakaway group of Moro separatist groups. But while espousing religious fervor in their terror acts, they have been regarded by Philippine administrations as bandits responsible for kidnap-for-ransom, bank robberies, and other crimes.
Just last July 18, five Malaysian sailors were reportedly kidnapped by the group.
The connection of Moro separatist groups to terrorists has endangered the Bangsamoro Basic Law (BBL), legislation meant to give a new Bangsamoro region more autonomy and powers.
In January 2015, the pursuit of top terrorists led to the deadly Mamasapano clash that killed 44 Special Action Forces troopers, 23 Moro rebels, and at least 7 civilians.
Duterte believes there are Abu Sayyaf sympathizers among Moro separatist groups. If the MILF or MNLF foster such a relationship, the new Bangsamoro Basic Law to be drafted may not get far.
“‘Pag ayaw nila bitawan o naka-connect pa rin sila sa Abu Sayyaf (If they don't want to let them go or they are still connected with the Abu Sayyaf), I don’t think there will be significant result,” said Duterte.
Last Thursday, July 21, Duterte called the Abu Sayyaf “criminals” who have “killed people unnecessarily.” (READ: Duterte pleads for peace in Mindanao, even with Abu Sayyaf)
This was a change in tune from a previous statement he gave, saying he did not include the terrorist group in his definition of criminality because they were driven to their situation by “desperation.”
In line with Duterte’s determination to bring peace and development to Mindanao, he has approved the Peace Roadmap proposed by Presidential Adviser on the Peace Process Jesus Dureza.
In the roadmap, the Philippine government commits to implementing agreements it has signed with the MILF.
It also commits to the crafting of a new law to replace the failed BBL, but will still based on the historic Comprehensive Agreement on the Bangsamoro.
http://www.rappler.com/nation/141009-duterte-milf-mnlf-cut-ties-abu-sayyaf
Posted by Retired Analyst at 9:01 PM