Army Maj. Gen. Corleto Vinluan, commander of the 11th Infantry Division in Sulu, said the militant – whom he identified as Darwin Sahiron alias Vikram - was slain late Saturday after a running gun battle with soldiers in Talipao town’s Bilaan village. 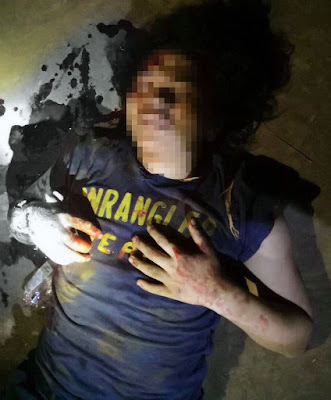 Military photos show the body of the slain Abu Sayyaf bomb expert Darwin Sahiron implicated in the spate of suicide bombings in Sulu province. And when he was alive.

He said Vikram was also the grandson of a senior Abu Sayyaf leader, Radulan Sahiron, and behind the spate of attacks on military targets and among those who killed 11 soldiers in Friday’s fierce clashes in Patikul town where 14 infantrymen were wounded.

Vinluan said soldiers from the anti-terror Joint Task Force Sulu were dispatched after they received intelligence on the presence of 2 Abu Sayyaf militants on a motorcycle in Bilaan village. Soldiers spotted the terrorists and pursued them, sparking a firefight and eventually killing one of them.

The other gunman, he said, managed to escape and leaving the body of his companion which was later identified as the notorious bomb expert. “Vikram is an IED maker and involved during the Jolo Cathedral and 1st Brigade Combat Team bombings. He was also involved in the Friday encounter with the 21st Infantry Battalion (in Danag village),” said Vinluan, who is also the task force commander.

In September last year, a man blew herself up near an army checkpoint just outside the camp of the 35th Infantry Battalion in the village of Kajatian in Indanan town. No soldiers were killed or wounded in the powerful blast, but the explosion obliterated the bomber.

It was the second suicide attack in the village targeting army camps after 2 Abu Sayyaf militants blew themselves at the tactical command post of the 1st Brigade Combat Team and killed eight people and wounded 22 others which was eventually claimed by ISIS.

And in January last year, an Indonesian ISIS couple simultaneously detonated their explosives belt inside and outside the Our Lady of Mount Carmel Cathedral in Jolo town and killing over 2 dozen mostly soldiers deployed at the church. All the suicide bombings occurred despite an extended martial rule in the troubled region where security forces are battling Filipino and foreign Islamic extremists.

Vinluan said the body of the slain terrorist was taken to the military base in the capital town of Jolo, adding, security forces were pursuing the Abu Sayyaf group in Sulu, one of 5 provinces under the restive Muslim autonomous region.

“This successful operation proves that the direct involvement of the communities would put up pressure on the Abu Sayyafs and constrict their movements as well. May you continue to feed us with reliable information as we beef up our operations to run down terror groups and end discord and instability in our area of operation,” he said. (Zamboanga Post)

https://mindanaoexaminernewspaper.blogspot.com/2020/04/troops-kill-sayyaf-bomb-expert-linked.html
Posted by Retired Analyst at 9:15 AM