'We believe there is nothing to be alarmed about in this natural reaction of the AFP to prepare and deploy when it becomes necessary,' says military spokesperson, Brigadier General Edgard Arevalo 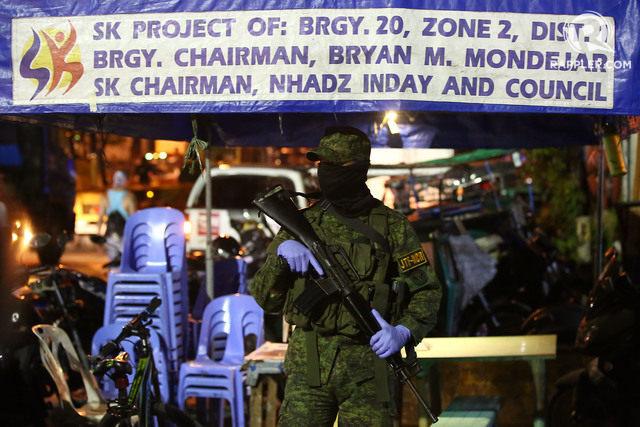 LOCKDOWN. Members of the Manila Police District and Armed Forces of the Philippines join barangay officials as they enforce a strict 24-hour lockdown of Barangay 20 at the Parola Compound in Tondo, Manila on April 14, 2020. File photo by Ben Nabong/Rappler

The Armed Forces of the Philippines (AFP) said it is only natural for the military to prepare for a possible “martial law-like lockdown” after President Rodrigo Duterte threatened to enforce it.

On Sunday, April 19, AFP spokesperson Brigadier General Edgard Arevalo confirmed the issuance of a Philippine Air Force (PAF) internal memo advising troops to “prepare for strict implementation of extensive enhanced community quarantine where the AFP will be the overall in-charge along roads and highways.”

But he clarified Duterte has yet to issue any final deployment order.

“Sa ngayon wala pa na namang utos ang Pangulo na mag-deploy na (Right now, there's no order from the President to deploy). But it is incumbent and customary on the part of the leadership of the Philippine Air Force, and the AFP under General Felimon Santos Jr, for that matter, to exercise its initiative of alerting and preparing our personnel including ROE (rules of engagement),” Arevalo said in a statement.

“We believe there is nothing to be alarmed about in this natural reaction of the AFP to prepare and deploy when it becomes necessary,” he added.

Arevalo said that the military is making the necessary preparations for now after the commander-in-chief threatened to impose a military and police takeover should Filipinos continue to violate the rules of the lockdown in Luzon and other parts of the country.

In a separate statement, PAF spokesperson, Major Aristides Galang, said that the internal memo was issued so the PAF could “anticipate” any scenarios following Duterte’s warning.

“It is an internal memo for the PAF personnel po... The PAF is just anticipating of any scenarios in case the President as commander-in-chief of the AFP would decide to implement his statements lately to the public as earlier stated and prepare our troops in advance,” Galang said.

On Sunday, Arevalo said that the public should be more worried over residents’ continued violation of the enhanced community quarantine rules.

“What we should all be alarmed about instead is the fact that a lot of people are blatantly violating the law and disobeying the rules and health protocols which MUST be strictly enforced – otherwise people die,” Arevalo said.

“Law abiding citizens and those who follow the rules should not worry. There is no reason to be alarmed,” he added.

Arevalo said that the military has long been assisting local government units in Quezon City, Pasay City, Parañaque City, Mandaluyong City, and Pateros in enforcing the rules of the lockdown imposed due to COVID-19 even before the President’s pronouncement.

“Almost all barangays in the NCR (National Capital Region) were actually seeking the assistance of the military and the police which shows the magnitude of the problem,” Arevalo said.

The military has been helping the police guard checkpoints since the lockdown of Luzon began on March 17. Both uniformed services have also been put in charge of several major national quarantine facilities.

The AFP has also been using its trucks, planes, and vessels to transport medical equipment, supplies, and relief goods.

The lockdown in Luzon is set to end by April 30 after the Duterte decided to extend it due to the surge in COVID-19 cases.

https://www.rappler.com/nation/258386-natural-reaction-afp-prepare-possible-martial-law-like-lockdown-coronavirus
Posted by Retired Analyst at 11:12 AM