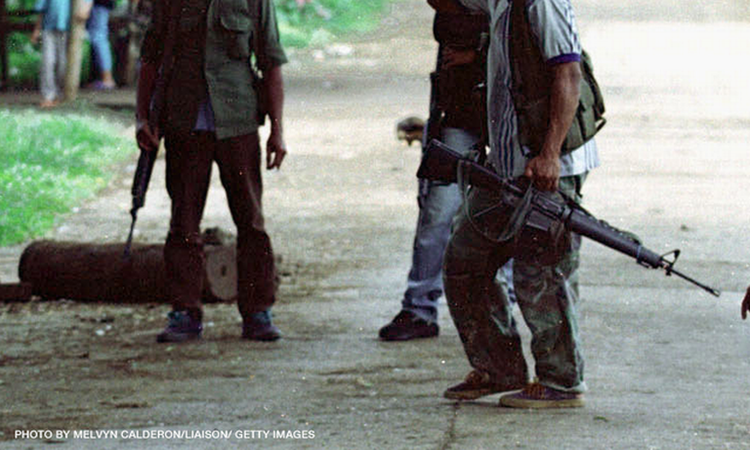 After receiving a tip from a highly-placed source, troops of the Joint Task Force Sulu conducted a pursuit operation to intercept two members of the ASG, who were riding a motorcycle in Barangay Bilaan in Talipao at night of April 18.

"Nag-ano kasi sila, nag-scamper sila. They reduced their grupo nila into splintered group[s] para hindi madaling ma-detect. Eh, cordoned na natin 'yung area — plus, the support of the locals — madali na natin silang mahuli kung sakali[ng] lalabas man sila," Armed Forces of the Philippines - Western Mindanao Command Chief Lt. Gen. Cirilito Sobejana said. [Translation: They were rushing off. They split their group to avoid being caught easily; but we had already cordoned off the area, and we had support from the local residents. We could easily track them whenever they attempt to flee from the area.]

In the middle of the operation, the soldiers recovered the remains of the grandson of the ASG top official in a site in Barangay Lambana.

"He was also involved in the encounter with the 21st Infantry Battalion," Vinluan added.

AFP WesMinCom Spokesperson Major Arvin Encinas said the remains were identified to be Vikram's after a concerned citizen reported that the grandson of Sahiron was in the area.

His family claimed his remains on Sunday morning.

Meanwhile, none of the soldiers were harmed during the operation.

"Our brave soldiers fought for their lives to secure peace and order in the province of Sulu. We will pursue their commitment and bring more meaning for their contributions to attain lasting peace," Vinluan said.

"Then again, this successful operation proves that the direct involvement of the communities would put up pressure on the Abus, and constrict their movements as well," Sobejana likewise stated.

He assured that they will stay true to their pledge of eliminating the Abu Sayyaf, who has put the image of Sulu at stake, and has been nothing but a "threat to the people in the province."

He noted that the WesMinCom has a "front" or dedicated soldiers for its fight against the terrorists, and that its pursuit operations are continuous. He added that they consistently reassess their concept of operations (conops), and "restrategize based on the current doctrines of the Abu Sayyaf," as the ASG is also "evolving."

The Abu Sayyaf in Sulu are now less than 200, according to Sobejana.
The late Vikram, or Darwin Sahiron, was one of the makers of explosives in the Headquarters of the 1st Brigade Combat Team bombing; and the Jolo Cathedral bombing in Sulu — the suicide bombing that was carried out by an Indonesian couple — in 2019. Vikram was also involved in numerous encounters in Patikul in Sulu, including the clash with the 21st Infantry Battalion on April 17 of this year.

Radullan Sahiron, grandfather of Vikram and leader of the ASG, had taken command of the organization in September 2006, after the death of the former head Khadaffy Janjalani.

He was involved in the 2001 Dos Palmas kidnapping of three U.S. citizens, which included 17 Filipinos from a resort in Palawan. Several hostages in the incident had been killed.

Since Sahiron assumed his leadership position in the ASG, the U.S. considered him to be a threat not only to the U.S. and Filipino citizens, but also to their interests.

The Abu Sayyaf leader lost his right hand while fighting security forces in the 1970s, which earned him the name "Commander Putol." He is believed to be hiding in Southern Mindanao, as he continues to plot terrorist attacks that are harmful to the lives of many.

https://www.cnnphilippines.com/news/2020/4/19/abu-sayyaf-group-kin-killed-operations-sulu-military.html
Posted by Retired Analyst at 9:45 AM