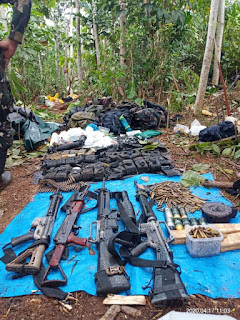 NSFA, Panacan, Davao City - "Let us ensure that the implementation of the Social Amelioration Program (SAP) in Geographically Isolated and Disadvantaged Areas (GIDAs) will not be hampered and shall reach its intended recipients. Let us not be deceived by the Communist Terrorist Group's treacherous ceasefire declaration."This was the directive of MGen. Jose C. Faustino Jr., Commander of Eastern Mindanao Command after different units conducting security operations relative to the implementation of the SAP figured in different encounters over the previous days.

Early morning of April 17, 2020, at about 6:35 AM, elements from the 3rd Special Forces Battalion encountered about 30 New People’s Army in Sitio Mikit, San Martin Propseridad, Agusan del Sur while they were conducting a security patrol for the MSWD personnel of the said municipality. Prior reports stated that the members of the same group of NPA were planning to extort from the recipients of SAP.

The 30-minute skirmish resulted in the recovery of one AK-47 rifle, two M16-A1 Rifles with an M203 grenade launcher, one M653 rifle, 10 backpacks, 5 bandoleers with ammunition, and a commercial radio left by the NPAs after they scampered to different directions.

There were no reported casualties on the government side while bloodstains from an undetermined number of wounded NPAs were seen from the encounter site.

Pursuing troops from the same unit reencountered the fleeing NPAs in Barangay Campawan, Baganga, Davao Oriental 9:30 in the morning of April 17, 2020. The running gun battle led to the capture of one AK 47 rifle and one M4 assault rifle left by the scampering NPAs.