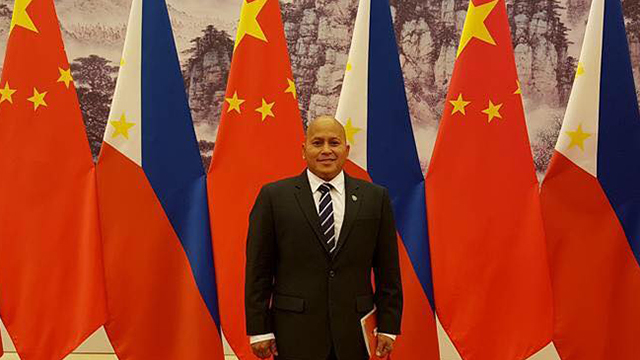 As the Philippines “charts another way” when it comes to its foreign policy and its dealings with the United States, the Philippine National Police (PNP) is poised to forge even closer ties with its counterparts from the People’s Republic of China.

“Going towards that direction” was how Dela Rosa described the sort of relationship the Philippine is eyeing with Chinese law enforcers, if compared to its existing relationship with the United States.
The United States, through different law enforcement and intelligence agencies has close ties with the PNP – offering equipment, training, and most importantly, intelligence with their Filipino counterparts. The Philippine military enjoys the same relationship with its American counterparts.

But President Rodrigo Duterte recently announced his “separation” from the Western superpower both in military and economic aspects. The newly-elected president later clarified that “separation” doesn’t mean the severance of ties but a “separation of my foreign policy.”

Dela Rosa was part of the Philippine contingent during Duterte’s days-long visit to China. The PNP chief said they asked Chinese police for an “intelligence exchange,” particularly when it comes to monitoring narcotics activities between the Philippines and China.

“Ang masasabi ko lang sa inyo na equipment na puwede ninyong malaman, armored vest. Yung iba, di ko puwedeng sabihin dahil malalaman ng kalaban ang capability namin kung gaano na pala kami kagaling mag-monitor sa kanila,” he added. (What I can tell you is that we were given armored vests. The others, I can’t tell you because our enemies will know our capability when it comes to monitoring them.)

Police officials from Fujian province, said Dela Rosa, are set to visit the Philippines in a week’s time to talk to local officials about the importation of illegal drugs from the southeastern Chinese province.

Dela Rosa noted that the Chinese province's proximity to several provinces in Luzon make the Philippines a prime target for would-be drug lords from Fujian.

Duterte’s recent pronouncements and apparent “pivot” to China has sent shockwaves all around the country. The Philippines’ renewed relationship with China comes months after it won a historic case on the South China Sea (West Philippine Sea).

http://www.rappler.com/nation/150283-pnp-china-illegal-drugs-equipment
Posted by Retired Analyst at 6:28 AM