From The Diplomat (May 18, 2020): Assessing China’s Assertiveness at Commodore Reef (By Christian Vicedo)

Implications for the future of international law and good order at sea in the South China Sea. 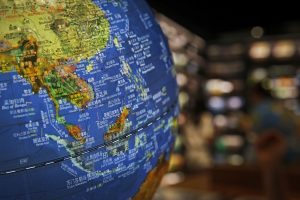 In this July 13, 2018, photo, people read books near a globe showing the southeast countries on the South China Sea with nine-dash line claims under Chinese territory on display at a bookstore in Beijing.Credit: AP Photo/Andy Wong
The incident earlier this year between Philippine and Chinese naval vessels near Commodore Reef foreshadows dynamics that might characterize regional maritime security in the face of an increasingly assertive China. In this regard, it is essential to reexamine the incident through the lens of international law and good order at sea to understand its implications.

On February 17, 2020, the Philippine Navy corvette BRP Conrado Yap (PS-39) conducted a patrol mission near the Philippine-occupied Commodore Reef in the South China Sea (SCS). During the mission, it encountered a PLA Navy (PLAN) corvette with hull number 514. PS-39 radioed the Chinese Navy Ship (CNS)-514, which responded with the following statement: “The Chinese government has indisputable sovereignty over the SCS, its islands and its adjacent waters.” Subsequently, PS-39 instructed the CNS-514 to proceed directly to its next destination but the Chinese vessel simply repeated its earlier response and maintained its course and speed.

In an interview, an official of the Armed Forces of the Philippines Western Command (AFP-WESCOM) noted that PS-39’s crew visually observed that the gun control director of the CNS-514 was being aimed at their ship. The AFP-WESCOM official explained that the “gun control director can be used to designate and track targets and make all the main guns ready to fire in under a second.” He also argued that the visual identification confirmed the “hostile intent” of the Chinese vessel.

In international reports regarding the incident, the gun control director has been referred to as a fire control radar. This makes sense since in modern fire control systems, the gun director, which performs trigonometric solutions for firing on the target, and the radar, which provides information on the location of the target, are often combined as one component of the fire control system, as in the case of SAAB’s Ceros 200 and Thales’ LIROD Mk2. If the CNS-514 in question is the Chinese Navy Ship Liupanshui, which bears the same hull number, then it is a Type 056A Jiangdao class corvette equipped with a Type LR66 fire control radar and Type IR 17 optronics to guide its weapons system.

It must be noted that Commodore Reef may legally be considered a rock following the 2016 Arbitral Award on the Philippine case versus China. In this regard, Commodore Reef is only capable of generating territorial waters. At the same time, Commodore Reef is also situated within the Philippine Exclusive Economic Zone (EEZ). In this regard, depending on the distance of the exact location of the incident from Commodore Reef, one of two possible navigational regimes may apply. In the territorial sea-scenario, the CNS-514 is only legally entitled to exercise its right to innocent passage guaranteed by the Law of the Sea Convention (LOSC). Under the law, PS-39 may take necessary steps to “prevent passage which is not innocent,” one that is prejudicial to the country’s “peace, good order, or security.” In this regard, PS-39’s instruction to the CNS-514 to “proceed to its next destination” is within its rights as a coastal state. As per the LOSC, CNS-514 should have also proceeded in a “continuous and expeditious” manner and refrained from employing the threat of use of force.

In the EEZ-scenario, CNS-514 should have simply asserted its exercise of freedom of navigation rather than China’s “indisputably sovereignty.” In this scenario, the freedom of navigation cannot be suspended by PS-39 since the EEZ is likewise considered to be part of international waters in which a flag state exercises “high seas freedoms.” However, it must be underscored that as per LOSC, the high seas and EEZs are to be reserved for peaceful purposes. This means that the use of force or threat of use of force is still discouraged. Consequently, the next relevant question is whether CNS-514’s aiming of its fire control radar on PS-39 constituted a threat of use of force or manifested hostile intent.

The Commodore Reef Incident and Good Order at Sea

The actions of CNS-514 also contradicted principles set forth in multilateral arrangements for good order and peaceful management of disputes in the SCS which China has proclaimed to support. It must be recalled that under the 2002 ASEAN-China Declaration on the Conduct of Parties in the SCS, the parties undertook to “resolve their territorial and jurisdictional disputes by peaceful means, without resorting to the threat or use of force” and in accordance with LOSC. Relatedly, the parties undertook to “exercise self-restraint in the conduct of activities that would complicate or escalate disputes and affect peace and stability.”

In addition to expressing its intention to apply the Code for Unplanned Encounters at Sea (CUES) in the SCS during the 19th China-ASEAN Summit in 2016, China also agreed with other ASEAN-Plus countries in subscribing to CUES during the 5th ASEAN Defence Ministers’ Meeting (ADMM)-Plus in 2018. It must be understood that as a standardized protocol, CUES carries both operational and political significance as it was adopted during the Western Pacific Naval Symposium (WPNS) organized by China in 2014. Interestingly, however, the actions of the CNS-514 contradicted CUES with respect to the use of fire control radar. Under CUES, as an “assurance measure for naval ships,” the commanding officers need to “consider the potential ramifications before engaging in actions that could be misinterpreted.” It specifies that the “actions the prudent commander might generally avoid” include “simulation of attacks by aiming guns, missiles, fire control radars, torpedo tubes or other weapons in the direction of vessels or aircraft encountered.” Clearly, the actions of CNS-514 are incompatible with CUES.

The future of international law and good order at sea arguably holds dim prospects when the most powerful and influential coastal state of the SCS complies with neither international law nor the rules set forth by multilateral maritime security arrangements to which it is a party. In the absence of a multilateral security arrangement that can proactively protect the rules-based order and deter assertiveness in the SCS, China might continue to proclaim respect for international law and express support for good order at sea while behaving within a completely different paradigm during unplanned encounters. Likewise, China might expand its gray zone coercion activities and push the envelope of near-armed attack scenarios to impose its territorial and maritime claims on its small power neighbors. Moreover, China might continue to intimidate its small power neighbors while dismissing diplomatic protests and other legal remedies as false accusations, provocations, and unacceptable international judgments as it previously did with respect to the aforementioned Commodore Reef incident, the Scarborough Shoal Stand-Off of 2012, and with the 2016 Arbitral Award on the Philippine case versus China.

[Christian Vicedo is a security analyst based in Manila. His writings have appeared in Pacific Forum PacNet, East Asia Forum, and The Diplomat.[

https://thediplomat.com/2020/05/assessing-chinas-assertiveness-at-commodore-reef/
Posted by Retired Analyst at 6:56 AM