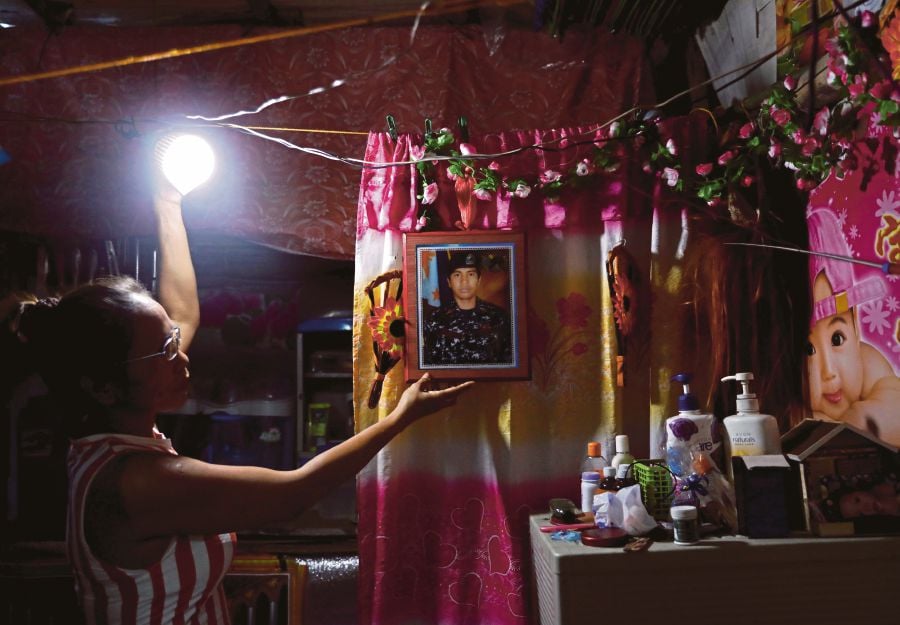 A woman showing a picture of her son, a soldier killed during the battle against militants in Marawi, on Mindanao island, inside her shanty in Navotas, Manila. The Marawi battle could alter the way terrorism in Southeast Asia would be conducted and the manner Asean countries respond to it. REUTERS PIC
There is growing consensus among terrorism analysts that the battle of Marawi in Mindanao, the Philippines (May to Oct last year), is a watershed moment in the evolution of the terrorist threat in the Asean region.


Reportedly, the militant groups driving that conflict, such as the Maute Group and Abu Sayyaf, had in mind to turn Mindanao into a Wilayat (or province) of the Islamic State (IS). This is not a particularly novel goal in itself since the Jemaah Islamiyah (JI) has long aspired to establish an Islamic caliphate in Southeast Asia.

What surprised analysts most about the conflict was the readiness of the militants to take the fight to the Philippine military by engaging in a drawn-out urban war and employing tactics — including transforming densely packed buildings in the city into improvised tunnels — that initially confounded the government troops.

Needless to say, the emergence of IS in Southeast Asia — with the attacks in Jakarta in January 2016 widely seen as the first conducted in its name — is but the latest addition to a complex story of terrorism in the Asean region.

Some analysts have cautioned against undue exaggeration of the IS threat because they see the greater, long-term threat arising from a rejuvenated JI, which has a larger network and is better funded.

Against this backdrop, what is most sobering about the Marawi episode is the prospect that it could inspire and embolden other groups, if they have the requisite men and materiel, to emulate or even outdo Marawi in scale, style and substance in other Asean cities and urban areas.

Such a likelihood would also warrant the involvement of the armed forces of the Asean countries, whose force capabilities match or exceed that of the Marawi insurgents.

Much as Marawi could alter the way terrorism in Southeast Asia would, henceforth, be conducted, the manner in which Asean countries respond to the terrorist threat could also change in a number of ways.

First, Asean countries and their defence establishments are likely to deepen their collaboration in counterterrorism, not only among themselves, but with their external partners. They will do so through conducting joint exercises, sharing information and enhancing their force capabilities within existing frameworks such as the Asean Defence Ministers’ Meeting-Plus (or ADMM+).

In this respect, joint counter-terrorism exercises such as the one that took place in Singapore in May 2016, involving 40 special forces teams from all 18 ADMM+ countries could well increase.

Second, the Marawi conflict memorably led to separate offers of military assistance from Indonesia, Malaysia and Singapore to their imperilled Asean neighbor.

This implies that Asean countries are likely to seek new ways to collaborate against terrorism.

But, it should be said that Indonesia, Malaysia and Singapore — the “core countries” of Asean — have had a long history of security cooperation among themselves, including the Malacca Straits Sea Patrols and the “Eyes in the Sky” initiative.

More recently, Indonesia and Malaysia established the Trilateral Maritime Patrol with the Philippines in June last year to guard the Sulu-Sulawesi seas, a hub for transnational organised crime and militancy.

Going forward, the Asean defence establishments are likely to leverage on these existing forms of cooperation in their quest for new and innovative approaches in response to the growing scale and complexity of the terrorist threat in their region.

Needless to say, the prospects of a growing regional role for Asean’s militaries raises questions over how national governments are to avoid overstepping regional sensibilities and civil liberties even as they work to protect their citizens from terrorism and violence.

The likelihood of militarisation is especially poignant for countries with a complicated military past, such as Indonesia.

For instance, the Indonesian military’s establishment of its counter-terror unit, Koopssusgab, immediately re-ignited fears, unjustified or otherwise, over potential interference by the military once again in the country’s civilian affairs.

On the other hand, the possibility that Asean countries may soon find soldiers from other nations, including external powers, operating on their home soil cannot be ruled out.

How affected countries and societies in need of external assistance are able to host foreign troops and facilitate counterinsurgency operations without jeopardising their sovereignty is likely to emerge as a key concern as Asean countries and militaries cooperate to tackle the common challenge of terrorism in their neck of the woods.

[Tan See Seng is Professor of International Relations at S. Rajaratnam School of International Studies (RSIS), Nanyang Technological University, Singapore. He is also deputy director and head of research of the Institute of Defence and Strategic Studies at RSIS and a visiting scholar at the EU Centre in Singapore]