The main rebel forces—communists and Islamist groups—back Mr. Duterte’s plan and say they would bury their arms if they can manage their own political and economic affairs. But many fear the far-flung Philippine archipelago needs its strong central rule to avoid dissolving into a hodgepodge of fiefdoms led by local clans.

“We are already divided into islands, dialects, history and culture,” said Sen. Francis Escudero, one of many lawmakers skeptical of the plan.

On Thursday, Silvestre Bello, Mr. Duterte’s choice as labor secretary and one of his peace negotiators, said he would lead a three-man government panel who would meet with exiled communist leaders in Oslo June 14-16 to set the agenda for peace talks aimed at ending one of Asia’s longest Marxist insurgencies.

The rebels have freed several kidnapped policemen to help spur talks. But their opposition to U.S. military presence in the Philippines presents a sticking point.

Washington is preparing to station American forces in the Philippines for the first time in two decades under a recent defense pact that Mr. Duterte says he will honor.

Fidel Agcaoili, spokesman for the National Democratic Front, whose leftist rebel coalition includes a Communist Party that the U.S. deems terrorists, has demanded that the Philippines withdraw its offer to host the American military.

Mr. Bello said there should be no preconditions to the peace talks. “In the 12 years I’ve negotiated with them, this is the first time I have heard them take that position,” he said.

Mr. Duterte’s goal of decentralizing power would require a constitutional revamp.
Several recent Philippine leaders have tried unsuccessfully to change the country’s 1987 charter, forged in the aftermath of the Marcos dictatorship to bolster democracy.

But Mr. Duterte, a self-identified socialist who takes office June 30, argued in a recent interview that more autonomy would distribute economic development more equitably, ending rebellions that have cost an estimated 200,000 lives since the 1960s. He is particularly concerned for the country’s five million Muslims, who live largely in poverty on Mindanao, Mr. Duterte’s home island and where Davao is situated.

“Nothing short of federalism will bring peace to Mindanao,” he said in an interview.
The Communist leader Jose Maria Sison, a former university teacher to Mr. Duterte, recently said the election result raised the prospects for peace. The incoming Philippine leader has invited Mr. Sison to return from his Netherlands exile for peace talks.

The country’s two main Islamic rebel groups were united in their support for Mr. Duterte’s approach to quell their long-held grievances, said Abul Khayr Alonto, who is chairman of one of them, the Moro National Liberation Front. “It’s great news,” said Mr. Alonto in an interview here. “Home rule or self-rule is what our grandfathers were promised.”

Islamic rebel forces in the Philippines have struggled since the 1960s for greater autonomy. The movement split in two in the 1990s following a controversial peace deal. The breakaway faction signed its own peace deal with departing President Benigno Aquino III in 2014. But the autonomous Muslim region Mr. Aquino promised has yet to be established.

Philippine rebels have eased their battle in recent years amid attempts at reaching peace. But violence still occasionally flares.

Last year at least 44 police commandos were killed by Islamist rebels as they pursued an alleged terrorist. The two Islamist groups have an estimated 25,000 fighters and command widespread support.

An estimated 4,000 communist guerrillas continue to launch sporadic attacks across the country as they pursue a struggle for socialist revolution.

A separate group, Abu Sayyaf, a kidnap-for-ransom group that has sworn allegiance to Islamic State, lies outside the peace process. Mr. Duterte has threatened to wipe out its estimated 400 members in their remote jungle bases on the islands of Jolo and Basilan unless it hands over all hostages.

As part of his overture, Mr. Duterte has outlined plans for a cease-fire with communist guerrillas, floated a possibly amnesty for jailed insurgents, and chosen Communist Party-backed nominees for two cabinet posts and offered to appoint one more.

Asked about the possibility of cabinet appointments, the U.S. Embassy in Manila released a statement saying, “We would not speculate on the possible makeup of presumptive President-elect Duterte’s cabinet.”

Despite areas of agreement, ideological differences between Mr. Duterte and the Communists over the U.S. military presence and other issues put a lasting peace deal at risk.

Mr. Rood said Mr. Duterte’s plan to hold a referendum on his new constitution by 2019 is optimistic.

The initiative will meet with stiff opposition and its outcome is uncertain, Mr. Rood said, noting previous failed attempts at more modest constitutional changes. “Lots of ordinary people support federalism, but the elite tend not to like it” because it potentially would reduce their power, he said.

Many Philippine Muslims, however, are in favor, viewing in Mr. Duterte a politician who understands the plight of their poor region better than those in faraway Manila.

“A Duterte administration would be more fair to their aspirations and provide the foundation for a just and lasting peace,” said Amina Rasul, president of the Philippine Center for Islam and Democracy. 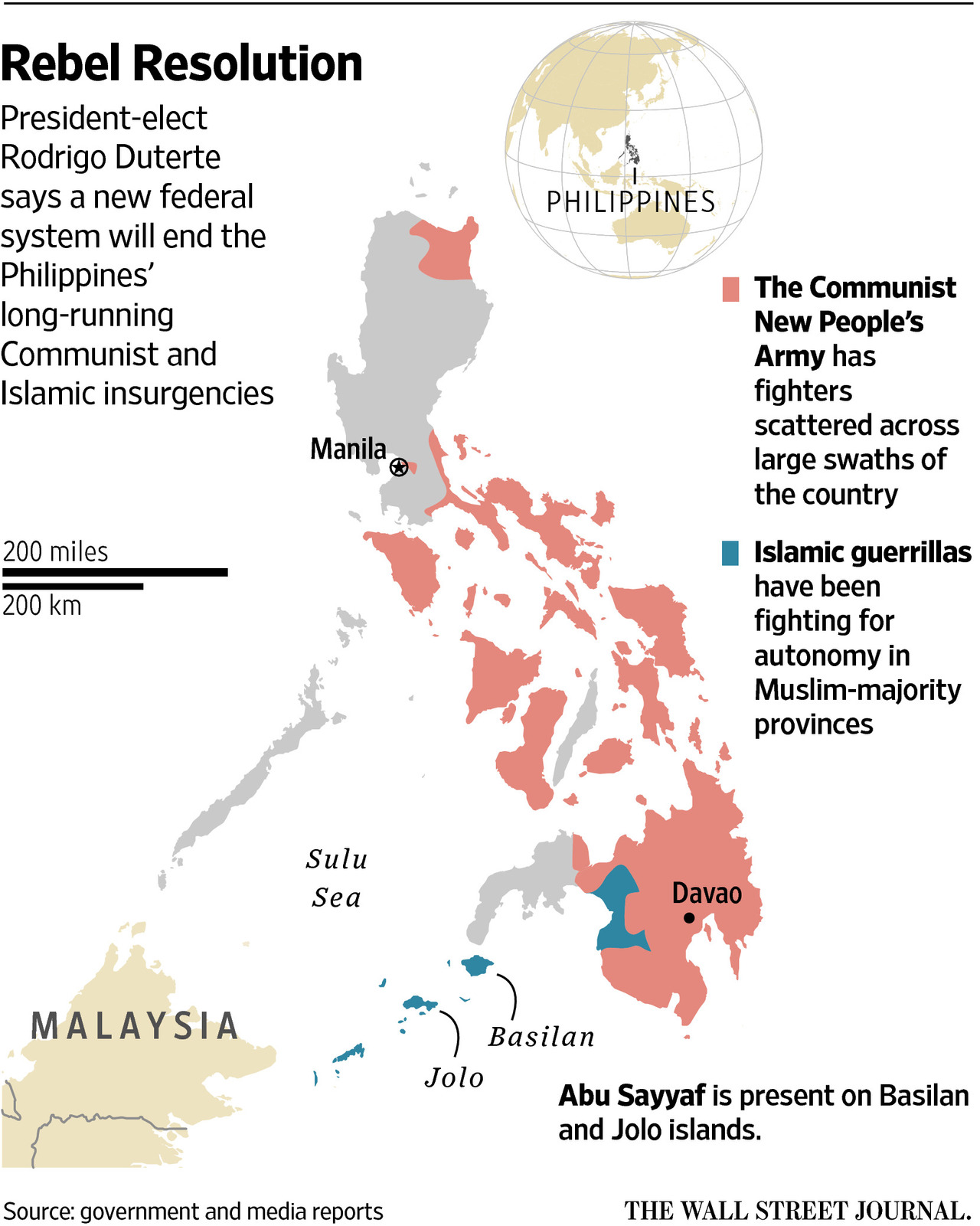