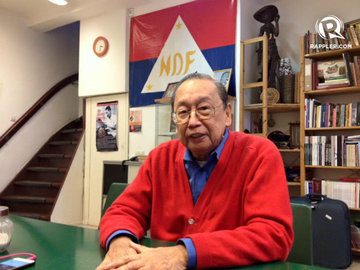 JOMA SISON. The founder of the Communist Party of the Philippines. File photo by Fritzie Rodriguez

The leader of the Philippines' communist insurgency said on Thursday, June 2, he expects to end nearly 30 years in exile by returning from Europe to Manila as early as next month.

While running for office last month, Rodrigo Duterte, now the newly-elected president, said Jose Maria Sison, the rebel leader and Communist Party of the Philippines founder, would be welcome to return home to participate in peace talks. (READ: Elect a Duterte or Poe for president, Joma Sison might come home)

The comments raised hopes of ending the 47-year-old insurgency, one of Asia's longest, which has claimed an estimated 30,000 lives since the 1960s.

"I want to visit (Manila) in July or August to hold serious talks with President Duterte," said Sison, who now styles himself as a consultant for the rebels' negotiating body, the National Democratic Front.

Sison, speaking to Manila reporters at a news conference via Skype, added that Philippine government and rebel emissaries were set to meet in Norway from mid-June to lay the groundwork for formal peace talks.

Sison, now 77, fled to Europe soon after Philippine peace talks failed in 1987 and has stayed abroad since, while the insurgency continued to claim thousands of lives.

Duterte has maintained ties with Sison, his former university professor, while the latter has lived in exile in the Netherlands.

Sison said his homecoming was contingent on the Oslo talks producing a ceasefire, as well as Duterte releasing jailed comrades, which the rebel group said currently numbered 543.

Duterte, 71, whose government will officially begin its term on June 30, has named two allies of the rebel group as prospective members of his cabinet, and pledged to free ailing or ageing communist rebels ahead of formal peace talks.

Sison warned the rebels will continue their attacks against government forces until a ceasefire is struck.

The communists' armed wing, the New People's Army, is believed to have fewer than 4,000 gunmen, down from a peak of 26,000 in the 1980s, according to the military. (READ: Duterte, Joma on Skype: Ceasefire if Davao mayor becomes president)

However it retains support among the deeply poor in rural areas.

Outgoing President Benigno Aquino revived peace talks soon after taking office in 2010 but shelved them in 2013, accusing the rebels of insincerity in efforts to achieve a political settlement.

The talks broke down after the communists demanded the release of scores of their jailed comrades, which the Aquino government rejected.

Sison said the rebels want "democratic reforms that would lead to national industrialisation and genuine land reform", as well as the removal of US military forces from Philippine territory.

"We are not asking for a switch to socialism," Sison added.