'Win or lose, we will abide by the law, and it is our expectation that China will behave in the same manner,' the Philippines' top diplomat says 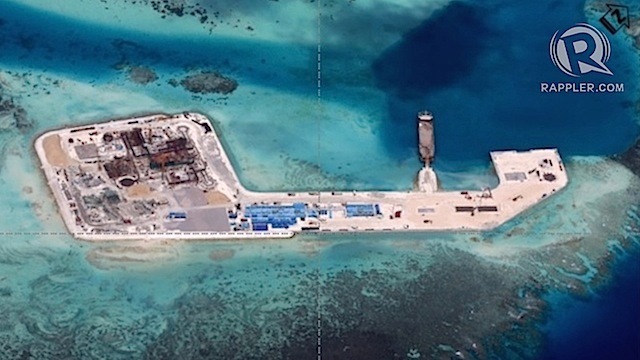 SUBJECT OF PROTESTS. A photo obtained by Rappler shows the status of reclamation activities in Keenan (Chigua) Reef in the West Philippine Sea (South China Sea) as of December 12, 2014.

Del Rosario said this move by the American lawmakers, led by US Senator John McCain, “is very helpful for our case,” as well as for other countries claiming the contested waters.

“It brings into focus with the international community the differences in terms of what is being said and what is happening on the ground,” the Philippines' top diplomat said in a forum with the Foreign Correspondents Association of the Philippines (FOCAP) on Thursday.

Reuters reported on March 19 that US senators requested a formal strategy to stop China's building of artificial islands in the disputed South China Sea, which the Philippines calls the West Philippine Sea.

Republican Senators McCain and Bob Corker, and Democrats Jack Reed and Bob Menendez, addressed their letter to US Secretary of State John Kerry and US Defense Secretary Ash Carter.

The American senators said that if the US doesn't implement a comprehensive strategy, “long-standing interests of the United States, as well as our allies and partners, stand at considerable risk.”

Quoted by Reuters, the US senators said the artificial islands “could embolden Beijing to declare a new air defense zone in the South China Sea like it announced in 2013 in an area contested with Japan.”

“We welcome the statements made and we also welcome the call for a more substantive support and focus on the Asia rebalance strategy of the United States,” Del Rosario said.

He also asserted the need for the Philippines' arbitration case against China.
He said the case upholds international law. He added, “We pursued arbitration precisely to preserve a valued friendship.”

“Win or lose, we will abide by the law, and it is our expectation that China will behave in the same manner,” Del Rosario said.

The Philippines has consistently slammed China for its artificial islands in the West Philippine Sea.

The Southeast Asian country, for one, cites the “widespread destruction of the region's biodiversity.”

It also argues that the reclamation activities disrupt the status quo in the disputed sea even before an arbitral tribunal before the Permanent Court of Arbitration (PCA) decides on the Philippines' case.

The Philippines boosted its case against China on March 16 by submitting to the PCA a 3,000-page document against the Asian giant.

http://www.rappler.com/nation/88013-philippines-us-china-reclamation
Posted by Retired Analyst at 6:19 AM