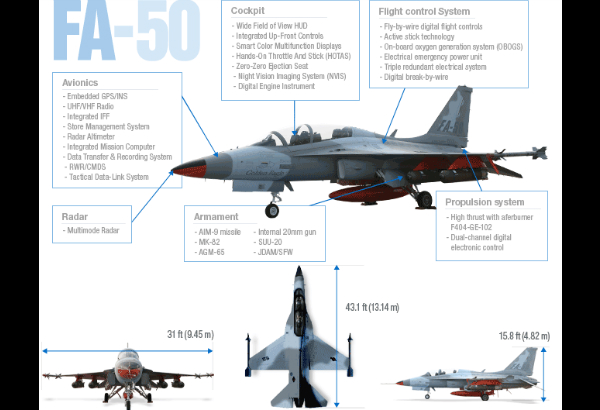 The Philippines will be acquiring new FA-50 fighter jets from the Korea Aerospace Industries. Image from www.koreaaero.com

The country's territorial defense is expected to be strengthened with the arrival of the new fighter jets of the Philippine Air Force (PAF), President Benigno Aquino III said on Tuesday.

Speaking at the 67th anniversary rites of the PAF in Pampanga, Aquino said the Philippines will finally get next year two of the 12 new FA-50 fighter jets acquired from South Korea.

Aquino said the delivery of the remaining fighter jets will be completed by 2017.

The President added that 17 more UH-1 helicopters are expected to arrive and join the four already possessed by the PAF.

The Philippines is modernizing its military amid the increasing tensions in the disputed South China Sea, which is entirely being claimed by Beijing with its nine-dash line.