Posted to the Philippine Star (May 8): WATCH: Several hurt as China rams vessels in disputed sea

In a video released by Vietnam's Ministry of Defense on Wednesday, Chinese ships backed by helicopters are seen ramming Vietnamese vessels trying to prevent China from putting up an oil rig in disputed waters of South China Sea near the Paracel Islands.

The video was posted on YouTube as taped from a press conference led by Thu, whose comments are subtitled on the video. 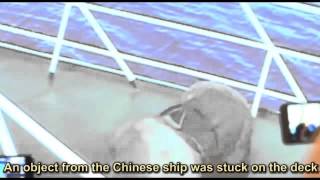 "It can be clearly seen that the cannons on the Chinese ship was uncovered and ready for using at any time," Thu remarked.

Thu said that China Marine Police still hit a Vietnamese vessel after it turned around and sped up to avoid a confrontation.