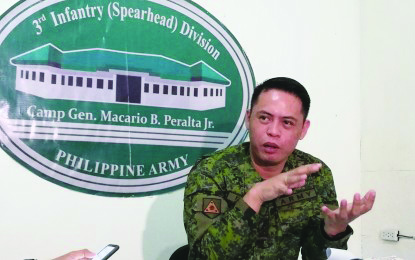 Philippine Army’s 3rd Infantry Division spokesperson says 12 more teams have been deployed in Iloilo and Capiz provinces on June 22 to go after members of the Communist Party of the Philippines-New People’s Army. PNA

Major Cenon Pancito III, 3ID spokesperson, said 12 teams from the 12th Infantry Battalion have been deployed in municipalities of Calinog, Jansiuay, Lambunao, and Maasin in Iloilo province along with Tapaz, Capiz on June 22 as part of the Community Support Program (CSP) to local government units (LGUs).

Pancito did not disclose the number of deployed troops but said they are enough to engage with the NPA rebels.

According to him, the CSP is being supported by the Capiz Police Provincial office and several government offices of the municipalities, among others.

“We hope through this approach, we can protect the people in barangays threatened by the rebels and also in NPA infested areas. Pero we can still accommodate ‘yung mga rebelde na gustong sumuko at gustong maka-avail ng government programs,” he added.

Meanwhile, 301st Infantry Brigade deputy commander Colonel Orlando Edralin emphasized the value of CSP as a tool to end the cruelty of the CPP-NPA with the help of the local government units.

“The CSP is really a big help to us in protecting the people from the true virus of the community – the Communist Terrorist Groups, which for 51 years have sown terror in the community. This activity is the beginning of new hope for the people of Capiz and Iloilo because of the stronger alliance and camaraderie between the Philippine Army and the LGUs,” he said.

“It is the hallmark of unity towards achieving peace and in ending the local communist armed conflict in Panay which for decades has caused unwarranted misery to the Ilonggos in the Island,” Edralin added.