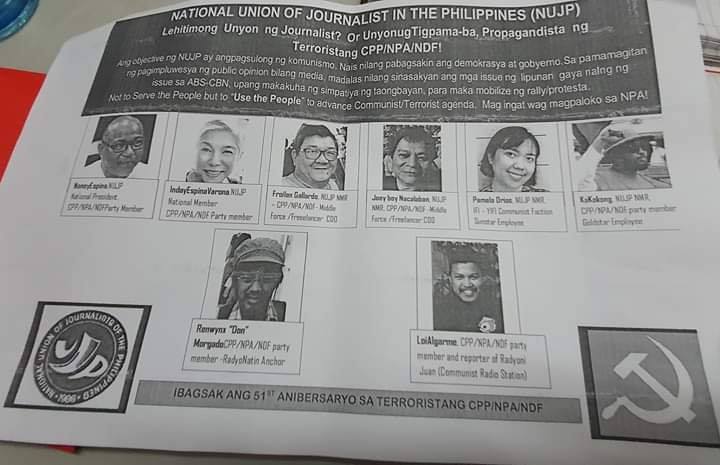 DAVAO CITY, Philippines – A radio network in Mindanao has denounced the red-tagging anew of one of its field reporters, as an ‘attack’ on critical media.

Malicious pamphlets tagging Radyo ni Juan Network field reporter Jessiemer Algarme and other local journalists as alleged members of the Communist Party of the Philippines and New People’s Army were distributed to the public in a church compound in Cagayan de Oro City on March 10.

Algarme was previously assigned as a field reporter for 92.7 Radyo ni Juan in Cagayan de Oro City. He is known as “Loi Algarme” on-air.

The Radyo ni Juan Network management, in a statement, condemned the vilification campaign as a “targeted attack” against the entire network.

“This personal attack on Algarme is not only an attack on an individual person but a targeted attack on the entire Radyo ni Juan Network whose only crime is to serve the interest of the Filipino people by airing the truth and current events,” said the network.

The network said this accusation is baseless and fabricated “coming from none other than government agents in Cagayan de Oro City.”

The incident has seriously affected Algarme’s safety, it added.

Algarme told Davao Today he might have been targeted because of his reporting on “people’s issues critical of the government policies.”

He called on authorities to take concrete steps in holding those who are behind the red-tagging campaign and protect the lives of journalists and other victims.

The network added that the red-tagging is also an attack on press freedom and the freedom of expression.

“It is intended to silence particular sectors of society who are critical of the Rodrigo Duterte administration and its policies,” it added.

Last February 28, malicious flyers were distributed immediately after journalists held a candle-lighting activity in front of ABS-CBN Northern Mindanao Station in CDO, as part of the nationwide protest action in support of the renewal of ABS-CBN franchise.

No particular group has been identified behind the red-baiting.

Reports said top officers of the Armed Forces of the Philippines (AFP) in Northern Mindanao have already denied that they are engaging in red-tagging.

The vilification campaign continues since then prompting the City Council of Cagayan de Oro in September 2019 to form a technical working group to look into the incidents and protect the individuals being red-tagged.

http://davaotoday.com/main/human-rights/radio-network-in-mindanao-assails-red-tagging-of-reporter/
Posted by Retired Analyst at 1:18 AM