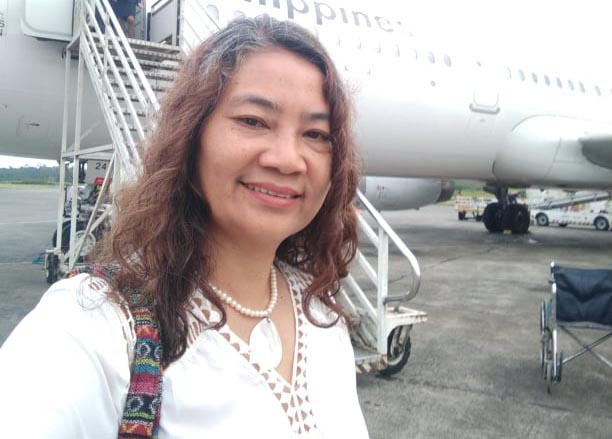 Gloria Tomalon, in her capacity as chair of KATRIBUMMU, was vocal in opposing attempts by five mining companies to operate in the Andap Valley complex. The five companies were the Romualdez-owned Benguet Corp., Abacus Coal Exploration and Development Corp., the Chinese-owned Great Wall Mining and Power Corp., ASK Mining and Exploration Corp., and Coal Black Mining Corp.

Tomalon is a prominent leader in the indigenous Manobo’s struggle as founder of the organization KATRIBUMMU and a council member of the National Anti-Poverty Commission (NAPC). Tomalon is also the sister of Bayan Muna Representative Eufemia Cullamat.

“The PNP [Philippine National Police] and AFP [Armed Forces of the Philippines] chose to illegally arrest my sister as the country grapples against the horror of this COVID-19 pandemic. [They] should stop the attacks against national minorities and respect our right to self-determination instead,” said Cullamat in a statement.

According to Cullamat, Tomalon was visited by elements of the Lianga police at her home on March 19, 11:20 a.m. She was then forced to go to the police station where a warrant of arrest was served to her.

Bayan Muna asserted that the charges of kidnapping and serious illegal detention were “trumped-up” and were “filed en masse against some 400 individuals, including leaders and members of Lumad organizations and civilians in Sibagat, Agusan del Sur, 2018.”
Tomalon has been the target of an intense red-tagging campaign. The state-owned Philippine News Agency labeled Tomalon as leader of the New People’s Army (NPA), linking her to an attack by the NPA guerrillas in sitio Emerald, barangay Diatagon and an alleged failed ambush on February 19.

A statement by Maj. Gen. Antonio Parlade, Jr., spokesperson of the National Task Force to End the Local Communist Armed Conflict (NTF-ELCAC), also described Tomalon as the chair of an organization that “promotes communist principles.”

Cullamat belied NTF-ELCAC’s claims. “This is part and parcel of the PNP and AFP campaign to link IP leaders who are opposing the mining and other environmentally destructive activities to armed groups in a bid to illegitimize their struggle and eventually suppress their voice,” she said.

Tomalon, in her capacity as chair of KATRIBUMMU, was vocal in opposing attempts by five mining companies to operate in the Andap Valley complex. The five companies were the Romualdez-owned Benguet Corp., Abacus Coal Exploration and Development Corp., the Chinese-owned Great Wall Mining and Power Corp., ASK Mining and Exploration Corp., and Coal Black Mining Corp.

Tomalon’s brother, Pablito Campos, was also arrested in February 2018 and was branded as an “NPA spokesperson.” Her other brother, Dionel Campos, was the chairperson of Malahutayong Pakigbisog Alansa sa Sumusunod (Mapasu) and was killed by members of the paramilitary group Magahat-Bagani in September 2015.

Other Bayan Muna representatives also condemned the arrest. House Deputy Minority Leader Carlos Isagani Zarate said the arrest was brought about by Executive Order 70 and the NTF-ELCAC, which has been used to “attack and harass even the legal progressive organizations, their members, and leaders.”

“The Gloria Tomalon case is no exception as it obviously bears the mark of the typical PNP-AFP false campaign to align the leaders of legal organizations to the communist insurgents to create an excuse to attack, harass, and even kill them,” Zarate said.

Rep. Ferdinand Gaite also condemned the arrest in the middle of a crisis. “The government is asking for united effort to combat the spread of COVID-19,” he said, “but clearly, what is still in full swing is not war against the pandemic, but the government’s war against democratic dissent, against people’s political participation, against the indigenous people’s assertion of their rights.”

Tomalon is currently in custody of the Lianga police. Her sisters have already sought the help of both the NAPC and the Commission on Human Rights.

https://www.bulatlat.com/2020/03/20/manobo-leader-arrested-in-surigao-del-sur-on-trumped-up-charges/
Posted by Retired Analyst at 1:05 AM