(UPDATED) AFP chief General Felimon Santos Jr calls on all who had close contact with him since March 13 to go on self-quarantine, and those who met him from March 9 to 12, to take precautions and seek medical advice 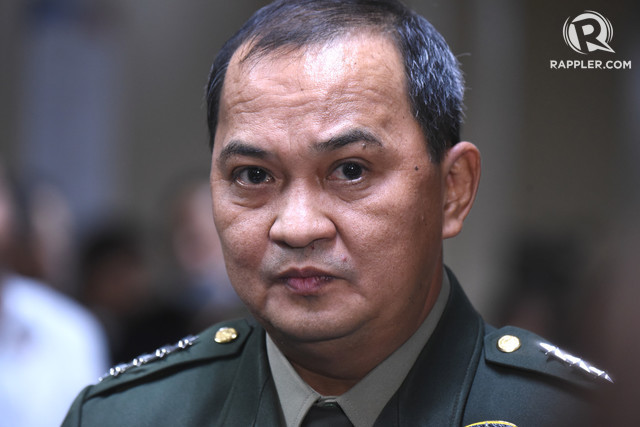 Defense Secretary Delfin Lorenzana shared this to reporters on Friday, March 27, and afterwards confirmed by the AFP.

Santos was tested on Tuesday, March 23, the same day he told reporters he was on home quarantine after coming into contact with another senior military officer who tested positive for the virus.

The military chief’s own test result came out earlier Friday, showing he was positive for COVID-19.

Santos will be on strict home quarantine at his residence in the AFP General Headquarters, Camp Aguinaldo in Quezon City, for 14 days – from Friday until April 10.

“He is well and in good health condition. He will be in his military quarters where he will continue the discharge of his duties and responsibilities,” said the AFP Public Affairs Office in a statement.

Santos called on all who had close physical contact with him since March 13 to also go on self-quarantine, and those who met him from March 9 to 12, to take precautions and seek medical advice, the AFP said.

That includes Defense Secretary Delfin Lorenzana, who said earlier on Friday that he was going on home quarantine for 14 days after having been in “close proximity” to Santos during events on March 22 and 23.

Santos had donned the new rank of a senior AFP officer who was promoted recently. That officer later tested positive for the coronavirus, the AFP said. It did not disclose the date of the officer’s encounter with Santos.

On March 11, Santos and 21 other senior military officers took their oath before President Rodrigo Duterte in Malacañang.

Duterte was tested for the virus the following day, March 12, because some members of his Cabinet had earlier come into contact with a coronavirus-positive patient.

Reporters on Friday asked Presidential Security Group commander Colonel Jesus Durante III whether Santos had been in contact with the President this week, or if they had attended the same event in Malacañang. Durante said Santos had no recent contact with Duterte.

https://www.rappler.com/nation/256078-military-chief-santos-tests-positive-coronavirus
Posted by Retired Analyst at 4:07 AM