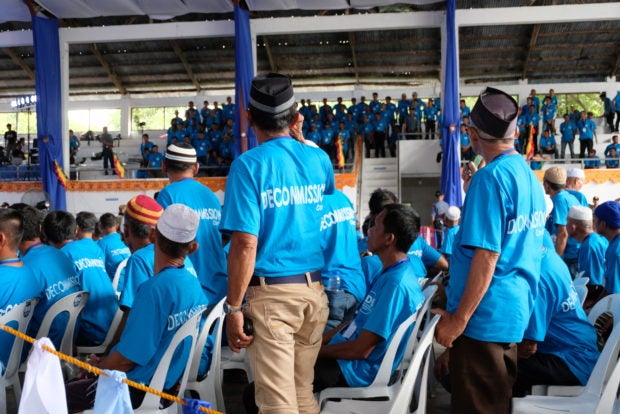 Like the other former combatants, he received P100,000 on March 11 at the provincial capitol during the ceremony, signaling the conclusion of the second phase of the decommissioning process.

Aliasgal said he wanted to start a “small business” using the amount turned over to him as financial aid from the government.

“We will invest. I told my comrades, whatever we receive in this decommissioning, we will use it as an instrument towards our long-awaited peace. We all believe that peace comes from within us,” he said.

President Duterte witnessed the launching of the second phase of the decommissioning process in September last year also at the old provincial capitol here.

With the completion of the second phase, Aliasgal expressed hope he and his former comrades would tread peaceful and better lives.

“I hope that our lives and mindsets would be back to normal, that we wouldn’t go back to where we’ve been before,” he said, referring to the war that stunted the growth of the region known today as the Bangsamoro Autonomous Region in Muslim Mindanao (BARMM).

He vowed to encourage the youth to get an education to lead better lives and to contribute to the growth of the new Bangsamoro region.

OPAPP said the government had earmarked P2.4 billion this year to implement the other aspects of normalization, which include education, health, technical and livelihood training, livelihood programs and assistance, agriculture support, social interventions, and camp transformation.