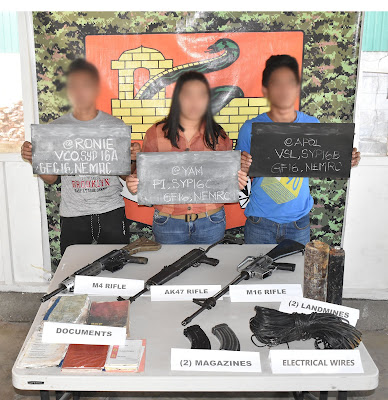 On June 19, 2019, three members of the CNTG who were being monitored in Bukidnon surrendered to the 8th Infantry Battalion in Barangay Kalabugao, Impasug-ong, Bukidnon, bringing along with them four International Humanitarian Law (IHL) banned landmine and a Garand rifle. 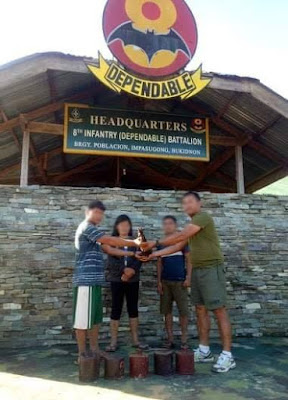 The three, who were motivated by the government's programs facilitated by the Community Support Program (CSP) of 4th Infantry Division to surrender, were alias Alimokon, a medic; Lakap, a member of the Militia ng Bayan; and Jake, an element of a squad of CNTG in the area.

Another, two UGMO members left the underground organization when they sought the help of the elements of 65IB on June 19, 2019, at Sitio Canaan, Brgy. Dansolihon, Cagayan de Oro City. The two turned-in one M635 rifle and one Uzi sub-machine gun. 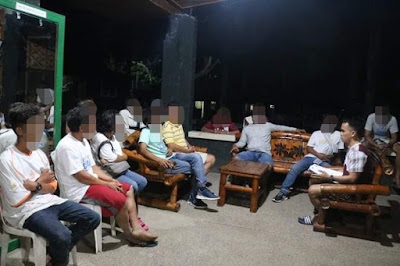 In Monkayo, Compostela Valley, alias Puks, a member of the CNTG in the area turned himself into the 25IB in the evening of June 19, 2019. He brought with him one Cal .45 pistol and two 25-kg IHL banned landmine.

Previously, another three NPA Leaders yielded to the elements of 30IB in Cuyago, Jabonga, Agusan Del Norte on June 18, 2019. They were identified as alias Yam, a Political Instructor; alias Ronie, a Vice Commander of a Sandatahang Yunit Pampropaganda (SYP) Platoon of the NPA group in the area; and alias Apol, a Vice Squad Leader of the same group.

After their surrender, they led the recovery of one M4 rifle; one AR 15 rifle; one AK47 rifle; and two IHL banned landmine stashed in the area.

In Malabog, Paquibato District, Davao City, a Secretary of the Underground Mass Organization (UGMO) surrendered to 16IB, bringing along nine IHL banned landmine. Accordingly, he yielded because he observed that the government are attending to the issues that they were raising before.

Another nine members of the UGMO in Manipongol, Maco, Compostela Valley also dissociated from the CNTG when they reported to Headquarters 71IB at Purok 8, Brgy. Nueva Visayas, Mawab, CVP morning of June 18, 2019.

Two NPA members, likewise, surrendered to Major Franco Boral of the 1st Special Forces Battalion in La Fortuna, Impasug-ong, Bukidnon on June 17, 2019. Accordingly, the two, identified as alias Salazar, a Supply Officer of the NPA group being monitored in the area, and alias Alon, a member of the SYP of the same group, yielded after observing the opening of the TESDA Skills Training which intended for the members of the community in the said barangay.

In a separate instance in the morning of June 17, 2019, another four NPA members escaped from their group in Lingig, Surigao Del Sur and yielded to the elements of 67th Infantry Battalion at Poblacion, Monkayo, Compostela Valley. They were identified as alias Karen, an armed element; alias Jasmin, a medic; alias Charlie, a medic; and alias Prex, a Team Leader of the NPA group being monitored in Monkayo-Lingig-Boston tri-boundary.

Meanwhile, another thirty-eight (38) UGMO members voluntarily dissociated with the CNTG after they appeared before the Community Support Team of 30th Infantry Battalion in Barangay Can-aga, Malimono, Surigao Del Norte on June 17, 2019.

These surrenderees are now undergoing debriefing and will be subjected to needs assessment survey for their possible assistance and enrollment to the Enhance Local Integration Program (E-CLIP) of Local Government Units concerned.

Lt. Gen. Felimon T. Santos, the exodus of surrender to the strong partnership between the military and the different agencies and Local Government Units in Eastern Mindanao.

"The aggressive security operations and the strong resolve of the government to address insurgency by employing holistic approach encouraged the members of the CPP-NPA Terrorist Group (CNTG) to get back to the folds of the law". Lt. Gen. Felimon T. Santos Jr., Commander Eastern Mindanao Command said.

https://www.eastmincomafp.com.ph/2019/06/communist-surrender-en-masse_23.html
Posted by Retired Analyst at 9:10 AM