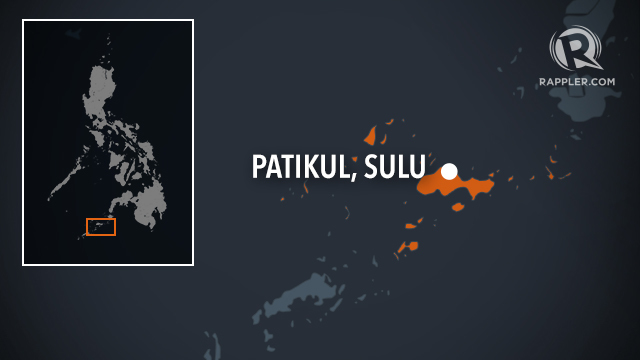 Two boat crewmen kidnapped by the Abu Sayyaf Group (ASG) late last year have been recovered by military and police forces in Sulu.

In a statement sent to the media on Saturday, July 8, the Western Mindanao Command (Wesmincom) reported that Reyjim Rocabo and Roel Leones were recovered in Daang Puti, Patikul, Sulu on Friday afternoon, July 7.
Joint elements of the Anti-Kidnapping Group, the Sulu provincial police, and the 501st Brigade under Joint Task Force Sulu facilitated the recovery.

Rocabo and Leones, crewmen of FB Ramona 2, were among the 4 men kidnapped by the Abu Sayyaf on December 20, 2016, in the Celebes Sea.

The Wesmincom said Rocabo, 41, and Leones, 37 – both from Tukuran, Zamboanga del Sur – "were on board a motorcycle when intercepted and recovered by government forces."

"Upon initial verification, the duo revealed that they were kept under the custody of a certain Ben Tatoo and Almujer Yadah during their captivity, along with some other kidnap victims," the Wesmincom added.

Rocabo and Leones are now under the custody of the Anti-Kidnapping Group. They "will eventually be turned over to their families after actionable information [would] be taken from them," said Brigadier General Cirilito Sobejana, commander of Joint Task Force Sulu.

The 4th crew member, Roy Borja Ramos, was rescued on June 8 at Barangay Lagtoh in Talipao town, after making an escape from his captors in the Patikul area two days earlier.

The Wesmincom said that 20 people – 16 foreigners and 4 Filipinos – remain in the hands of Abu Sayyaf.

3 Abus, 1 soldier killed in encounter
Meanwhile, the Wesmincom also reported that 3 Abu Sayyaf members were killed in an encounter in Patikul on Saturday morning.

The military acted upon the information taken from Rocabo and Leones, the Wesmincom said, adding that the two "pinpointed the locations of the targetted Abu Sayyaf group [which], according to the duo, is keeping captive other kidnap victims including some Vietnamese crewmen."

The 21st Infantry Battalion, headed by Major Christopher Genzola, engaged in a firefight with the ASG under Almujer Yaddah at Sitio Darayan in Patikul.

Troops recovered "one unidentified dead body of the enemy from the encounter site" during clearing operations. The soldiers "were also able to see the bandits dragging two bodies of their companions who appeared to be already lifeless," said BGen Sobejana.

The Wesmincom said one soldier also died in the encounter, while 15 others were slightly wounded.

"The family of the fallen soldier will immediately be notified and will receive all compensations due to the family of a hero," said Sobejana.

The Joint Task Force Sulu are in still in the area pursuing the bandits, he added.