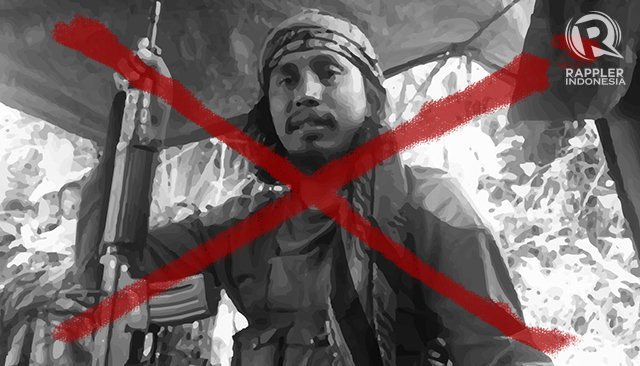 Indonesia – Following the death of Indonesia's most wanted terrorist, a terrorism expert warned that members of his network may join the Abu Sayyaf.

On Tuesday, police said one of the two men they killed in a gunfight was Santoso, alias Abu Wardah, who has been called the "symbolic heart of the jihadi movement."

While the news was welcome, terrorism expert Al Chaidar warned this could mean members of Mujahidin Indonesia Timur (MIT or East Indonesia Mujahideen), which Santoso formed, may opt to go to the Philippines.

He said they could choose to join Abu Sayyaf, which is similar to the MIT, now that the police forces are familiar with their whereabouts in Poso, the jungle area where the group is based.

"Thus the remaining MIT followers may go to Abu Sayyaf, if they manage to get out of Poso."

The MIT came to the attention of authorities when they killed two police officers in 2011, propelling Santoso to the top of the most wanted list.

The MIT engaged in more deadly attacks against security forces in the years that followed and, as Santoso's reputation grew in jihadi circles, militants flocked to the training camps.

Meanwhile, Abu Sayyaf has caused significant problems to the region following their consecutive kidnappings of foreigners.

The Abu Sayyaf is a loose network of a few hundred Islamist militants based in the southern islands of the Philippines. It was formed in the 1990s with seed money from Osama bin Laden's Al-Qaeda network, and has earned millions of dollars from kidnappings-for-ransom.

Its leaders have also pledged allegiance to the Islamic State group.