Favorable ruling on PH-China sea dispute can be enforced – Carpio

From Rappler (Jun 17): Favorable ruling on PH-China sea dispute can be enforced – Carpio

Senator Juan Ponce Enrile pushes for a stronger air force, citing how China 'never attempted to build anything in the West Philippine Sea' during Marcos' time because of squadron of fighter planes in Palawan 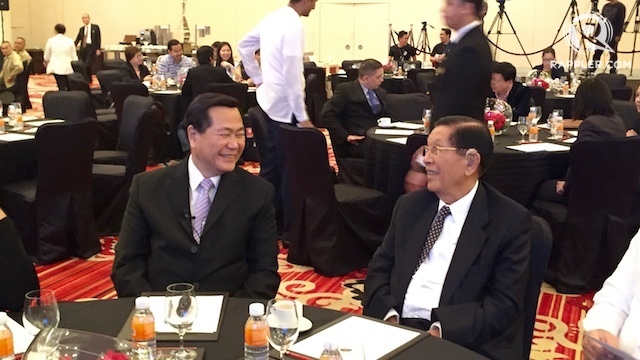 'NOT HELPLESS.' SC senior associate justice Antonio Carpio (left) says the Philippines won't be helpless in trying to enforce a possible favorable ruling in its maritime dispute with China. Photo by Katerina Francisco/Rappler

If the international tribunal hearing the case over the disputed South China Sea decides in favor of the Philippines, the ruling can still be enforced despite Beijing's repeated pronouncement that it would not abide by any such ruling.


This was what Supreme Court senior associate justice Antonio Carpio said during the Manila Defense Symposium on Friday, June 17, where he delivered a lecture on the dispute between the Philippines and China over the West Philippine Sea (South China Sea).
This comes several weeks before an international tribunal at The Hague is expected to issue a ruling on the historic case filed by the Philippines against the China in 2013.
Citing the United Nations Convention on the Law of the Sea (Unclos), the Philippines is challenging China's 9-dash line, which the Asian superpower uses to claim virtually the entire South China Sea. (READ: EXPLAINER: Philippines' 5 arguments vs China)
The 9-dash line encroaches on the Philippines' 200 nautical mile exclusive economic zone (EEZ), affecting Manila's exclusive rights to fish in these waters. It also covers the high seas, which, under the Unclos, are part of the global commons and are open to all states.
While Carpio expressed confidence that the Philippines has strong arguments in its case, he acknowledged that enforcing a possible favorable ruling would be a different matter, especially as China has said that it would reject and ignore any such ruling.
"There is no world policeman to enforce the ruling of the tribunal," Carpio said.
"So what do we do? If the ruling strikes down the 9-dash line, it means there are high seas in the South China Sea, there are EEZs.... And in the EEZ and high seas, there is freedom of navigation. With that ruling, the Americans – they have already said it – will conduct freedom of navigation operations."
Carpio said that the global naval powers will use the ruling to protect its right to conduct navigation operations in the high seas. But he added that questions on the rights over oil and gas fields are another matter.
"As far as freedom of navigation is concerned, the naval powers themselves will enforce that. But in the dispute over who can exploit oil fields and gas, that is our battle with China. We assume that battle ourselves. Nobody will fight that battle for us," Carpio said.
While the Philippines may not have the strength to match China's military power – especially considering its island-building activities in the disputed waters – Carpio said that Manila can appeal for international help over the issue.
The Philippines, for example, can go to the United Nations general assembly and sponsor a resolution and compel China to comply.
He cited the 1986 case of Nicaragua v. United States of America that was filed before the International Court of Justice (ICJ), where the US eventually complied with the ruling because of the dispute's cost to US reputation.
"In our case, we won't be alone because Malaysia, Vietnam, [and other countries] will use the ruling.... It will be a huge reputation cost [for China]," he added.
The SC justice also said that China's reclamation of disputed waters "won't ripen into ownership" as long as the Philippines has its ruling.
"There are many things we can do with the ruling, we can be creative about it... We are not totally helpless here. We have to cultivate strength in our alliances," he added.
'Improve defense capabilities'
At Friday's forum, Senator Juan Ponce Enrile emphasized the need for the Philippines to build up a strong and credible self-defense force, particularly by boosting the air force.
He said that during the Marcos years, the Chinese government "never attempted to build anything in the West Philippine Sea" because there was a squadron of fighter planes in Palawan ready for deployment.
"I hope [that in the] next administration, we improve our deterrent capability first by establishing a credible airforce," he said.
He also said that the Philippines should not depend on the military deal between the Philippines and the United States, which was signed amid China's increasing aggressiveness in disputed territories.
"There is no binding agreement on the part of the US to come to our succor in case there's a trigger event calling for the application of the Mutual Defense Treaty. Even if there is an incident covered by that treaty, it still has to be approved by the Congress of the US," Enrile said.
http://www.rappler.com/nation/136779-ruling-philippines-china-south-china-sea-enforcement-antonio-carpio
Posted by Retired Analyst at 6:08 AM