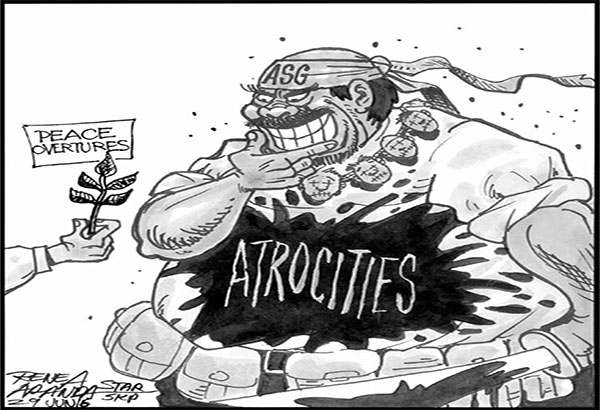 It’s one thing to shoot someone dead; it’s another to kill by chopping off someone’s head. Whichever side of the law the killer is on, decapitating someone suggests not just a necessity to kill, but a psychopath’s perverted enjoyment of taking life.

In the past weeks, Abu Sayyaf bandits have perpetrated this atrocity on two Canadian captives, and for what? Not in the name of any ideology, religious belief or social advocacy, but simply for love of money. If there are lowlifes who deserve to be eliminated in this country, the Abu Sayyaf should top the list.

Keeping those atrocities in mind, the incoming administration must tread carefully in its reported plan to discuss peace with the Abu Sayyaf. In the first place, peace has never been on the agenda of the group. The only goal ever mentioned by its founders, and rarely mentioned by subsequent commanders, has been the creation of a pan-Islamic state – an impossible dream in this country. The group also promises death, in the most brutal manner, to anyone who gets in the way of the self-styled “Bearer of the Sword.” Soldiers wounded or captured by the group are beheaded.

Catholic priest Roel Gallardo had his toenails pulled out before he was dragged through a dirt road and murdered by the Abu Sayyaf in Basilan. The terrorists have attacked churches and convents in the conflict zones of Mindanao, killing priests and a bishop, and lopping off the breasts of nuns before killing them. The incoming president may think members of the clergy, like journalists, deserve a fate worse than death, but there cannot be a place for barbarism in a free society.

Apart from priests and nuns, the Abu Sayyaf has also targeted teachers for execution and raided schools, becoming one of the worst hindrances to public education in the conflict zones where learning is badly needed.

For sure there are people who support the Abu Sayyaf out of extreme poverty, or out of necessity due to threats to their safety. But they will not be the ones to represent the group in case the government pushes through with peace overtures; the representatives will be the leaders who are directly responsible for the atrocities.

Why should persons in possession of two sachets of shabu be killed, while those who have tortured and murdered scores of innocent people deserve a second chance? That is surrender by the state, and it breeds impunity.