Mamasapano was a 'crisis of confidence' in PNP, says Marquez

From Rappler (Jun 28): Mamasapano was a 'crisis of confidence' in PNP, says Marquez

In his retirement ceremony, PNP chief Ricardo Marquez turns emotional and looks back on how the deadly Mamasapano clash affected the police force 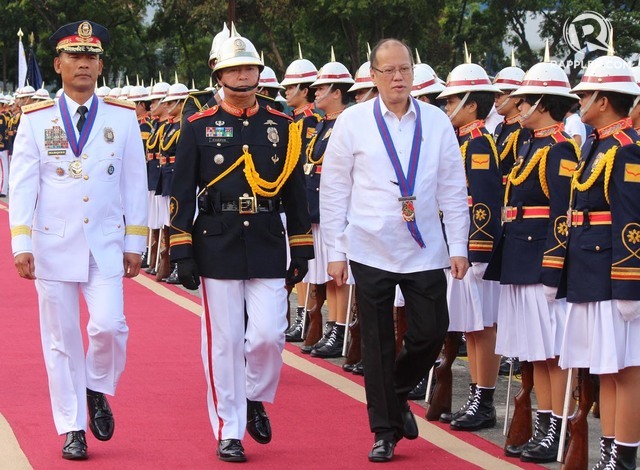 The police general who took over the Philippine National Police (PNP) in the aftermath of its bloodiest one-day operation yet admitted on Tuesday, June 28, that it caused a "crisis of confidence" in the young police force.

Director General Ricardo Marquez, who retired from the uniformed service Tuesday afternoon, was emotional, sentimental, and proud as he spoke before the police force one last time.

"In the past 11 months and two weeks, I often get up every morning and wish that under my leadership the PNP would exceed your expectations," said Marquez, who is retiring two months earlier than scheduled.

"Hindi naging madaling pamunuan ang ating kapulisan sa gitna ng pagdadalamhati at agam-agam (It was not easy to lead the police force during a time of mourning and doubt). We had just lost so many valiant young officers in Mamasapano. [We were] embroiled in yet another crisis of confidence," added Marquez.


Of those killed, 44 were SAF troopers who found themselves pinned down by local armed groups on January 25, 2015.
The aftermath of the Mamasapano clash saw weaker morale in the police force, as well as a dip in President Benigno Aquino III's ratings. Aquino was criticized for supposedly allowing his friend, then PNP chief Alan Purisima, to play a role in the operation despite the latter's suspension from service.
Aquino was also criticized for opting to skip the arrival ceremonies for the bodies of the slain SAF troopers. Instead, he attended a car plant inauguration in a nearby province.
"Sa ganitong pagkakataon, mahalaga po muling pukawin ang pag-asa at pananalig ng puso ng bawat isa (On this occasion, it is important to renew each one's hope and faith)," said Marquez, who headed the PNP Directorate for Operations at the time of the SAF mission.
Like many other Camp Crame officials, Marquez was unaware of the operation until it happened.
Aquino and his allies denied any wrongdoing on the President's part, despite an internal PNP probe that outlined his lapses in the lead-up to the operation.
The President was the guest of honor during Marquez' retirement honors.
As he looked back on his 11-month term as PNP chief, Marquez thanked Aquino for trusting him even if they did not know each other personally.
Purisima, in contrast, was a good friend of Aquino's from the 80s.
Aquino, in turn, thanked Marquez for his service and said he felt "regret (panghihinayang)" over the police general's retirement.
Marquez turns 56 – the mandatory age of retirement – in August yet. He opted to retire ahead of schedule to make way for Chief Superintendent Ronald Dela Rosa, incoming president Rodrigo Duterte's pick to head the PNP.
Aquino himself officially ends his term on Thursday, June 30.
http://www.rappler.com/nation/137928-pnp-chief-ricardo-marquez-retirement-mamasapano-crisis-confidence
Posted by Retired Analyst at 8:39 PM