The military says this is in addition to the passage of 4 Chinese vessels earlier this year, all without permission from the Philippine government 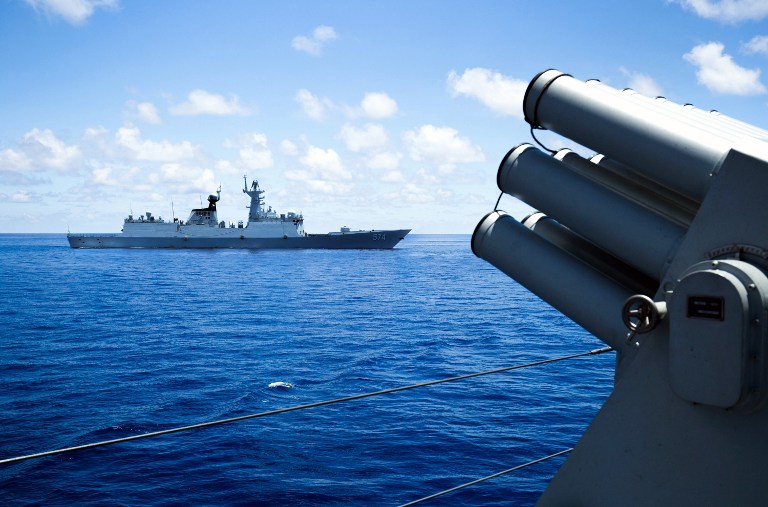 WARSHIPS SPOTTED. This photo taken on May 10, 2016 shows crew members of China's South Sea Fleet taking part in a logistics supply drill near the James Shoal area on South China Sea. Beijing claims sovereignty over almost the whole of the South China Sea, on the basis of a segmented line that first appeared on Chinese maps in the 1940s, pitting it against several neighbours. / AFP PHOTO / STR / China OUT / TO GO WITH AFP STORY CHINA-POLITICS-MARITIME-DIPLOMACY BY BEN DOOLEY

The warships were seen passing through Sibutu Strait, considered an international sea lane where foreign ships have the right of innocent passage. However, customary maritime law requires warships to notify the government of the coastal state beforehand.

“Since these are warships, their entry to our territory should be coordinated [with Philippine authorities],” Sobejana in an interview provided to reporters.

Besides, the 5 Chinese warships’ passage cannot be considered “innocent” because they were on a curved course, Sobejana said.

On August 6, the AFP Western Command (Wescom) said 4 Chinese warships passed through the waters near Balabac Island in Palawan province on June 17 without permission, and virtually ignored radio communications from Philippine patrols.

The reported passage of the 3 Chinese warships in August came after Chinese Ambassador Zhao Jianhua supposedly said he would tell the Chinese Navy to give notice before having their warships enter Philippine waters.

Lorenzana said Zhao made the commitment on July 22, the day of President Rodrigo Duterte’s State of the Nation Address.

On July 31, AFP spoksperson Brigadier General Edgard Arevalo said there was “duplicity” in the passage early this year of the first 4 reported Chinese warships because their automatic identification systems must have been deliberately turned off to avoid detection by radar.

Arevalo called it a “deception.”

Lorenzana has questioned the presence of Chinese naval and survey vessels in Philippine seas.

Sobejana said the Westmincom has informed the national leadership about the latest 5 Chinese warships they spotted so that "they can engage with their counterparts in the Department of Foreign Affairs or with their attachés in Manila.”

The Department of Foreign Affairs (DFA) recently said it filed diplomatic protests against the presence of Chinese vessels around Pag-asa Island in the West Philippine Sea, and of two Chinese survey vessels in different parts of the country.

It is unclear whether the DFA has officially protested the clandestine passages of Chinese warships through Philippine territorial waters.

https://www.rappler.com/nation/237764-more-chinese-warships-spotted-philippine-waters-july-august-2019
Posted by Retired Analyst at 8:16 AM