Esperon: Peace zones up for review Gov’t looking at Cordillera as model in fight against communist rebels

From the Philippine Daily Inquirer (Jul 26, 2019): Esperon: Peace zones up for review
Gov’t looking at Cordillera as model in fight against communist rebels 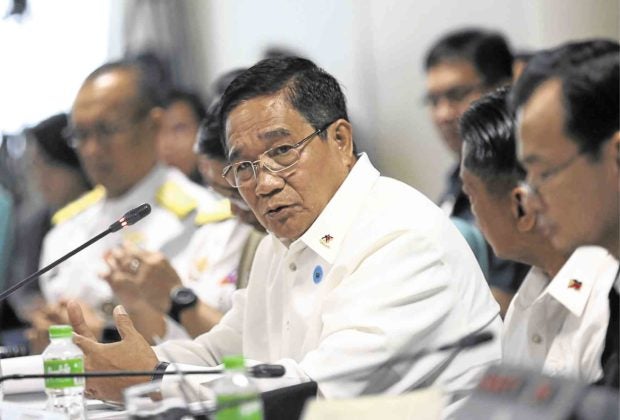 Within these areas, like in Sagada town, Mountain Province, armed clashes between the military and the New People’s Army (NPA) are prohibited.

But Esperon said these zones would be reviewed because some communities, especially those in Mindanao with similar arrangements, have barred the presence of police and military personnel.

The official talked to reporters on the sidelines of a summit of the National Task Force to End Local Communist Armed Conflict (NTF-ELCAC) here.

Esperon said elders in peace zones were able to stop uniformed personnel from entering but not rebels who conceal their identities and weapons.

In some cases, the zones allow relatives who join the NPA to hide from authorities, a police official said.

Esperon said new rules must be set in place so even the military’s engineering brigades could build roads or bridges near or within peace zones as part of the government’s plan to improve the lives of people in remote communities.

He said the NTF-ELCAC was not a police or military operation but a coordinated government drive to bring public services to poor communities.

Rebels have taken advantage of peace zones, but the government will continue to recognize these areas, said Maj. Gen. Pablo Lorenzo, head of the Army’s 5th Infantry Division.

The peace zone review could lead to “mechanisms for the efficient and effective delivery of services,” Lorenzo said.

The Cordillera is being considered an NTF-ELCAC model because rebel presence in the region has dwindled, said Vicente Agdamag, National Security Council deputy director general.

About 170 armed rebels operate in Abra, Benguet, Ifugao and Mountain Province, according to recent estimates of security agencies.