From the Philippine Star (Jul 26, 2019): DND verifying presence of 100 jihadists in Mindanao 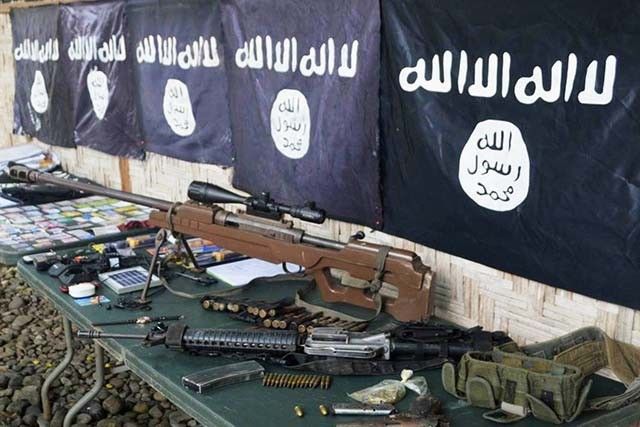 Lorenzana made the revelation after confirming the presence of seven Islamic State (IS) terrorists – reportedly nationals of Egypt, Malaysia, Indonesia and Singapore – who are operating with the Abu Sayyaf in the country.

Lorenzana made the revelation after confirming the presence of seven Islamic State (IS) terrorists – reportedly nationals of Egypt, Malaysia, Indonesia and Singapore – who are operating with the Abu Sayyaf in the country.

Other reports said close to 100 foreign jihadists that include those from Indonesia, the Middle East, Thailand, Bangladesh, Turkey and Morocco have also entered the country.

At least 40 of these terrorists are being tracked down by military and police forces.

“We can only confirm the seven foreign fighters who were identified already. On the 100 others, we also received that (information) before and that they are in Central Mindanao. We don’t know yet their nationalities and we cannot find them, so we consider this report as just information as it cannot be confirmed because we do not know if they are really there or not,” Lorenzana said.

Earlier, security analyst and Miriam College professor for International Studies Rommel Banlaoi bared that scores of foreign jihadists are already operating alongside Abu Sayyaf bandits in Sulu and in some areas of Central Mindanao.

Banlaoi said that these foreign IS terrorists were mostly “new arrivals” while the others are remnants of the pre-Marawi and post-Marawi siege.

At least two key sources within the government’s anti-terror agencies confirmed this information. They refused to give specifics, though.

“There’s already a lot of them in the country,” one of the sources said, adding that these foreign jihadists are currently engaged in recruitment activities in their continuing plan to organize local militants to become suicide bombers in Sulu and Basilan.

The influx of foreign jihadists, the second anti-terror official said, was triggered by the IS’s heavy losses in the Middle East.

He added these foreign jihadists are now heading towards Southeast Asia to reclaim an old caliphate with Mindanao as the center of the IS in the region.