U.S. says display of warship, jets in West PH Sea not for China

'People can interpret the [warship's] presence as they wish, but the Wasp came here to be part of Balikatan,' says Lieutenant General Eric Smith, US Commanding General of the 3rd Marine Expeditionary Force 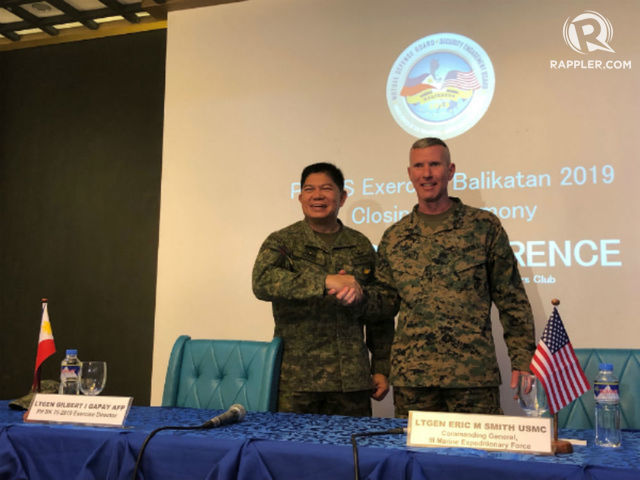 After the presence United States warship USS Wasp in the West Philippine Sea caught the attention of China, US Commanding General of the 3rd Marine Expeditionary Force Lieutenant General Eric Smith said on Friday, April 12, the display of military might was for no one else but the Philippines.

“People can interpret the Wasp's presence as they wish, but the Wasp came here to be part of Balikatan and it's highly successful…. The only person the Wasp is about is the Philippines,” Smith said in a press conference on the sidelines of the 2019 Balikatan exercise closing.

Philippine Balikatan Exercise director Lieutenant Gilbert Gapay echoed this, saying the presence of US forces in the West Philippine Sea was part of the planned exercises.

“The presence is not really to agitate or anything else but purely for training. So nobody should be alarmed by the presence of all these forces during the Balikatan,” Gapay said.

A PhilStar.com report quoted Chinese Foreign Ministry spokesman Lu Kang saying China “hoped non-regional forces will not stir trouble in the South China Sea” after the USS Wasp supposedly sailed near Scarborough Shoal – an area claimed by both the Philippines and China.

The F-35B Lightning II Joint Strike Force appears for the first time in the Philippines, onboard the US Navy's USS Wasp during the Balikatan 2019 amphibious exercises in Zambales

(UPDATED) Vietnam is not 'facing the same reaction from China's maritime militia forces as the Philippines recently has,' says the Asia Maritime Transparency Initiative 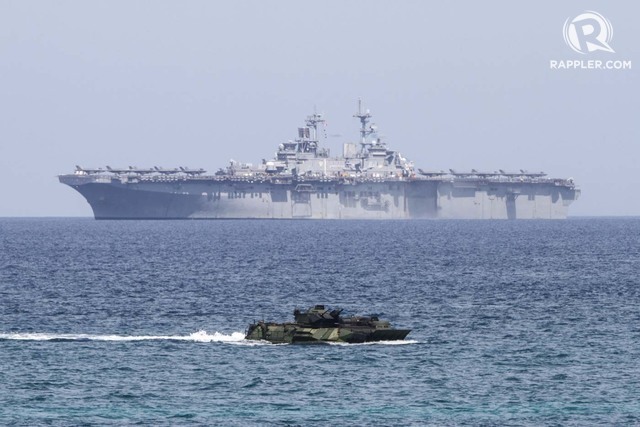 Sign of friendship: Meanwhile, aboard the USS Wasp were 10 of the world’s most advanced multi-role stealth aircraft, the F-35B Lightning II Joint Strike Force. Smith said the debut of the jets in this year’s exercises were a sign of deep friendship between the Philippines and US.

“I believe the CO [commanding officer] of the Wasp said it best – nothing says ‘I love you’ better than bringing a ship with 10 F35s on it because that's all I have to offer. We brought everything we could bring because the partnership with the Philippines is so good,” he said.

Beyond the yearly joint exercises between the US and the Philippines, the presence of the F-35s made headlines in several news outlets across the region. ([ANALYSIS] Balikatan: U.S. shifts gears from counterterrorism to great power competition)

The US military earlier said F-35s took part in the exercise to understand how to “best employ” their capabilities in the region.

Both the USS Wasp and F-35Bs were part of amphibious exercises, which took place on a naval base in San Antonio, Zambales, facing the West Philippine Sea. It is also over 200 kilometers from Scarborough Shoal.

The quiet show of force brought by the presence of the F-35s during the exercise comes amid rising tensions brought about by China’s incursion in the West Philippines Sea.

Despite this, both the US and Philippines repeatedly maintained the exercises were not aimed at anyone. Its main purpose, they said, was to strengthen cooperation between the two forces.

(READ: Balikatan vs China? Drills not aimed at any country, says U.S.)

https://www.rappler.com/nation/228029-us-says-warship-jets-for-no-one-but-philippines-balikatan-2019
Posted by Retired Analyst at 8:18 AM