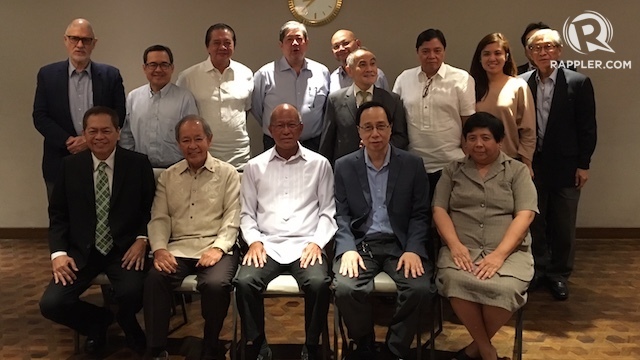 Defense Secretary Delfin Lorenzana briefed some of the country's top economists on the national security situation on Wednesday night, March 21.

Lorenzana gave an off-the-record security briefing to members of the Foundation for Economic Freedom, a group of economists chaired by former finance secretary Roberto de Ocampo, and boasted about the military's successes on the ground.

Lorenzana discussed the threat of terrorism and the communist insurgency, giving them a broad view of the status of military operations against these threats.

He also discussed the situation in Mindanao, where martial law was declared.

De Ocampo, who gave a glowing assessment of Lorenzana's performance as defense chief, said the FEF members welcomed the briefing especially as they look into the administration's economic policies.

"How can you pursue a Build Build Build, for example, if there is instability. This, I think, is a major part of looking at the overall situation, both locally and globally," De Ocampo told Rappler.

De Ocampo stressed the importance of Lorenzana's job. "National defense usually commands a very large part of the budget of an economy for the simple reason that without the stability that national defense is supposed to introduce, then economics becomes largely theoretical," he said.

"We were happy to be able to listen. I think many issues such as those that were brought out today including the South China Sea strategy, the military strategy in Mindanao, and NPAs are all very important to the economy," he added.

https://www.rappler.com/nation/198742-lorenzana-top-ph-economists-security-briefing
Posted by Retired Analyst at 4:19 AM