'This bill seeks to penalize any person who becomes a member or manifests his/her intention to become a member of any terrorist organization,' says Senator Gregorio Honasan II 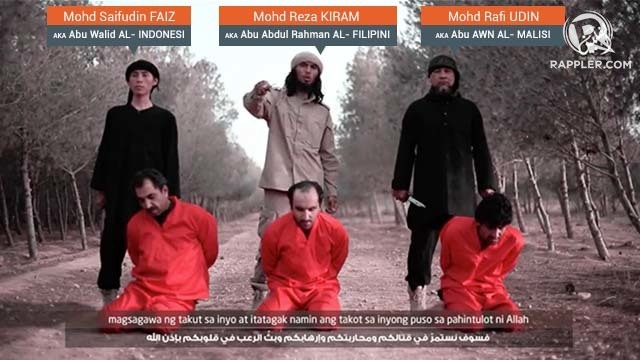 ISIS VIDEO. A young Filipino (middle) was among those who beheaded Caucasian hostages in June 2016. He called on Muslims to fight the jihad in Syria and the Philippines. Screenshot from ISIS video
A Senate bill seeks to criminalize membership in any local or terrorist organization.

Senator Gregorio Honasan II filed Senate Bill 1396, declaring as unlawful any membership in any terrorist group outlawed by the Philippines or designated as such by the United Nations.
In filing the measure, Honasan said terrorism remains one of the most serious threats to international peace and security.

"In order to strengthen our law enforcement arsenal against this evil, this bill seeks to penalize any person who becomes a member or manifests his/her intention to become a member of any terrorist organization," Honasan said in his explanatory note.

The bill states that: "It shall be unlawful for any person to knowingly become a member or manifest his/her intention to become a member of any Philippine court-proscribed or United Nations Security Council-Designated Terrorist Organization," including the Abu Sayyaf and the Islamic State, also known as ISIS, ISIL, or Daesh, among others.

Those found guilty shall suffer the penalty of reclusion perpetua or imprisonment for at least 20 years to 40 years.
The bill also states that no person shall be convicted of any of the crimes "unless on the testimony of at least two witnesses to the same overt act or confession."

No counterpart measure has been filed with the House of Representatives. But Quezon City Representative Winnie Castelo has filed resolutions urging the House committee on public order to investigate the establishment of ISIS networks in Mindanao.

Documents obtained by Rappler show that a Filipino millennial was among those who beheaded a Caucasian in an ISIS video released in June 2016.

ISIS has also called on its followers in Southeast Asia to fight for the terror group either in Syria or in the Philippines.

There is growing concern that ISIS militants in Syria could look for refuge in Southeast Asian countries as the terrorist group continues to lose ground in the Middle East.

In January, Philippine Defense Secretary Delfin Lorenzana claimed ISIS made direct links with Abu Sayyaf senior leader Isnilon Hapilon to look for a suitable area for a caliphate in Mindanao.

Hapilon also reportedly linked up with the Maute brothers in Central Mindanao.

The Philippine military has stepped up its offensive against the Abu Sayyaf, setting a deadline to significantly weaken the local terrorist group by the end of June 2017.

http://www.rappler.com/nation/165340-senate-bill-joining-terrorist-groups-isis
Posted by Retired Analyst at 12:05 AM