'The President is the chief architect of Philippine foreign policy. But this power is not his alone – he shares this with the Senate in the case of treaties' 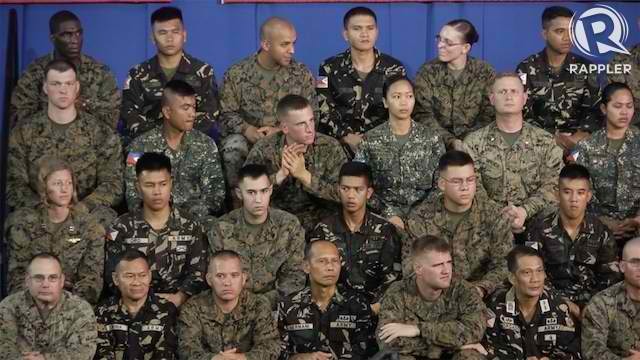 The Senate, not just the President, has a say on the country's foreign policy.

Liberal Party senators reminded President Rodrigo Duterte this on Friday, October 21, a day after he announced in China the Philippines' separation from the United States, the country’s biggest ally. (READ: Duterte announces military, economic split from US)

“The President is the chief architect of Philippine foreign policy. But this power is not his alone – he shares this with the Senate in the case of treaties,” LP senators said in a joint statement.

The Senate has the power to concur with the ratification of treaties entered into by the executive.
“Taking the President's statement literally entails an abrogation of the 1951 Mutual Defense Treaty with the United States, a binding security and military agreement. The Senate needs to be clarified if the President did indeed intend to terminate the MDT,” they added.

The MDT states that the two countries shall separately and jointly, by self-help and mutual aid, develop capacity to resist an armed attack.

In 2014, under the Aquino administration, the Philippines entered into a military deal with the US – the Enhanced Defense Cooperation Agreement (EDCA) – which was meant to increase the rotational presence of Americans in the country by allowing them to build facilities and preposition assets inside military bases.

On October 2, however, Duterte said he wanted the deal reviewed, threatening to cut ties with the US after its opposition to his war on drugs that had led to an increase in the number of extrajudicial killings.

Members of his Cabinet, however, downplayed the threat, saying it was not what Duterte really meant.

With Duterte’s recent pronouncement, LP senators are supporting Senate Resolution 158, filed by Aquino, calling on the Senate committees on foreign relations and economic affairs to conduct an inquiry into the foreign policy direction of the government.

The resolution came at a time when Duterte regularly issued conflicting statements on his foreign policy.

Allies of Duterte are handling the said committees: Senator Alan Peter Cayetano for foreign relations and Senator Sherwin Gatchalian for economic affairs. Both senators were with Duterte in his state visit to China.

The congressional inquiry, LP senators said, would “reveal” the terms of the 13 agreements and memoranda of understanding signed by the President during his state visit to China.

These include the reported $6 billion in loans, $3 billion of credit through private Chinese banks, and the Joint Coastal Guard Committee on Maritime Cooperation in the disputed waters.

“The Filipino people deserve to know what the official position of the administration is and how these affect the lives of our countrymen residing in all corners of the globe,” senators said.

China and the Philippines have been locked up in a long-standing dispute over the West Philippine Sea (South China Sea). The relationship turned all the more sour under the Aquino administration, which brought the issue before an international tribunal. In the end, the Permanent Court of Arbitration ruled against China.

The 4 party mates of former President Benigno Aquino III reminded Duterte that the 1987 Constitution mandates that the country fight for its sovereignty and territory, especially in the West Philippine Sea.

Earlier, De Lima issued a separate statement, calling Duterte's policy of breaking ties with the US as "a whole level of betrayal" against the Filipino people.

http://www.rappler.com/nation/149938-duterte-treaties-need-senate-concurrence-lp-senators
Posted by Retired Analyst at 6:45 AM