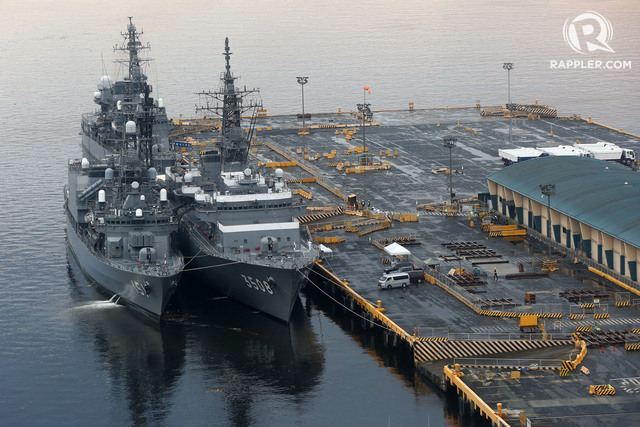 On the eve of President Rodrigo Duterte's visit to Japan, 3 Japanese ships arrived in Manila on Monday, October 24, bringing navy officers for a series of meetings with their Philippine counterparts.

"The Training Squadron of the Japan Maritime Self Defense Force (JMSDF) berthed here today for a five-day goodwill visit to the Philippines from Oct. 23 to 27," the Philippine Navy said.

A customary welcome was conducted by Philippine Navy vessel BRP Rajah Humabon (FF11) at the vicinity of Corregidor Island, where it escorted the Japanese vessels to their berthing area.

"The visit is another gesture of fostering goodwill which contributes to the furtherance of friendship between the PN and JMSDF established through the years with continuing commitment to promoting naval diplomacy and camaraderie," the navy said in a statement.

Japan and the Philippines stepped up security cooperation during the previous administration of President Benigno Aquino III against the backdrop of China's aggressiveness in the South China Sea.
Japan donated ships to beef up the fleet of the Philippine Coast Guard.

In 2015, Philippine and Japanese navies flew together over the West Philippine Sea for the first time since the World War 2. The two countries also began talks on a possible visiting forces treaty that would allow Japanese troops in the Philippines.

How the Duterte administration is going to proceed remains unclear as the President pivots to China and away from the US, a key ally of Japan.

Duterte has said that Japan might, "depending on developments," join talks between the Philippines and China to resolve overlapping claims in the South China Sea.

Duterte's state visit to China last week resulted in, among others, a Memorandum of Understanding (MOU) on the establishment of "joint coast guard committee on maritime cooperation."

http://www.rappler.com/nation/150189-japan-navy-duterte-visit
Posted by Retired Analyst at 3:55 AM