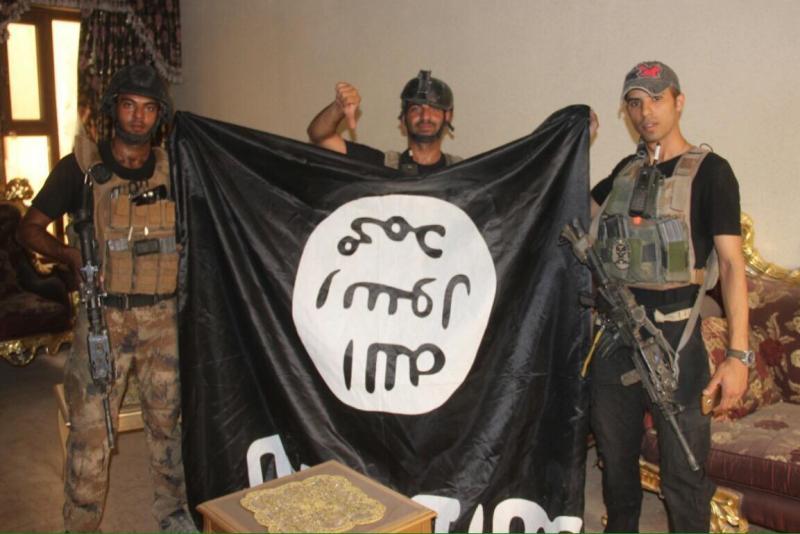 In this image taken by an Iraqi Counterterrorism Service photographer on Sunday, June 19, 2016, soldiers pose with an Islamic State militant flag in Fallujah, Iraq after forces re-took the city center after two years of IS control. Thousands of civilians are fleeing Fallujah after the city was declared liberated from the Islamic State group, the United Nations said, while an Iraqi commander reported fierce clashes as elite counterterrorism forces pushed to clear out the remaining militants. Iraq Counterterrorism Service via AP

The so-called Islamic State, or ISIS, released a video early on Wednesday in an attempt to recruit radical fighters in the Philippines and neighboring countries.

Screenshots of the video taken by the agency show Filipino, Indonesian and Malaysian fighters urging their countrymen to join their ranks in Syria. But for those who could not reach the Middle East, the group also gave them an alternative.

"If you can't get to Syria, 'join the muhajideen in the Philippines'," the terror network said, as quoted by Katz on her Twitter account.

Describing the content of the video, deep web monitor Vocativ said the ISIS has appointed a leader in the Philippines by the nom de guerre of Abdallah al-Filipini, a representative of the self-dubbed caliphate.

The release of the video did not surprise Katz, who noted that the Islamic State has also released an infographic claiming the presence of its network in the Philippines.

In the graphic released earlier this month, ISIS claimed to have 10 fighting battalions in five different locations in the country. It also claimed that ISIS followers mostly in Basilan have killed 289 people since April 2015.

Philippine military spokesman Brig. Gen. Restituto Padilla said the public should refrain from sharing and distributing the video, saying its values are inhuman and evil.

"People should not be bothered by this because it's part of the propaganda they are propagating," Padilla told the Straits Times in a report Thursday. "Let's not dignify this... Let's do what is right, which is to delete it and don't pass it to others."

Security officials in the Philippines denied the presence of ISIS fighters in the Philippines, but noted that several radical groups such as the Abu Sayyaf have pledged allegiance to Abu Bakr al-Baghdadi, the Islamic State's self-appointed caliph.

Last week, the Abu Sayyaf beheaded its second Canadian hostage, Robert Hall, after its demands for ransom were not met by the Philippines and Canadian governments.

Canadian Prime Minister Justin Trudeau, American President Barack Obama and President Benigno Aquino III condemned the execution of Hall, but insisted that ransom will not be settled with extremist groups.

Security forces have intensified operations against the Abu Sayyaf following the beheading. On Tuesday afternoon, three Abu Sayyaf fighters were killed while 16 soldiers were hurt in a clash in Sulu.

US Attorney General Loretta Lynch said Tuesday that countering jihadist propaganda continues to be a challenge for the government.

"How do we break that chain? How do we counter this extremist ideology that's online, knowing that the internet has to remain free and open? What can we get out there that's a counter-message to that?" she said in an interview with the Associated Press. Her statement came amid investigations of a recent massacre on a nightclub in Orlando by a gunman allegedly inspired by the ISIS.

Just two weeks ago, the Islamic State had suffered setbacks in Syria, Iraq and Libya where the Sunni militant group captured large tracts of territory in Iraq and Syria two years ago.

Seesaw battles raged in Syria's Raqqa province, with ISIS fighters retaking areas from government forces Tuesday. Two days earlier, the Syrian troops briefly seized an ISIS-held oilfield in Thawra and threatened to retake the Tabqa air base, which would have opened a direct line for troops to the militants' self-styled city of Raqqa.