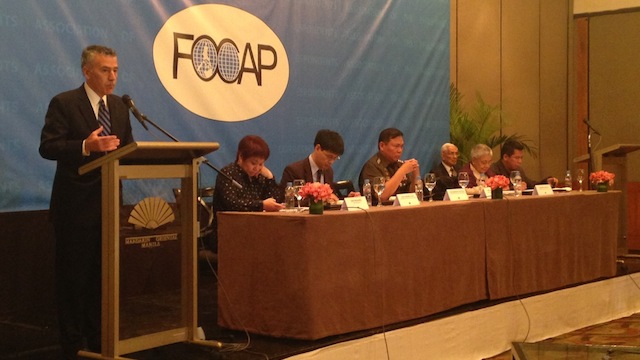 ambassador to the Philippines Philip Goldberg. Photo by Carmela Fonbuena/Rappler

"There is no such thing as 9-dash line," United States ambassador to the Philippines Philip Goldberg told reporters on Monday, February 24, reiterating his country's rejection of China's basis for claiming portions of the South China Sea that are closer to the Philippines.

"We do not believe that the 9-dash line claim passes the legal test for determining or resolving disputes over South China Sea matters," Goldberg said during the annual prospects forum of the Foreign Correspondents Association of the Philippines in Makati City.

[Video: 'No such thing as 9-dash line' -- US envoy
http://www.youtube.com/watch?v=t7FYWScJYxE]

The ambassador was reiterating the statement of US Assistant Secretary of State for East Asian and Pacific Affairs Daniel Russel before the US Congress earlier in February.

Russel's statement is considered the first time that the US publicly rejected China's 9-dash line claim in the South China Sea. More US policymakers and military officers have since issued strong statements against China's aggressiveness. (WATCH: Expect stronger US message VS China's aggression)

The US supports the move of the Philippines to bring the maritime disputes to the United Nations body, the International Tribunal for the Law of the Sea (ITLOS).

The US maintains it is not taking sides on the maritime disputes but it has taken a position against any unilateral move to change the status quo. The US also opposes the establishment of the Air Defense Identification Zone (ADIZ) over the East China Sea and similar attempts to do the same over the West Philippines Sea.

Treaty allies, the US and the Philippines are finalizing a military-to-military agreement that will increase the presence of American troops in the Philippines. The Philippines sought the help of the US against the backdrop of escalating sea tensions.

"The Philippines has embarked on a program to build a minimum credible defense as is the right of sovereign nations. The US supports that effort. Nations need to be able to protect their borders and defend their people not just from traditional aggression but from transnational crime, smuggling, and international terrorism," Goldberg said.

The request of the Philippines coincides with the US strategy to rebalance to the Asia Pacific. Goldberg said the US wants to deepen alliance with the Philippines for the following interests: commercial, people to people, military and strategic ties.

"Note the order in which I put those priorities. If you think about the genesis of the rebalance, it starts on the recognition of the rise of Asia – the rise of China and Southeast Asia in terms of economic growth, population growth, and trade," he explained.